This morning Mark told me he didn’t sleep most of the night because of dogs barking in somebody’s back yard.  I woke up with a swollen eyelid because something bit me during the night.  Before I even got out of bed I was on my laptop looking for another place to spend tonight.  We grabbed all our stuff and were out of the tree house before anyone else was out of bed apparently.  We may not be able to get our money back for tonight at that hostel, but it’s worth it to be in a motel tonight!

We stopped and got some breakfast and then headed up toward the Arctic Circle.  Most of the campers I’ve heard talk about this trip say it’s miserable in bad weather, but the weather today couldn’t have been better!  We left Fairbanks with a nearly full tank of gas and drove to the place where the pavement ended.  Then there was a long stretch of gravel road, including a place where we had to follow a pilot car through some construction.

After about three hours we got to the Yukon River Crossing.  There was a tiny information center there and we got a certificate that said we’d crossed the Arctic Circle, although we hadn’t yet.  The ranger made us promise we would if she gave us the certificate.  It was another sixty miles before we actually arrived at the Arctic Circle.  We stopped and a group of young workers offered to take our picture holding our certificate in front of the Arctic Circle sign.

At that point we were beginning to get worried about gas.  We hadn’t seen a gas station in hours, nor a place to eat.  We drove another sixty miles to Coldfoot where we pulled into the gas station with only one bar left on our gas gauge!  Fortunately they also had a little restaurant.  We’d forgotten to take any food with us and it was a five hour drive there from Fairbanks.

While we were eating, a couple sat at the table next to us who were from Wisconsin.  I got into a conversation with them and found out that the man has the largest collection of Sears and Roebucks Ford tractors in the country.  He has ten of them, and he comes up every other year to show them at the parade in Palmer.  He gave me a copy of a newspaper article about his tractors and a DVD about them too.  You never know what kind of interesting people you’ll meet!

Having eaten and gotten gas, it was time to head back to Fairbanks.  Mark was tired so I drove part of the way back.  On our way past the Yukon River Crossing, we saw that there was a gas station there we could have stopped to gas up.  No matter.  My Prius got us all the way back to Fairbanks on the tank from Coldfoot.

We gratefully checked into our motel, went and got a little something to eat, and then I downloaded our pictures from this trip.  Here are some of them: 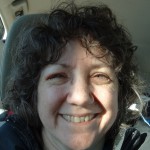 The eye in shadow is swollen from a bite 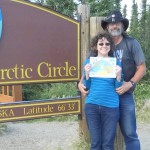 At the Arctic Circle 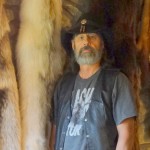 Mark at the visitor center in Coldfoot 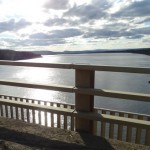