This morning Mark and I went over to Mom’s house.  She made lunch for us and started an unintentional fire, but Mark’s quick thinking saved the day.  After lunch, he stayed and fixed her garbage disposal which hasn’t worked in several years.  This afternoon, he was called to work.

I went home and Wendy came over and told me she was going to a Christmas bazaar that a friend of hers had told her about and asked if I’d like to come.  Wendy had deposited a bunch of our bottles for me and given me the money so I used that to buy something at the bazaar. 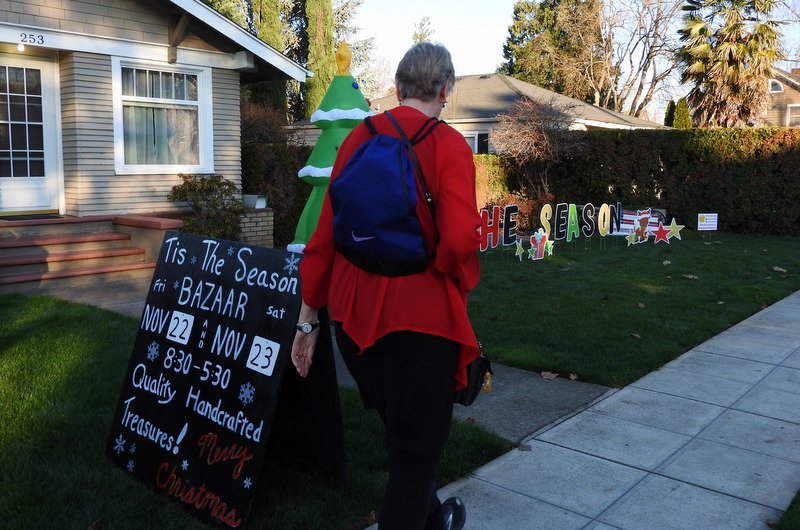 Wendy approaching the house where the bazaar was 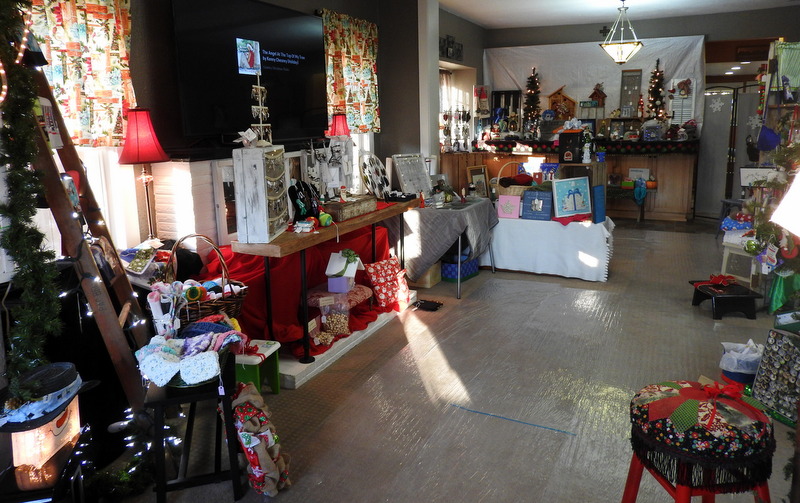 Wendy’s friend holds this bazaar in her living room every year. She moves the furniture out and sets this up for a few days and then turns it into a living room again for Thanksgiving! 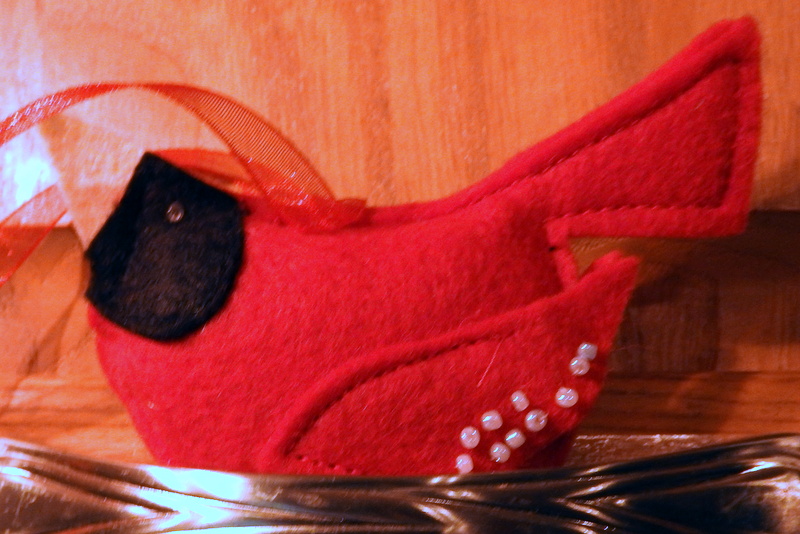 I bought this cardinal ornament. It reminds me of Wisconsin.

I always expect traffic to be heavy around downtown Portland, but usually, when I take my exit toward Swan Island, traffic lightens up some.  All the rest of this week, I’ve made it to class half an hour early and had time to eat a packed dinner in the parking lot.  However, tonight when I got off on the exit, traffic slowed to the point where I never got above zero miles per hour.  It is possible to move a little and still be going zero miles per hour, but it’s very frustrating.  Both northbound lanes were stop and go and I noticed a whole bunch of UPS trucks lined up in the lane next to me.  I was sitting next to one that had the side door open, so I rolled my window down and asked the driver if he could see what was going on from his vantage point.  He said it looked like there was a pile-up.  That’s when I called Mark and asked him to call UPS and see if they could contact my instructor to let him know I’d be late.  Mark was still working with his driver and his driver was able to send a message through his computer.  I was nervously watching the time and finally started eating my packed dinner.  When I got up to where I could see what was going on, police were blocking the route I usually take and directing us all to take a different road.  I finally managed to get parked and then I ran from the guard gate to class.

My instructor put me in a different room from where the main group was taking their test because all those computers were taken.  The room I was in had about six women from the class and me.  Poor Jett was running back and forth between the rooms to help anyone who had questions.  I started the test and got stuck on a question, so I asked the other women about it and they said they hadn’t had that question on their test, so I went to ask Jett.  (He had told us we could ask for help from each other or him during the test.)  He gave me the answer to the question and I moved on, but the other women were talking and I was having a hard time concentrating.  That part of the test was on Hazmat, the section I had fallen asleep during when we saw the videos, and I missed a question.  Because you have to pass the test with 100%, I had to retake that section two more times until I passed it.  I continued having trouble focusing with the others talking around me, but I did notice that one time when Jett came into the room, the others hadn’t recognized the question I needed help with because they all missed the instruction on how to take that test, so they had to go back and take it.  I at least felt good about being able to understand the instructions!

As people finished, those who were going to be working at Swan Island were taken to meet their trainers and do about half an hour of their job.  Those of us who are going to Tualatin next week were allowed to leave when we finished.  However, I believe I was the last to finish.  Before I left, Jett told me that I am to report to Tualatin on Monday at 6:00, so they do have work for us!

Jett also told me that he had heard someone died in the accident I got stuck behind.  I guess I should have been more concerned about what had happened up ahead rather than being so worried about being late for my test.  I’m glad to be done with that drive through Portland, but I’m sorry for the survivors of the person who was killed.