Today, Mark and I got to sleep in, and then we did some fun things…

This is our last full day next to Wendy’s and Craig’s house.  Tomorrow after church, we will be moving to Champoeg State Park, but we weren’t sure where it was, so this morning we decided to go look for it. 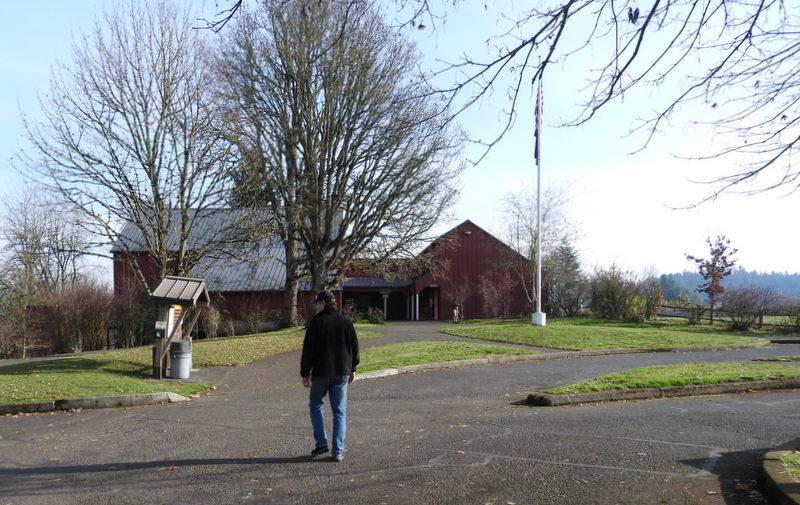 This is the visitor center. It has a really nice display of the history of the area.

There was a couple volunteering at the visitor center.  The man was reading a book about Herbert Hoover and he told me a little about him.  The only thing I knew about him before was that he was a US president, but he apparently lived in Newberg, Oregon from the time he was twelve until he was seventeen.  Then he was in the first graduating class from Stanford University where he studied geology.

While Mark and I were there, we watched a film about Champoeg.  This was where some of the early settlers decided to form a government that ended up helping to create the state of Oregon.  There was also a bad flood here in 1861.  The volunteer showed me a map of the park and put a dot on it where he said there is a tree with a monument forty-seven feet high that indicates how high the water rose.  There was another flood, not quite so bad, in the 1990s.

We drove down to the campground where we’ll be staying the next few days.  It’s pretty and seems to be quite peaceful.  There’s a pet exercise area where Tucson can run without a leash near the site we’ll be in.

After that, I wanted to see where the Tualatin UPS hub is that I’ll be starting work at on Monday.  It’s considerably smaller than Swan Island, thank goodness!  A guard in the guard shack saw us drive around the parking lot and came out to talk to us.  I told him I’d just finished training and was going to start there this week and wanted to see where it is, so he welcomed me. 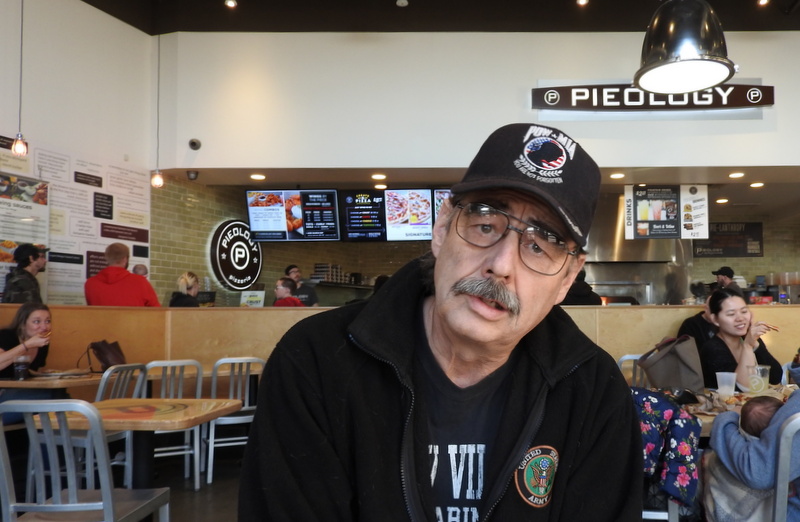 For lunch, we stopped at Pieology for pizza, and Mark made a funny face. 🙂

After lunch, Mark drove to Home Depot to get a new outlet to replace one in Mom’s kitchen that hasn’t been working, and then we went to Mom’s house where he installed it.  Mom and I played a game of Bananagrams and were just starting another when my sister, Lauryn, and her family arrived from Klamath Falls in southern Oregon.  There were hugs all around and then we sat down to visit.  They have come up for the week and it was sure good to see them!

This evening, Wendy and Craig had us over for our last dinner as their neighbors.  I know that they are modest and probably don’t care to have their praises sung, but they have been such a blessing to us.  Jesus told the parable about the sheep and the goats.  The sheep were told that they were blessed because they had clothed and fed and taken care of the “least of these” and they were credited as having done it “as unto the Lord”.  That describes, perfectly, what Wendy and Craig have done for us these last two weeks.  I won’t go into detail and embarrass them, but they have gone way above and beyond the bonds of friendship.  Mark and I have been praying for special blessings on them because there isn’t any way we can repay them for their many kindnesses.  Wendy and Craig, you guys have been extraordinary and words cannot express how very grateful we are for all you’ve done for us!