I was talking with my mother on the phone this morning and told her I had gotten some pictures of a storm we had here last week.  She said she would like me to post them on my blog so she could see them.  I also took a few pictures last night when Mark and I had a bonfire in our back yard with some more of the tree limbs and things we’ve been trying to get rid of this summer. 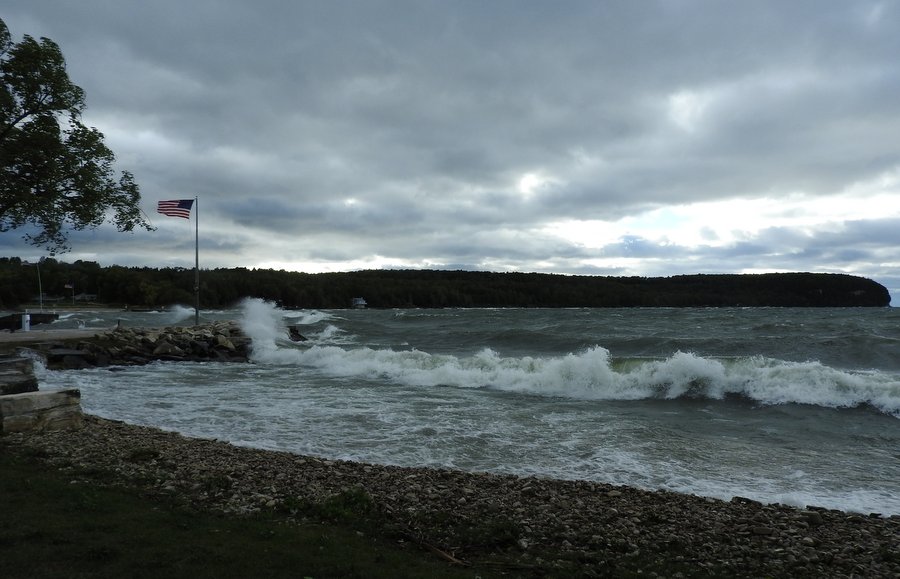 This is Ellison Bay. Normally it’s as smooth as glass. 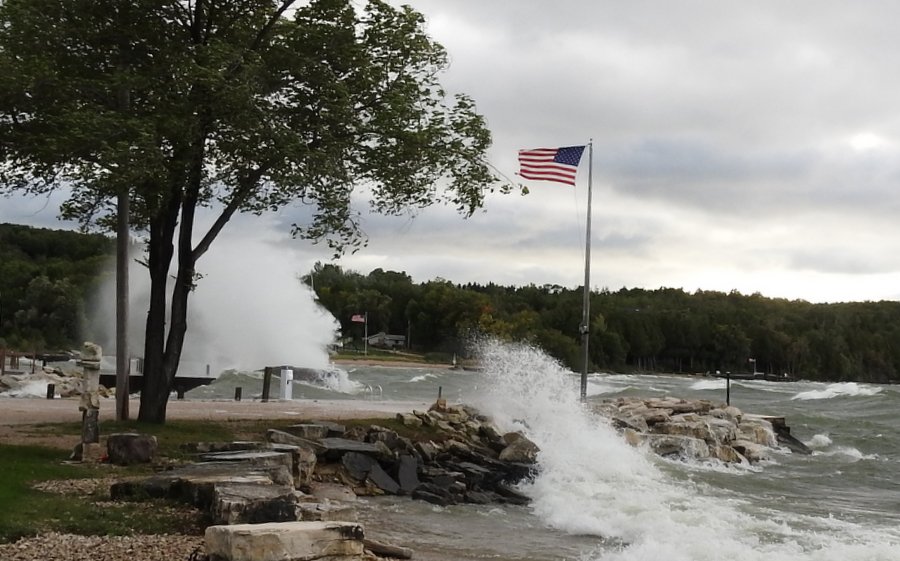 There’s a pier in the foreground and a dock in the back. You can also tell how hard the wind was blowing by looking at the flag. 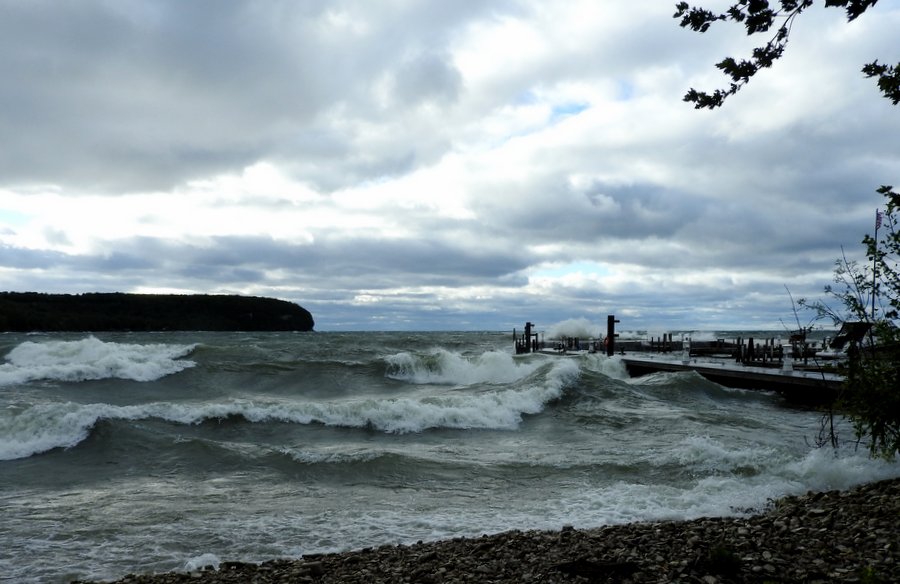 This was a dock to the right of where I was standing. 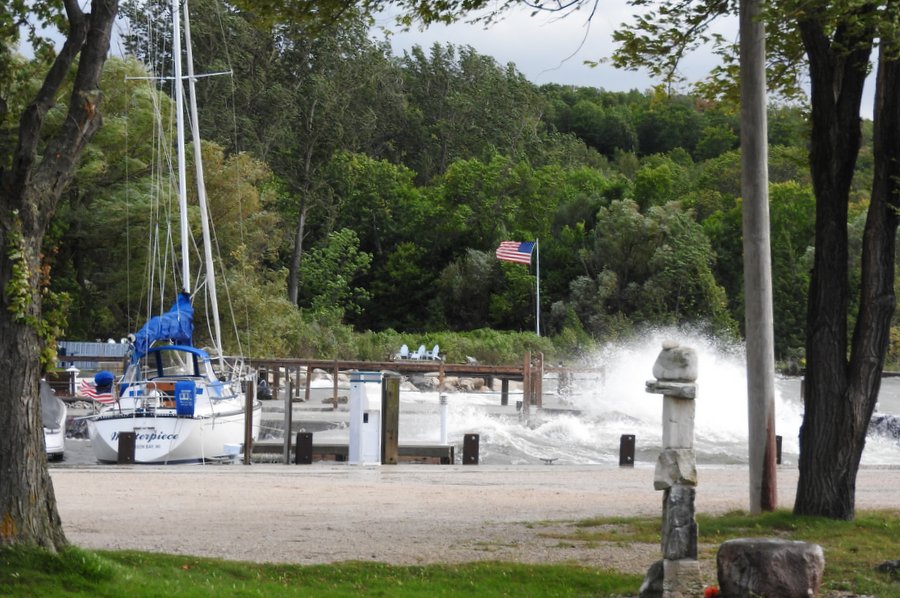 This docked sailboat was rocking back and forth as the waves crashed over the barriers. 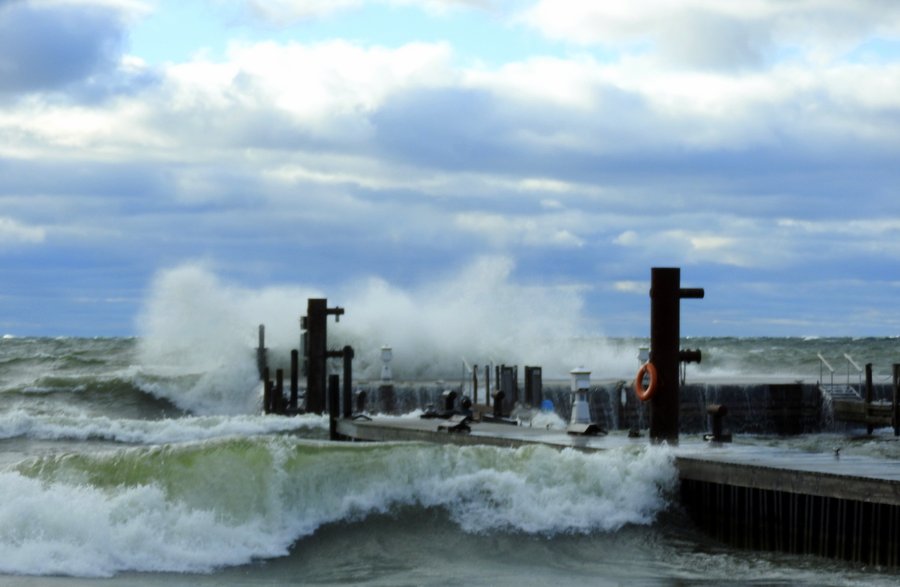 I had taken Tucson on the walk with me to the bay and tied her leash to a park bench. She was going wild with fear till I stepped closer to her and she could lean on me.

I was wondering how the house on the far shore was holding up. 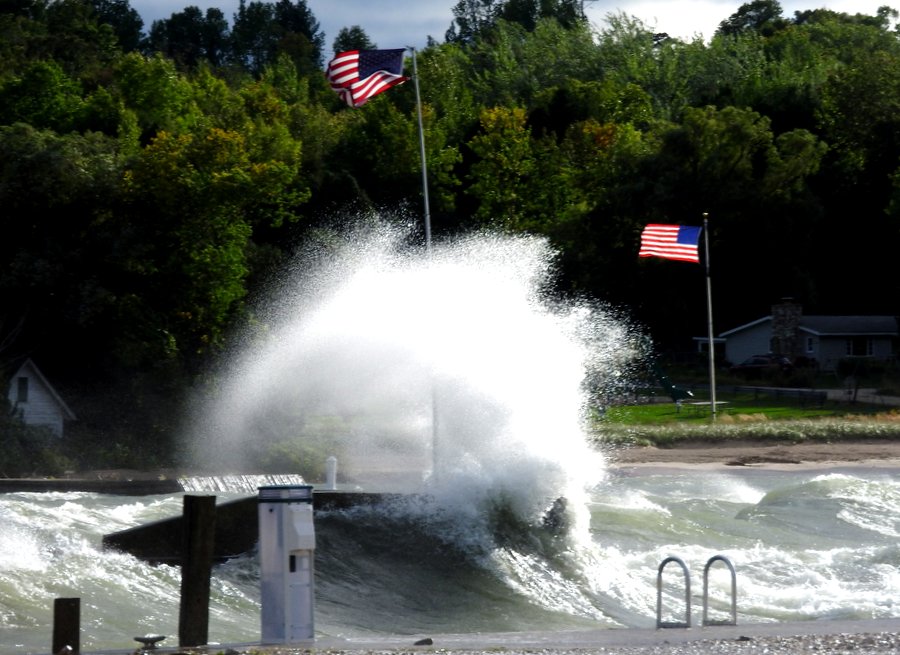 The docks were taking a beating! 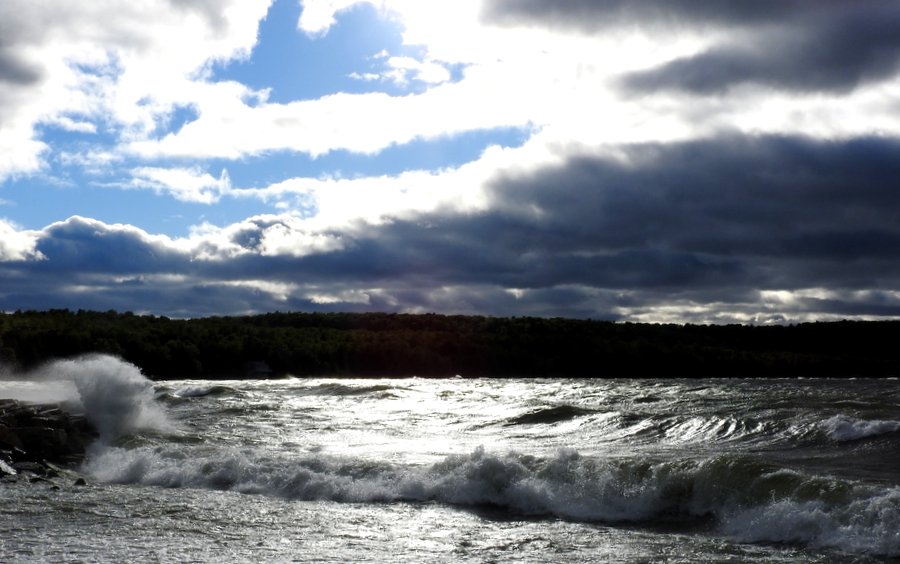 A little sun broke through and made a silver trail on the water. 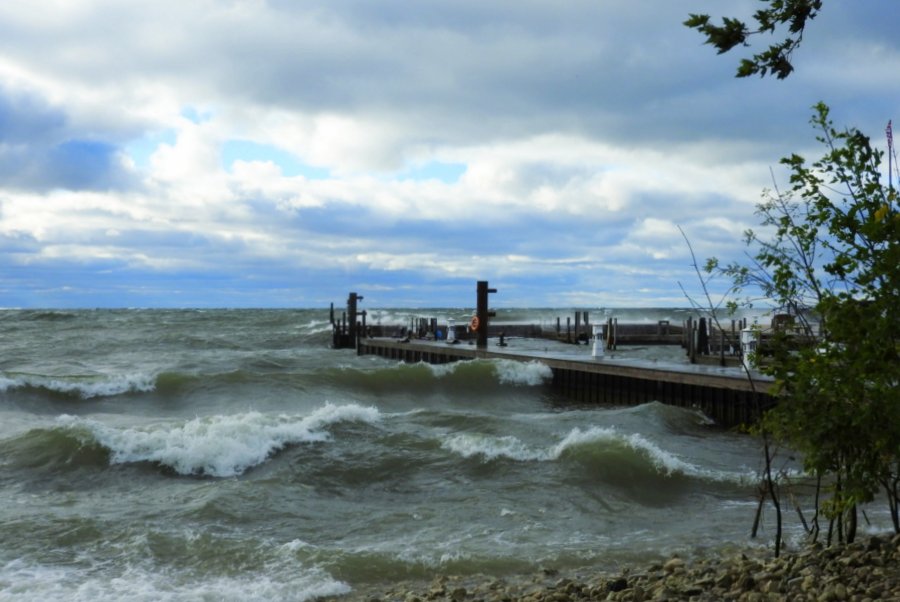 I finally took pity on Tucson and left after taking this shot.

The next day as I was driving to work on back roads, I saw a tree that had cracked and fallen into the cemetery next to the Moravian church.  The storm was pretty wild, but this is about the time of year we get our wildest storms.  It’s almost ho-hum after you’ve been through a few!

Then yesterday afternoon, I took Tucson with me to the grocery store, and as I was driving down our street towards home, I saw a pillar of fire over the trees.  Mark had finally remembered to get a burn permit and had set a huge pile of branches we had already stacked up in the back 40 on fire.  Fortunately, there wasn’t any wind.  I went in and changed and went out to help load some more branches on the fire.  We kept at it till after dark and Mark sent me to the house because my face was getting red again.  When I went back, I got my camera and stepped out onto the deck to take pictures of the fire through our little forest out back. 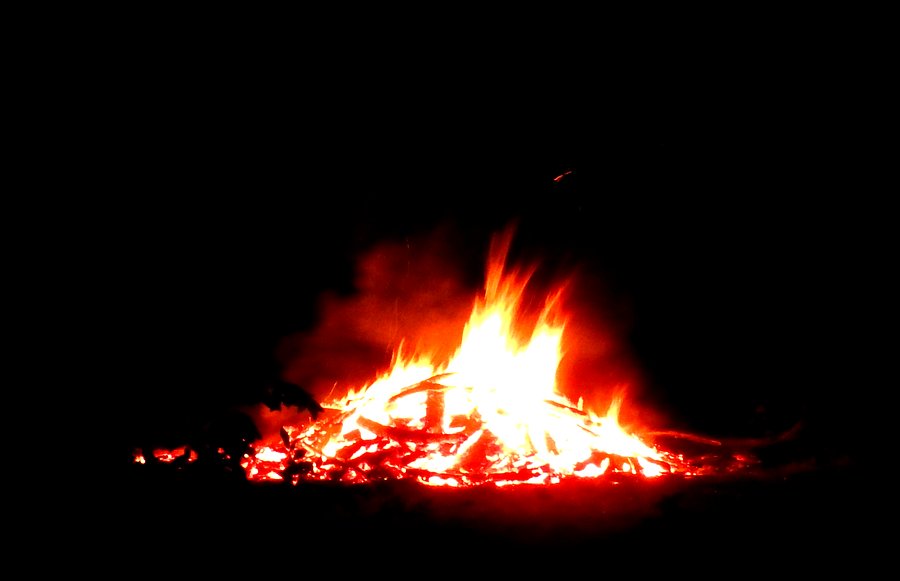 The fire wasn’t shooting up as high by this time, but it was sure burning hot! 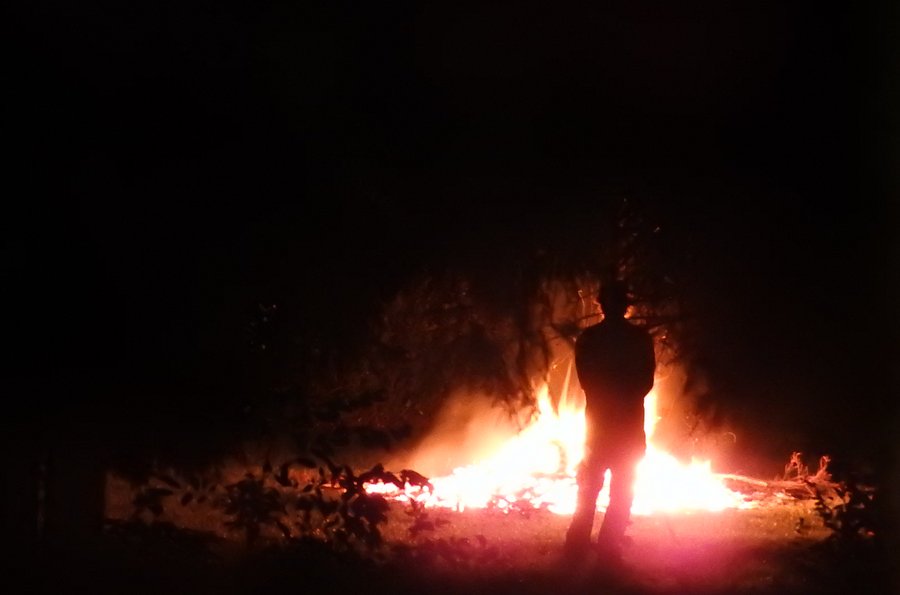 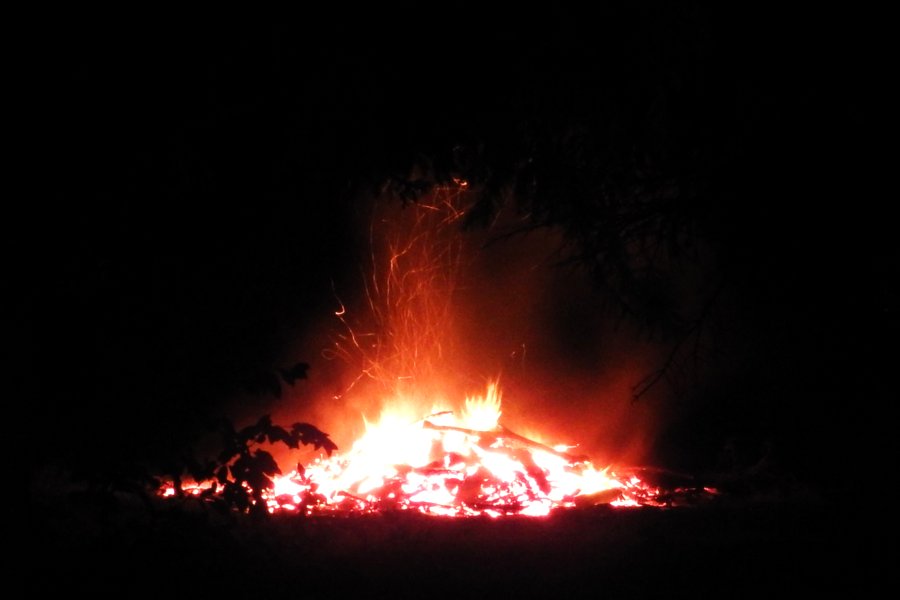 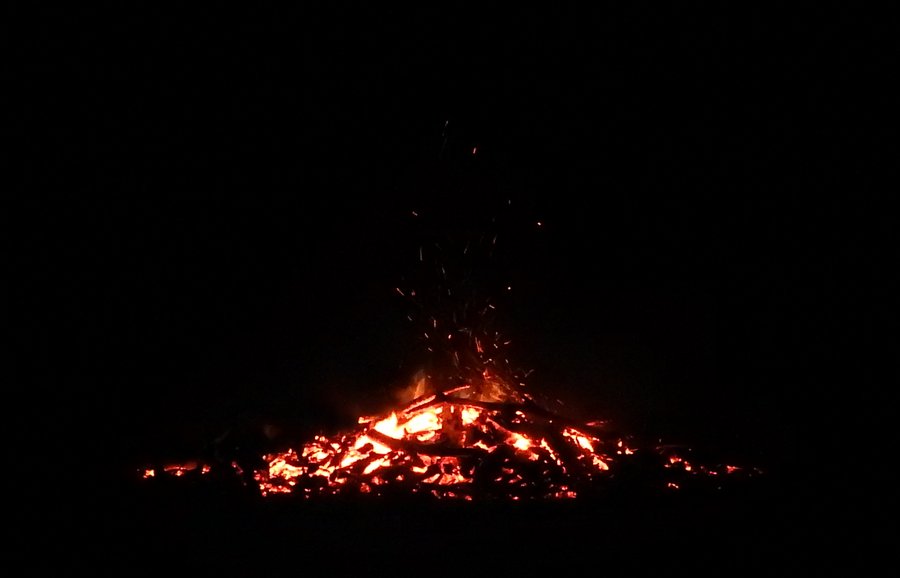 Beginning to die down

Mark took Tucson out this morning to do her business and he told me the ash pile was still smoking.  We don’t have enough branches left to make such a big fire next time, but I enjoyed this one while it lasted!