Every so often, I took a picture even though there wasn’t much to see. 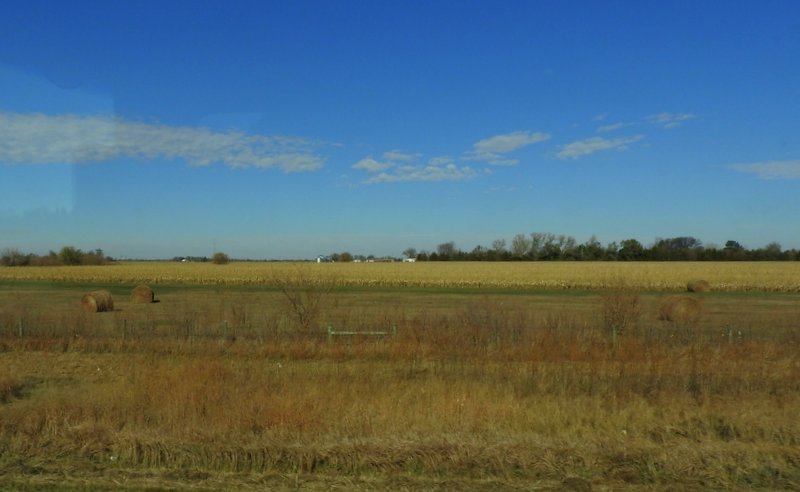 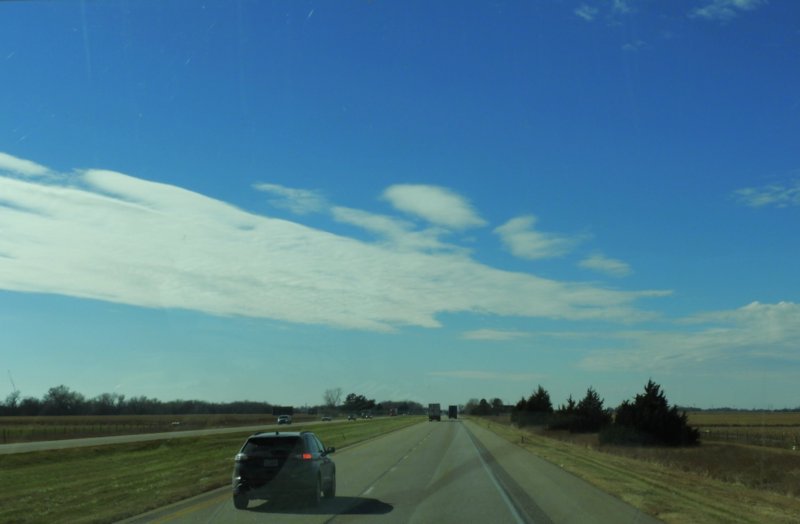 One bright cloud ahead of us 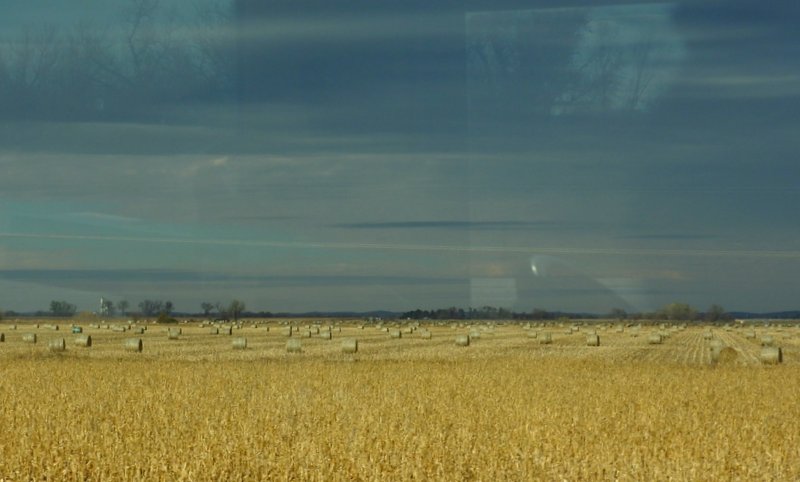 Hay rolls under a dark sky 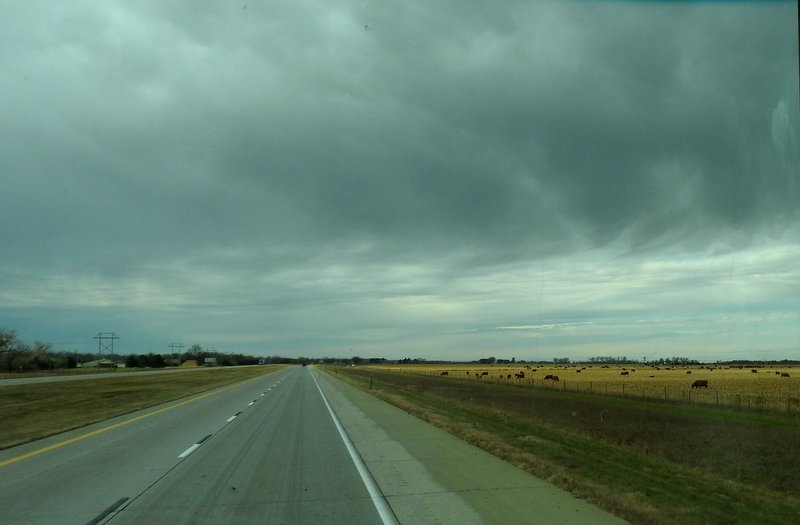 Cows in a bright spot 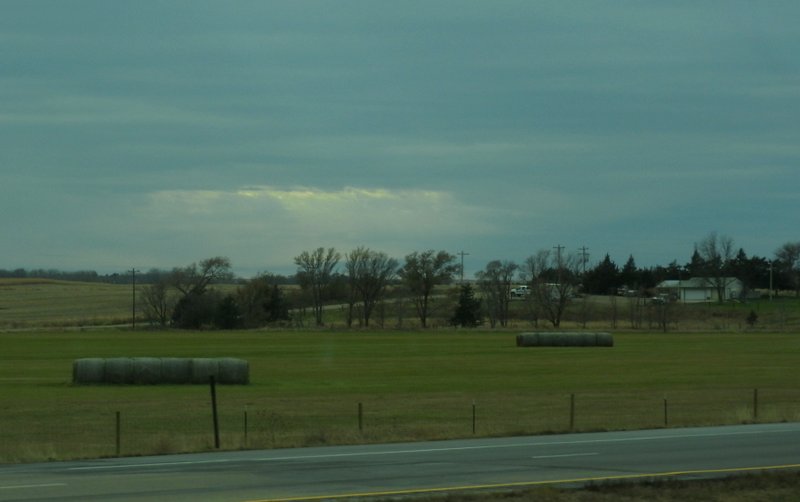 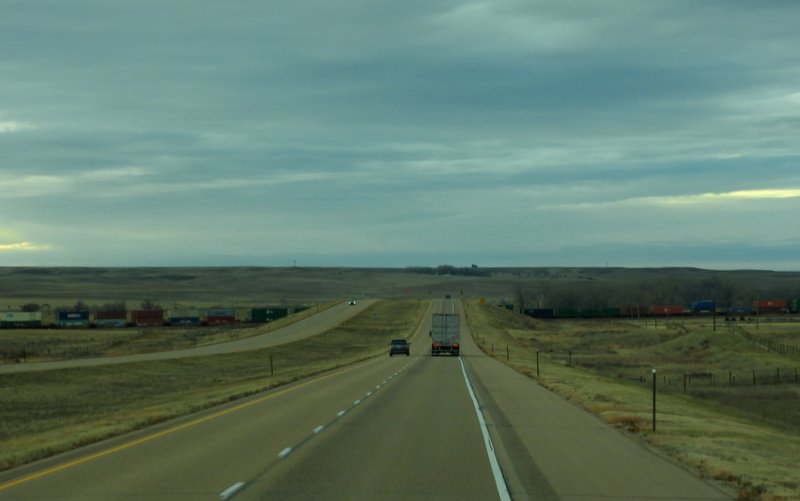 A train going under the highway 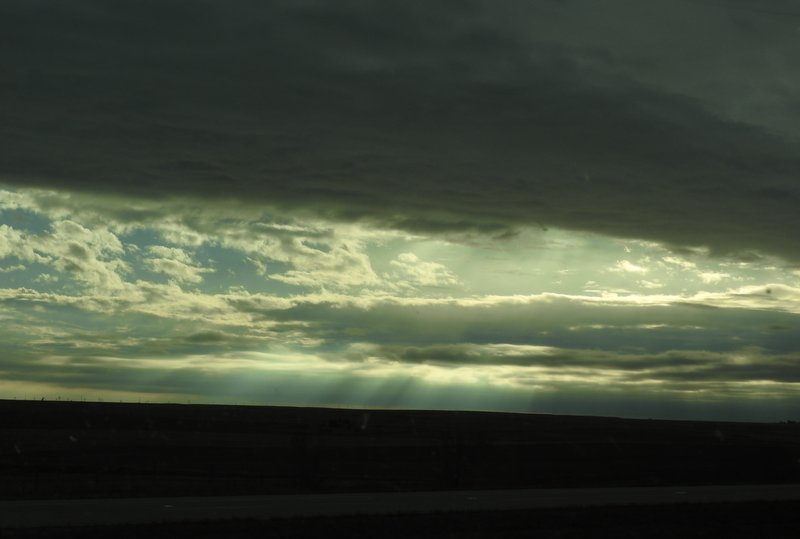 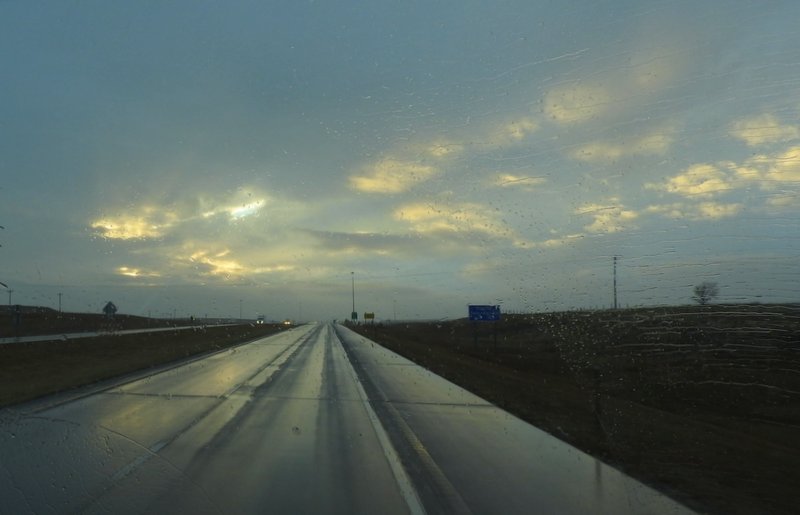 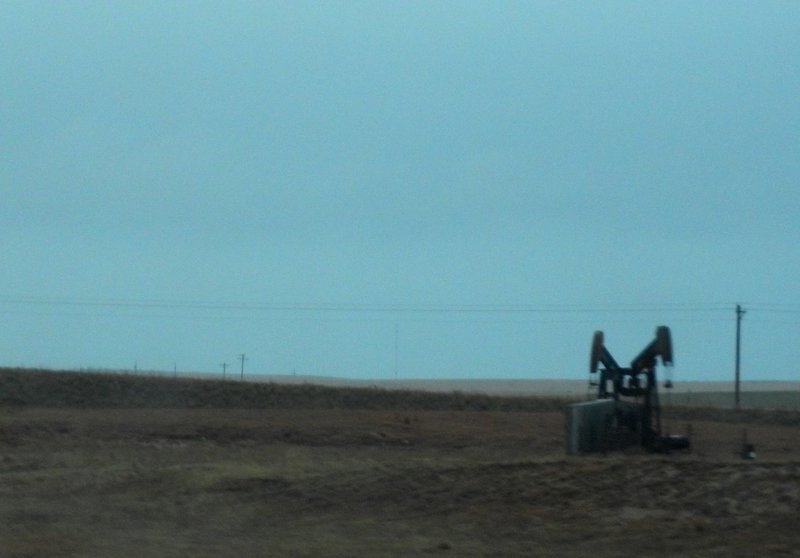 Toward the western edge of Nebraska, we began seeing some oil rigs.

Somewhere before this, we entered Mountain Time. We are now one hour from Door County and one hour from the Pacific NW, so to speak. 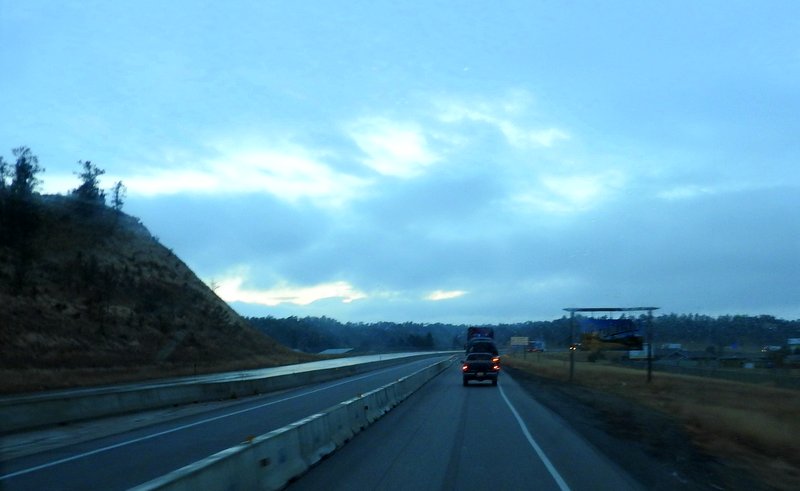 The sign to the right is welcoming us to Wyoming.

We should have stopped in Pine Bluff just over the border, but Mark thought we could make it to Laramie before dark.  We were forgetting that not only had we crossed a time line, but there was a change to Standard Time last night. 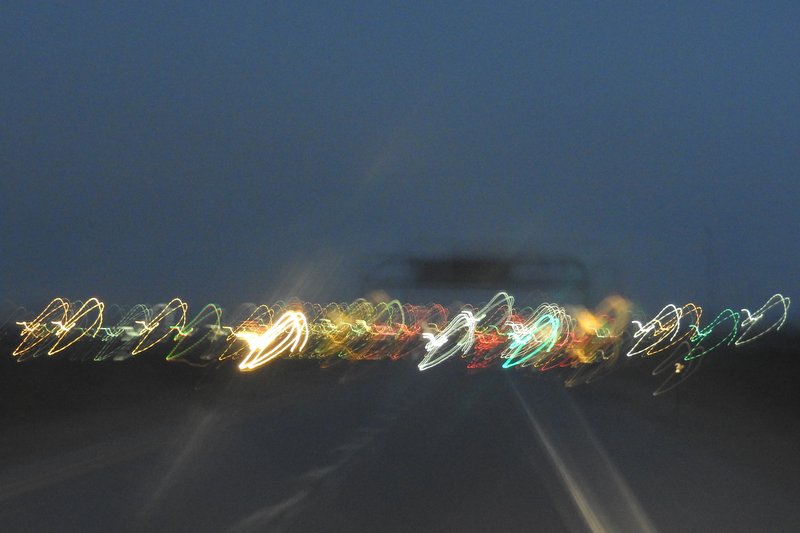 At dusk I saw lights ahead and took a timed shot. 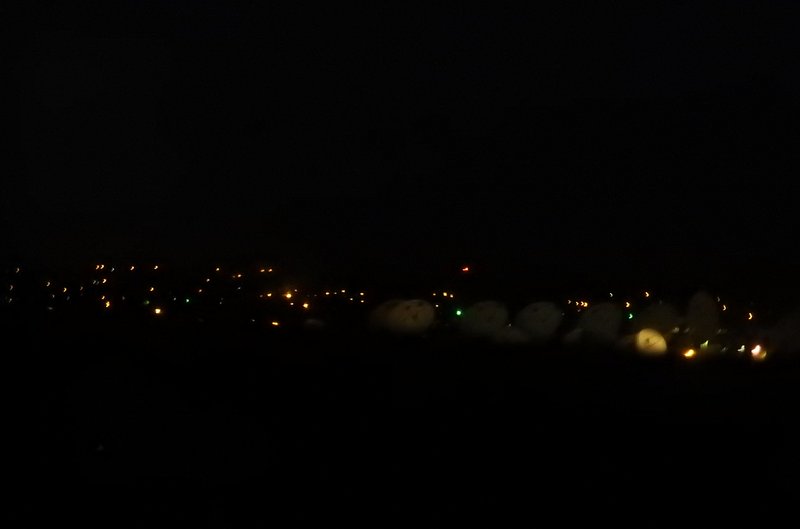 The kind of glowy things on the right are a bunch of satellite dishes clustered together.  I don’t know if they are listening to space or just trying to get good TV reception in the middle of nowhere. 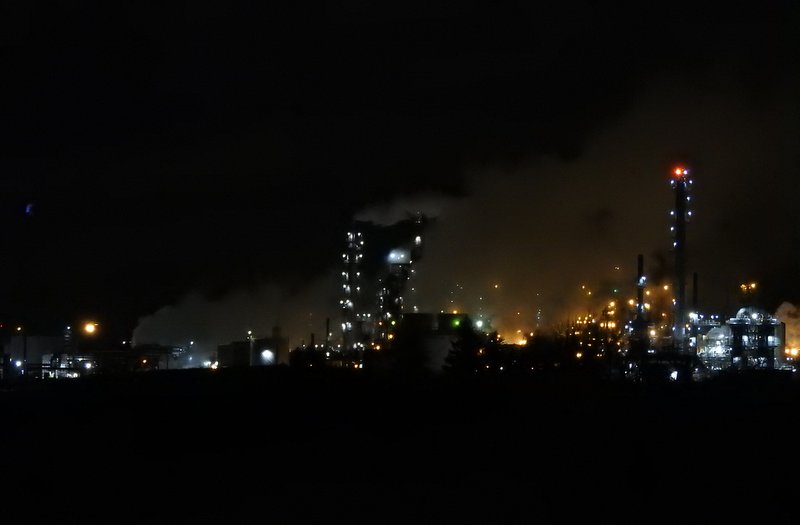 For some reason they light oil refineries up like Christmas trees. It looks kind of pretty at night.

We realized it was too dark to go on to Laramie so we began looking for a place to stay in Cheyenne.  Mark’s GPS didn’t find any Walmart’s in Cheyenne, but when we got close we found one that would allow us to park overnight.  Our only other option was to stop at a place we read about that didn’t have any restaurants near it.  I don’t know if they had groceries, but we were grateful to be able to get some food at Walmart when we got here.  With our little refrigerated cooler we can’t stock up a lot of food so we run out of things almost daily.

We traveled nearly five hundred miles today, with Mark driving for eight hours.  We have not only made up for lost time, but we are now ahead of schedule by a couple days.

This being Sunday, my younger sister has asked me to share something with my readers.  She has been giving money on occasion to a beggar in the parking lot at her grocery store in Klamath Falls, OR.  Over time, she began asking him a few questions and a couple weeks ago, she and her husband had an opportunity to get more of his story.  He and his wife have been homeless in Klamath Falls since July of 2016.  At that time, their car broke down, all their savings were stolen, and when Eric tried to get work, he fell and shattered his heel.  One broken down vehicle they sheltered in caught fire and they lost the last of their possessions except for their dogs.  They want to get back to Texas.

My sister and her husband have given them the car they were saving for my nephew when he graduates from college.  They put the couple up in a hotel until the car title could be transferred to them.  Eric and Jo should be on their way in the next day or two.  Their only problem now is that when they get to Texas, they have nowhere to stay.  These are people who were living a middle class life when they left Texas.  Their dream is to buy an old RV, even if it isn’t running, and live in it.  They think they can get one for $5000 or less.  They started a GoFundMe page some months ago, but there has barely been a response.  My sister has asked me to post the link and ask if any of my readers would be willing to help.  The link also has a more detailed version of their story than I have shared.  Here is the link:

Some of you may have seen this on my Facebook timeline a few days ago.  I have contributed what I could.  If you are able to add a few dollars, it would be a blessing to them and to you.