I haven’t mentioned that everywhere we stop to spend the night, we’ve been leaving RVIC (RV Inspection Connection) brochures.  This morning I left a couple in the office where we were staying and the owner of the campground said she has a son that is working at Home Depot that she needs to be able to get back working in the campground.  She said maybe he could learn to do RV inspections, so I went back to our RV and got a brochure for her to show him on how to become an RV inspector.  I hope he does get the training.  Steve and Coop need more inspectors.

It’s been wet, miserable weather all day, but fortunately, we only had a couple hour drive.  It was especially fortunate since the roads were mostly narrow again.  Mark finds that stressful.  There were a couple times when we were crossing a narrow bridge or something and a semi was coming toward us in the other lane.  Those were the times when Mark let out with an unholy word.

So without further ado, here are today’s pictures: 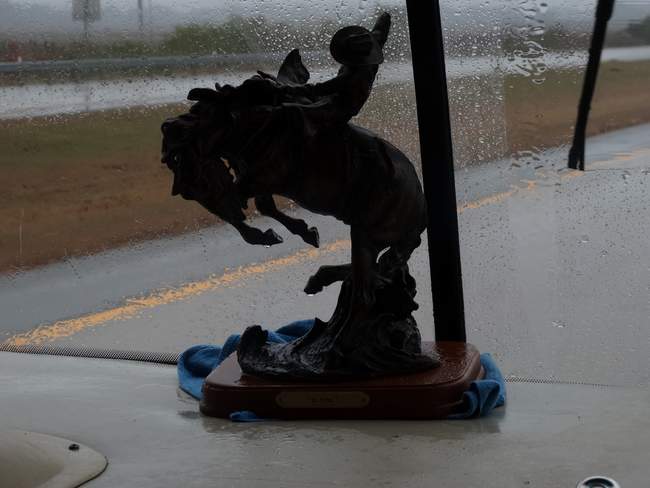 As we were driving along this morning, I suddenly realized that our dashboard was wet. Then I noticed that Mark’s horse statue was dripping. I pulled the statue away from the windshield and discovered that water was bubbling up from the base of the windshield. It’s never done that before. I put a towel there to slow it down a bit. When we stopped, Mark discovered that the molding outside is coming up in that area. Not quite sure what to do about that yet.

Mark pointed out to me a field of knee-high plants with white on them and these round white bales. It’s cotton! I always thought cotton was a shoulder-high plant, but now I see how backbreaking it would be to pick! 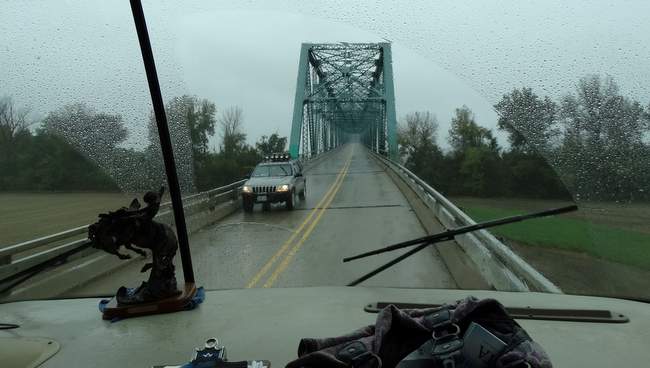 This bridge crossed over the Mississippi River. 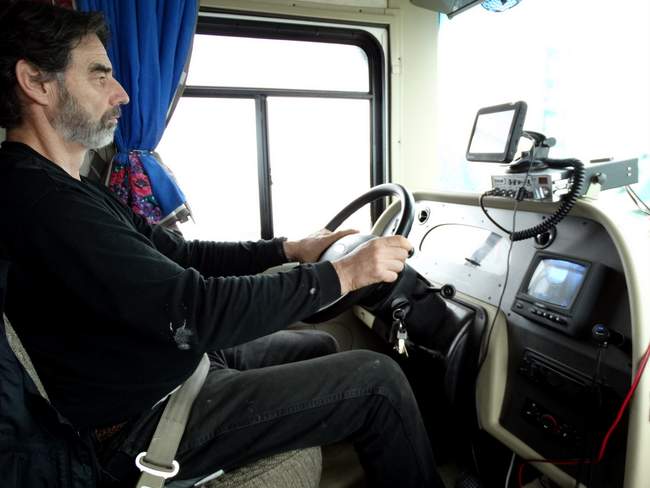 Mark was kind of tense on the narrow bridges. 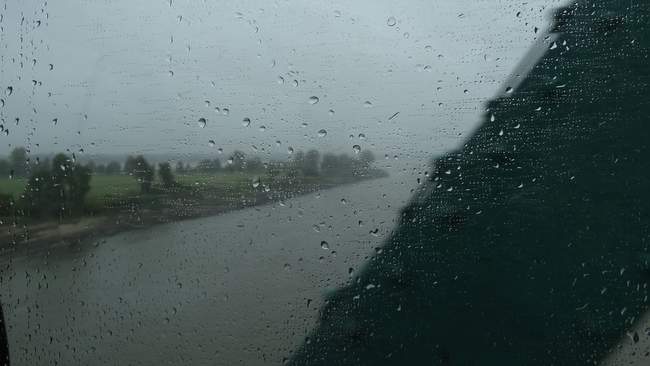 I don’t know if you can see at the tip of this piece of land that it is the confluence of two rivers. 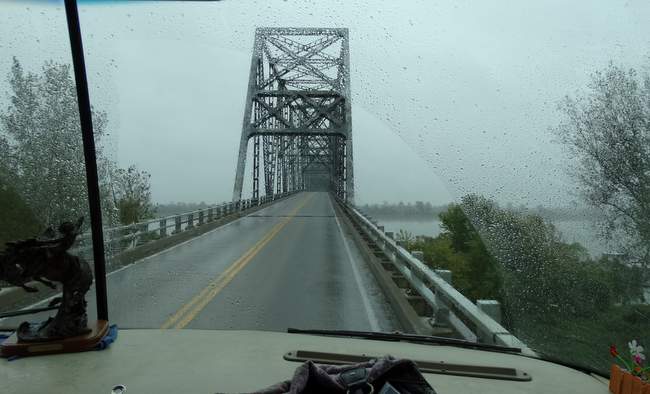 This bridge crossed over the Ohio river on the other side of that strip of land. 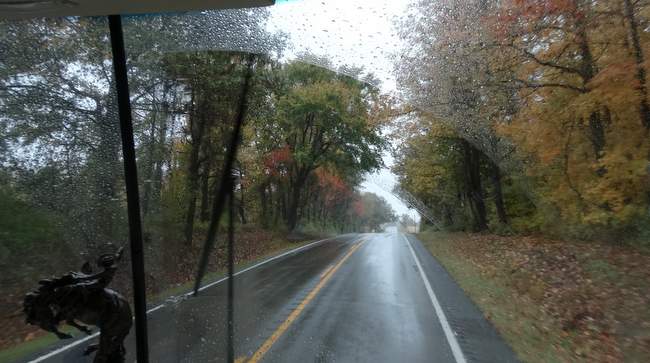 This stretch of road was pretty even if it was narrow and wet.

Today’s stop is one of the stops I’ve been looking forward to on this trip.  Paducah, Kentucky is where the National Quilt Museum is.  I took my camera in and they informed me that I could only take pictures in the lobby, not inside the museum.  And I was not to touch any of the quilts.  Oh, how I wanted to photograph and touch!  I managed to discipline myself with all the willpower I had. 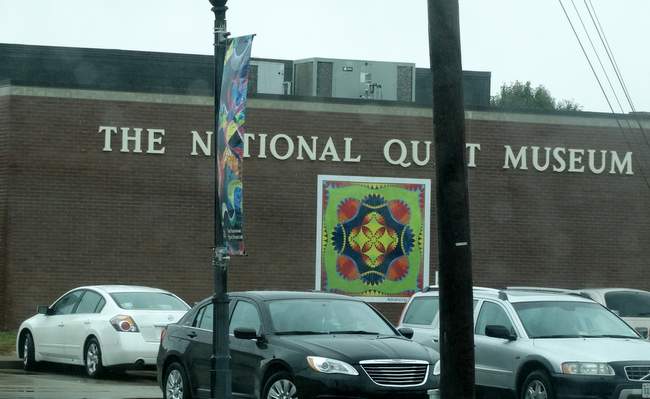 As we drove up from the back side of the museum 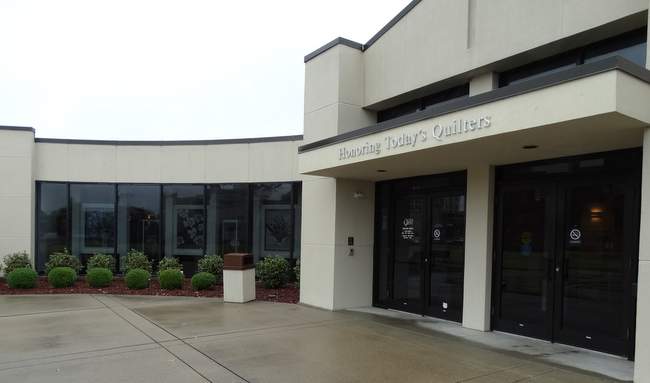 The front entrance to the museum 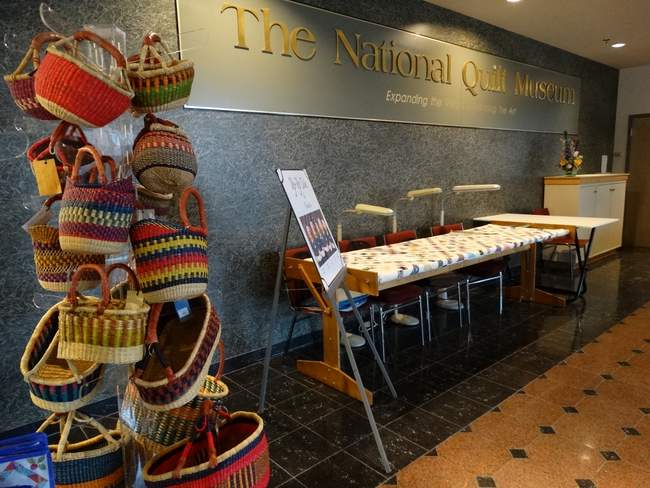 Inside the lobby. I took this one for you, Katherine Plahmer! The baskets reminded me of you. The quilt on the frame is a work in progress. 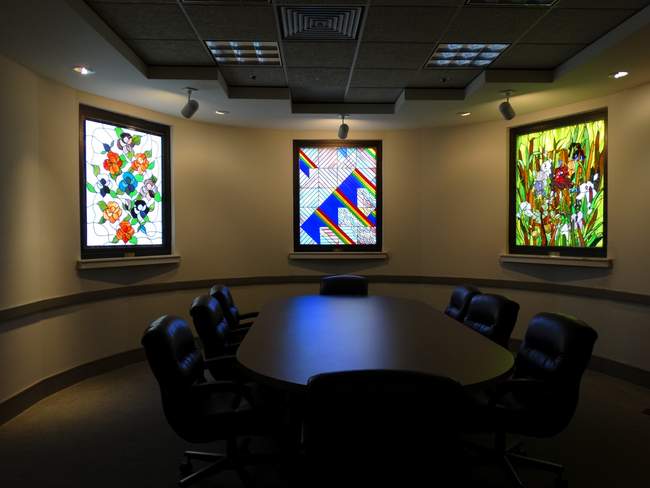 This is a conference room just off the lobby. I had actually taken a picture in this room of a wooden quilt that looked so much like fabric Mark and I couldn’t believe it wasn’t. Then I noticed the “Do not photograph” sign, and like a good girl, I deleted the photo. *SIGH* 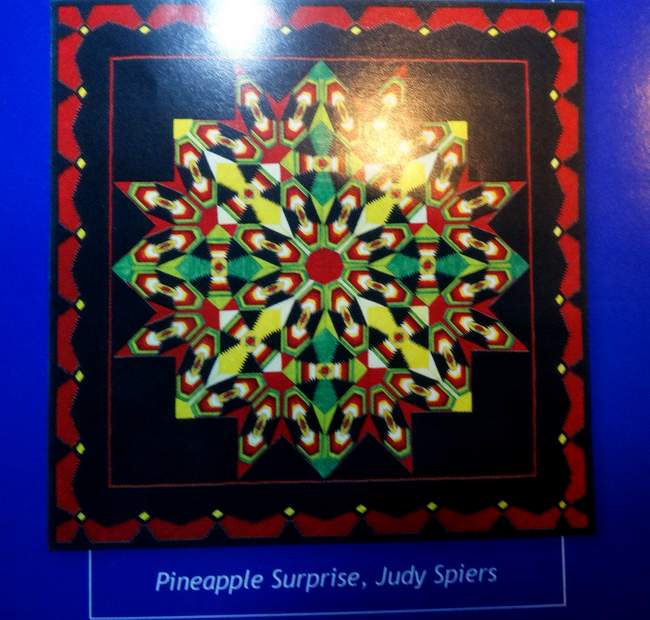 I couldn’t take pictures in the museum, but this picture was in their brochure so I photographed it. This was an amazing quilt. It was only about 18 inches square, but it had something like 6,000 pieces in it.  The brochure photo doesn’t do it justice. This is one I would have liked to touch! 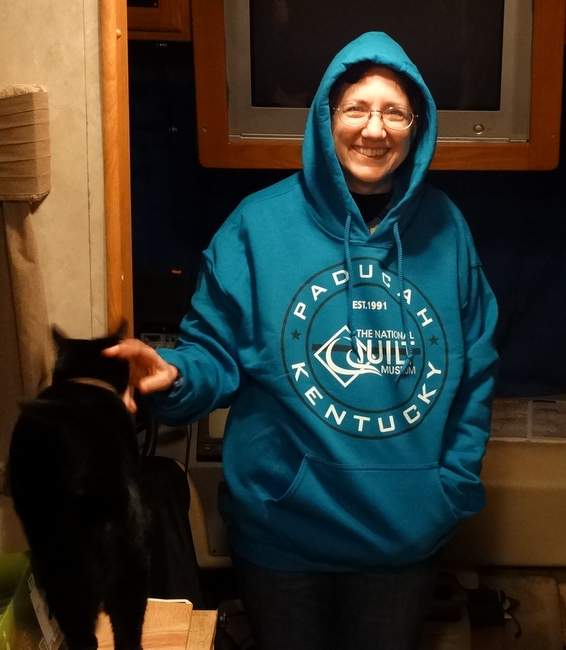 When we finished in the museum, we visited the gift shop. Mark said I had to have a sweatshirt from there to wear while I’m quilting and he bought this for me. I modeled it when we got home.

I’ve also been hearing about Hancock’s of Paducah, but it was a bit of a letdown.  It’s supposed to be huge.  I’ve been in bigger fabric stores in the Portland, Oregon area.

When Mark and I first pulled up we both said it didn’t look very big, but I was hoping it would look bigger from the inside. 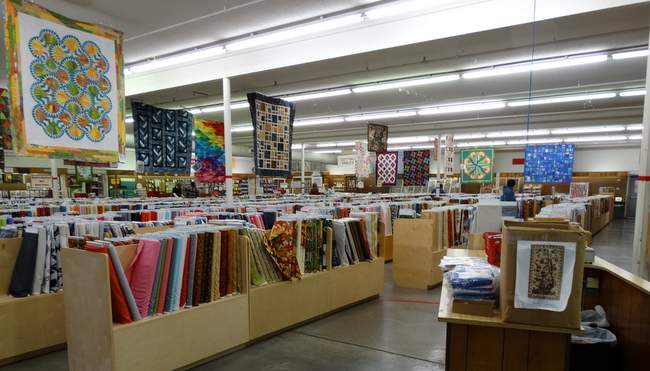 This is the inside. You can see the back wall, so it’s not all that big. I liked all the hanging quilts, though. Especially since I was allowed to photograph them!

I had been looking forward to stopping in at this fabric store because there were a few things I needed for the quilted wall hanging I’m currently working on.  (More about this in a later post.)  I was a little disappointed that they didn’t have their fabrics set up as well as I have seen in other fabric stores, and I had a really difficult time finding what I envisioned in my head.  I ended up settling for something that will do, but it’s not perfect.

2 thoughts on “From Paducah, KY”