We arrived in Maple Grove, Minnesota where our KOA is and checked in on April 9th. We paid for our site and for a cabin a short distance from our site, got the key and a space heater for the cabin, turned the space heater and porch light on, and locked the door. The cabin is for my son, Jamey, who was just finishing up a work conference at the University of Minnesota. He had spent the two nights of his conference in a hotel, so he called us when it was over and we went to pick him up.

On our way into downtown Minneapolis it began snowing. Had it not been for wanting to see my son, we would have stayed down south a little longer. However, when we pulled up in front of the hotel and he walked out with a big grin, it was all worth it! We found a place to have dinner and spent the evening visiting. I showed him our pictures of the Johnson Space Center in Houston and gave him the T-shirts we got for Jamey and Sarah there. 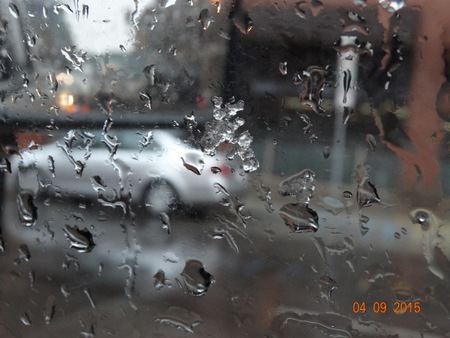 Snow on my window 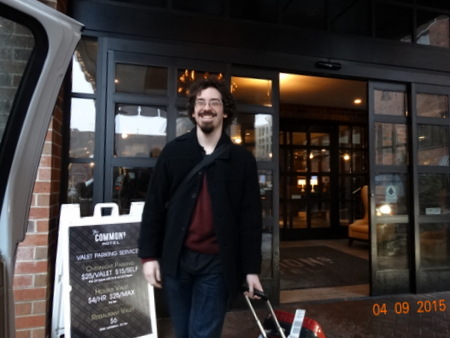 The next morning we woke up and it was snowing again; huge flakes that began covering the ground. Fortunately, by the time we finished breakfast the snow had stopped and the ground snow was nearly melted.

Jamey wanted to go to the office of the colleagues he’d been in the conference with, Rockwell Collins, so we took him there. What a fun group! Geeks are like nobody else. They don’t take themselves too seriously and often their offices have toys in them. This office was no exception. They had a Frisbee golf room and their conference room – with a large conference table – had ping pong paddles and balls! Jamey showed us a quadcopter exactly like the one in this 60 Minutes video. After a brief tour of the office, we all went out to lunch at an Indian restaurant where Jamey’s colleagues plied us with questions about our lifestyle. 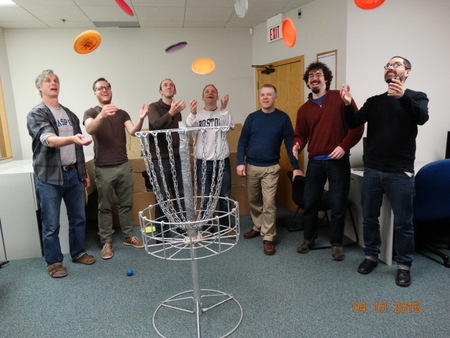 A gaggle of geeks and their Frisbees! 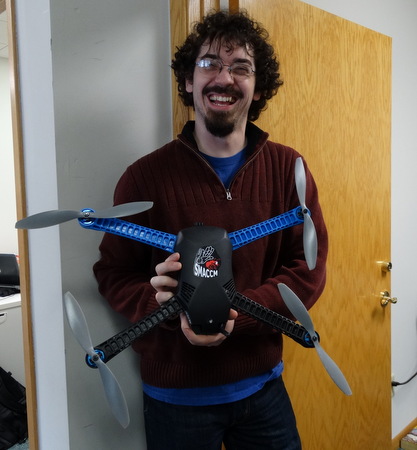 Jamey with the quadcopter

When lunch was over they all went back to the office and Jamey and Mark and I went to the historic Mill District of Minneapolis to see the Mill Museum. Minneapolis grew up around the waterfall in the Mississippi River that provided power for the mills. The museum is built in the remains of a flour mill that has had quite a tragic history. It was built first in the 1800’s when they didn’t know there were any safety issues with flour. Flour dust hung in the air, sometimes so thick one could barely see their own hands. The workers breathed in that dust and got an illness called white lung. The workers smoked in the mill and sometimes sparks flew off the metal parts of the machinery. During one night shift the mill suddenly exploded in such a powerful explosion that it also damaged several surrounding mills. Needless to say, the workers on that shift were instantly killed and four people in the surrounding area were also killed.

The company owners learned from that experience and when they built a new mill within a year, they installed equipment that would eliminate the flour dust. Workers kept the floors swept and cleaned and there was no smoking in the building. All went well until more modern technology made this mill obsolete. They closed the mill and it remained standing with all the equipment intact for nearly thirty years. It was being used by squatters and the homeless who no doubt built small fires to keep warm. One night the building caught fire. Fortunately no one was killed, but the fire left only the outer hull of the building. Steel girders were twisted in the heat of the fire. The equipment burned up completely. 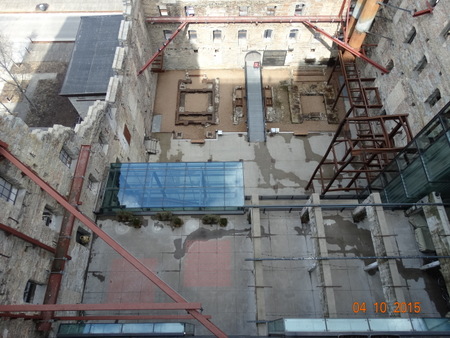 Looking down into the destroyed mill 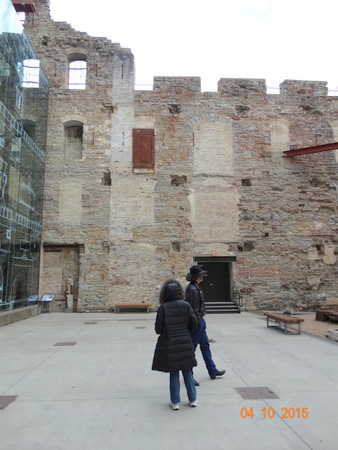 Looking up from ground level 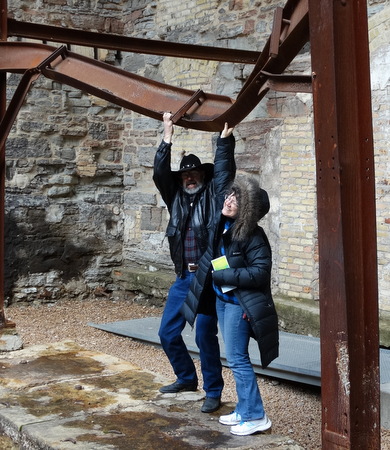 Trying to bend one of the steel beams!

The city was going to demolish the remains, but the historical society asked to make a museum of it. They also got the cleaning building which was next door. This was the building where the wheat was cleaned before it was sent next door to be ground into flour. With a small gap between the walls, the cleaning part of the mill remained unharmed and its machinery intact. There was a large elevator in the standing building that they put bleachers in and a short program was given where the elevator went between floors and told the story of the mill in the words of workers who had worked there. We ended up on the top floor where there was an observation deck that you could look down into the ruins from. 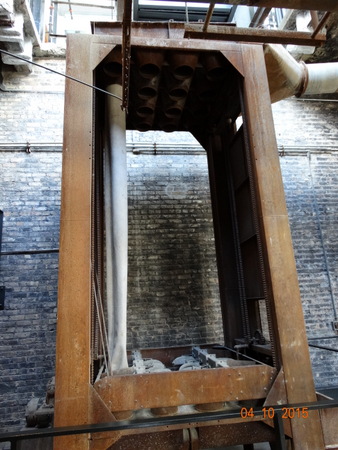 The “sock” machine that helped keep flour dust down 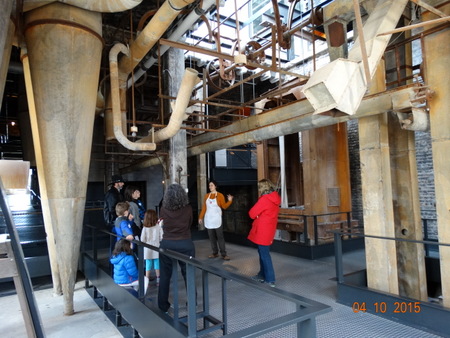 The funnels on the left also helped keep flour dust down. The woman in the apron was our tour guide.

When we finished looking around in the museum, we headed across the street where there is a stone bridge used mostly by pedestrians and bicyclers to cross the Mississippi River. There is an island in the middle of the river at that point with a power station on it. We walked across the bridge and discovered we could take a two mile loop back to where we started, so since the weather had finally cleared up and gotten warm we walked the rest of the way around the loop. 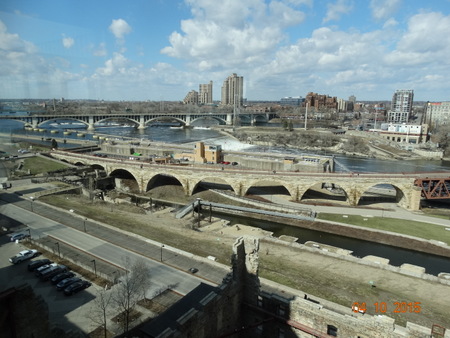 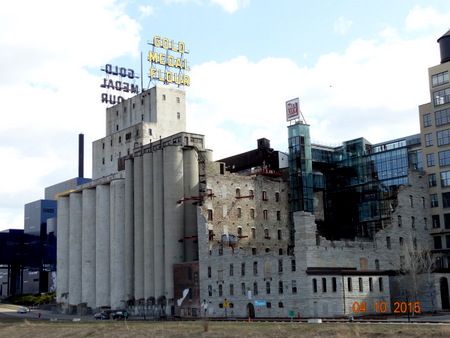 A look back at the museum from the stone bridge 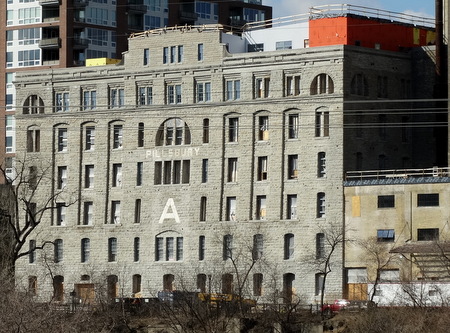 The Pillsbury A Building 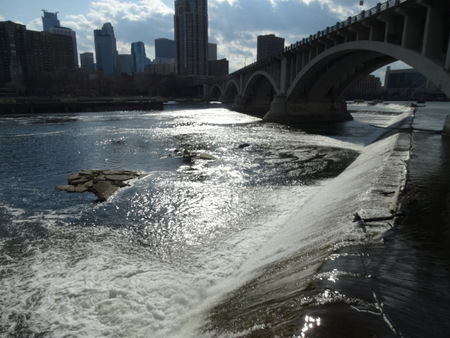 The waterfall that had to be reinforced for industry’s sake 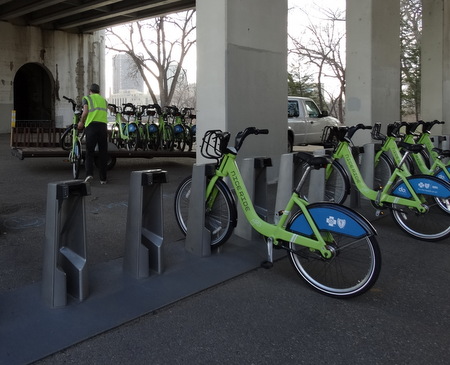 It was so fun to be there with Jamey. I used to call him my fuzzy little monkey because he was always climbing things, and now he’s my fuzzy big monkey! He is a total ham and we laugh a lot together. 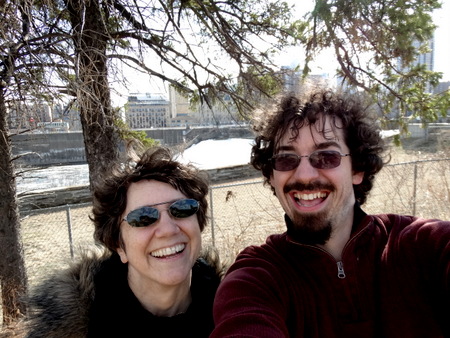 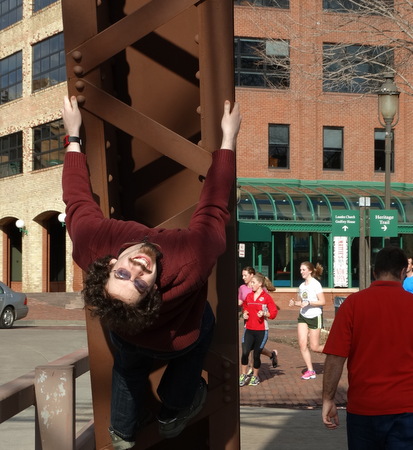 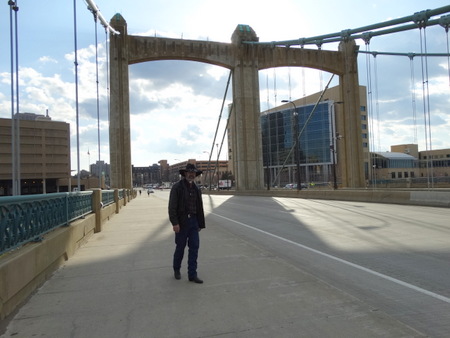 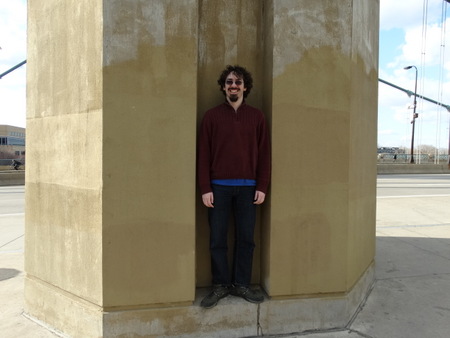 An inset in the bridge just the right size for Jamey! 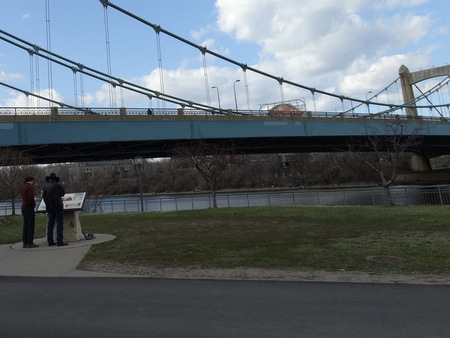 Checking out a sign on the museum side of the bridge again. 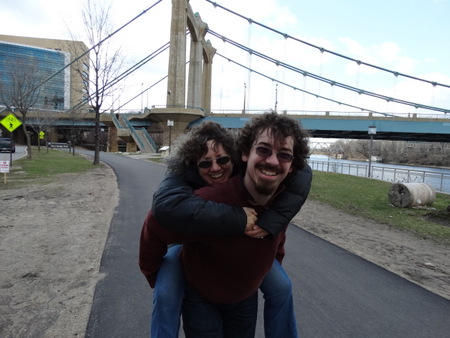 He may be my baby, but he can carry me now! 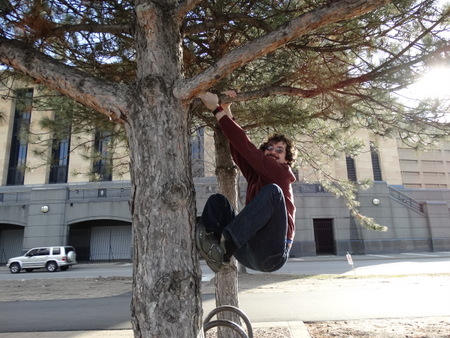 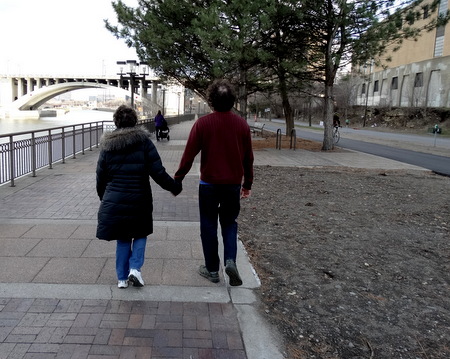 After our walk, we ate dinner at a Thai restaurant next to where we were parked and had a delicious meal. We came back home and Jamey and I got started talking about our thoughts and observations about current events and technology. We ended up staying up till 1:15, although Mark had the good sense to go to bed considerably earlier than that.

1 thought on “From Minneapolis, MN”