This morning we caught Steve, the representative from Express Employment Professionals, and had a long talk with him.  We told him what happened yesterday and the problems we were having and asked him if we could work in the lab.  He said they just hired two young guys yesterday to work in the lab and we asked if they might be willing to trade.  He said he’d check on it, and if not he wondered if we’d be willing to switch to another piler yard that would be no more than twelve hours.  We were hesitant.

When he left we went to the post office to pick up our mail and the Laundromat to do laundry ($4.75 just for each washing machine!), and then we were hungry so we went to Pizza Hut for lunch.  Who happened to walk in for a take out order but Steve?  We invited him to sit at our table till his order was done and asked him what the word was.  He said that the lab job was a no go.  We asked about the other job and he said he hadn’t asked because we didn’t sound interested.  We said we were willing to try it again and see if we could do better this time, so he said he’d ask Don, the boss.

After lunch we went to get some things we wished we’d had in Savage when we were working there, like safety goggles to keep the dirt out of our eyes.  We stocked up on some more groceries and then we went home.  Steve called and said we could have the other field job and we need to start tomorrow morning so we had to move immediately.  He said he’d already made arrangements for a place for us to stay where we’d have our own site with water and sewer and a mail box!  It’s a bit dumpy, and it backs up to I-94, but it’s much closer to where we’ll be working than our other site was.

We hurriedly packed everything up, and with one small glitch, we were on the road by about 5:00pm.  As we drove by the Savage site, I took a picture of the sugar beet pile Mark built.  Even though it’s a bit blurry because we were speeding by, you can see how many pipes they laid while he worked on it. 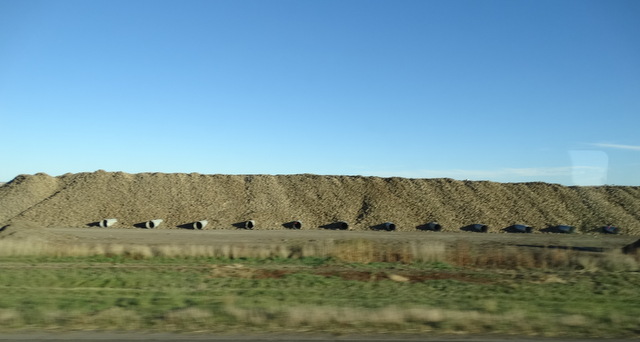 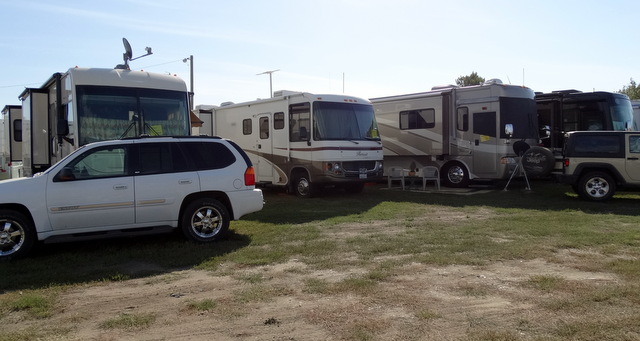 Our site, minus our car, at the fairgrounds 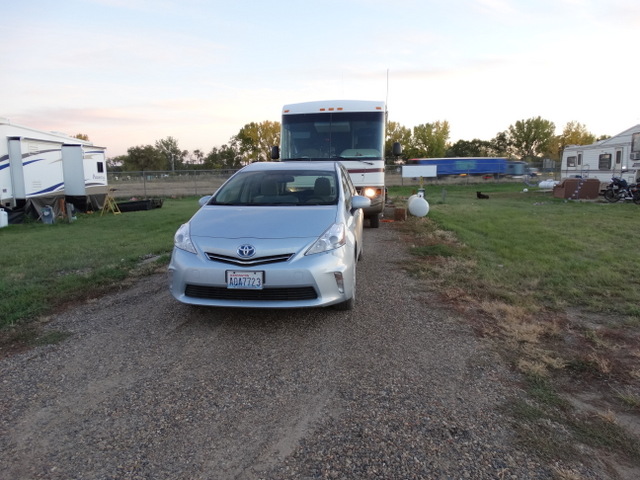 Much roomier site of our own! The blue truck in the background is on I-94.