Skip to primary content
Mark had all the fun today, so I asked him to blog about it.  It was Guy’s Day Out/Male Bonding Time for Mark and Jerry and the Jernigan’s friend, Lance.  Here’s Mark’s tale in his own words:

I’m sure you’ve all heard some fisherman telling his fishing tale about how big a fish he caught and how it jumped off the hook and got away…  Not today!!!  However, I do recall Fred Meyers announcing a special on “Copper River Salmon” in the meat department while they last…  Have ya got an idea where I’m going???  Well up here in Alaska they call them “Copper River Reds” because of the ruby red meat of the fish.  And we didn’t go out on a fishing charter to catch them.  We used a fishing wheel.

I was asked if I’d like to go fishing with the boss’s father, Jerry, and a family friend, Lance.  We all met at Jerry’s house at 8:30am, and headed for the Copper River and the fishing wheel that Jerry is allowed to use.
What is a fishing wheel, you ask??  Well, if you could picture in you mind a water wheel being used to power a mill and provide drinking water in ancient times, then you have an idea of what a fishing wheel is.  In this case, instead of providing power or drinking water, it catches fish out of the water.
We arrived at Slana at the foot of the Mentasta Mountains along the Copper River.  We unloaded the Polaris six-wheel-on-demand All Terrain Vehicle (ATV) with a winch, a seat for two, and as many cup holders.  I’d never ridden the afore-mentioned six wheeled vehicle which I’ll just refer to as the Polaris before, but was amazed at what if could do.  There were times I was certain the Polaris was going to roll over or throw me off the back seat, just to find my fears unwarranted and the Polaris happily rolling down the trail that had been cut through the woods.
When we arrived at the camp, I got my first look at a fish wheel.

In Alaska because of the extreme weather about eight months out of the year, residents who live up here in this part of God’s country need to stock up for food, most of which comes from fish and game that is abundant in this state.  Lance had the rubber boots, so he walked out on the wheel’s planking and looked in the box.  It was full!!!!!  It was time for the fun and the work to begin, which is why there aren’t a whole lot more pictures.  First thing to do is stop the wheel which required placing a plank under the wheel to stop it.  Kind of like shoving a stick into the spokes of a bike wheel.  It stopped cold!!  That and the force of the flowing Copper River almost knocked Lance into the water…

Lance, balanced on his plank next to the box, started filling a five gallon bucket which he passed to me where I was balanced on the opposite plank.  I then passed the bucket to Jerry who in turn dumped the fish in the cooler.  Now each salmon was long enough that it extended past the handle of each bucket full of ten salmon.  Each cooler ended up with fifty salmon, with twentyseven more carried home in a big garbage bag.  Oh, did I mention that Lance gave away another ten salmon to a friend??   Once back at the truck and trailer, it took Jerry and I both to muscle the coolers from the ground to the bed of the trailer. 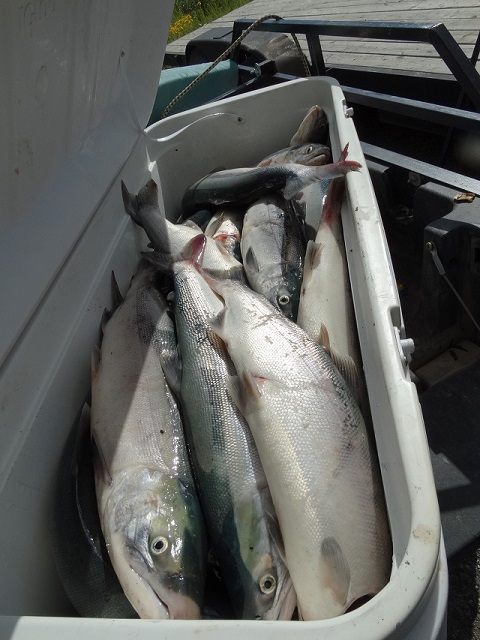 Getting the coolers out of the Polaris wasn’t so hard, as we kind of controlled the coolers quick descent to the ground.

After a short stop to look at some old rusting cars in the woods, we returned to Jerry’s place where Rose had lunch waiting for us.  After lunch we set to packing the fish; some were wrapped whole for the freezer while others were fileted for our small RV freezers.

Thus endeth this day of guy merriment and adventure……