It’s been a pleasant trip, but after the frustration of not being able to do everything I wanted with my blog the last couple days, it’s nice to be back on American soil!  For starters let me just say that we are now on Alaska Time, so we are an hour ahead of Pacific Time.

Yesterday morning I took Mark back to the Beringia Interpretive Center and he found it more interesting than he had thought he would.  He had fun hamming it up with the displays!

From there we went shopping and then to lunch.  In the afternoon we went to the MacBride Museum of Yukon History.  There I figured out that that animal we had seen running fast through the trees was a Yukon otter.  My favorite display was of Sam McGee’s cabin (as in The Cremation of Sam McGee by Robert Service).  Sam McGee was one of Service’s customers at the bank in Whitehorse, and Service liked Sam’s name so much, he asked if he could borrow it for a poem he was writing.  The real Sam McGee was from Ontario, not Tennessee, and he admitted he kind of liked the cold weather!

Mid-afternoon we went back to our RV and grabbed our swimsuits and towels.  The place we were parked (that had such lousy internet connection) was right next to the Takhini Hot Springs.  I had been looking forward to a good hot soak our whole trip.  The waters were also supposed to have healing minerals in them.  We soaked until I felt like a puddle of melted butter and then we had dinner in the affiliated restaurant.  It would have been a great day if I hadn’t lost the blog I wrote last night.  Harumph!

This morning we got up and left the Whitehorse area at 9:30.  The sky was heavily overcast.  Today was one of our longer stretches of road since we had stayed in Whitehorse for two nights, and we got snowed on.  For the last number of miles before we got to the border, the roads were really bad with frost heave.  Mark described it as looking like the edge of a lasagna noodle.  By the looks of it, Canada hasn’t been able to fix that stretch of the road yet because of the weather.

It was amazing but the roads improved immediately as soon as we crossed over into Alaska.  The weather did too.  By the time we got to Tok RV Village, the clouds had lifted some, although it was still quite cold out.  We went into the office and a woman greeted us and asked if we had a reservation.  We told her we are Workampers here to work for the summer and she introduced herself – WK – and her husband – Mike – to us.  We hadn’t heard that there were going to be any other workers besides the owners and us, so it was nice to meet them.  WK also said that there’s another Workamper from Florida.  WK and Mike are from Virginia.  The owners haven’t arrived yet, but they are expected Wednesday or Thursday of this week.  In the meantime their son, another Mike, is in charge.  He wasn’t around when we first arrived, so WK and her husband told us we could use the carwash here to clean up our RV and car, which desperately needed it.  Then the “in-charge” Mike came and showed us where we could park.  We are right next door to the other Workampers.  Not many other vehicles are here yet.

We went out to dinner at the only recommended restaurant in town, Fast Eddy’s, and then we went grocery shopping.  The rest of the evening has been taken with getting our home set up again.  We start our new job at 10:00 in the morning tomorrow, and we are both excited about getting back to work again.  We’ve gotten too soft the last four and a half months!

Here, finally, are pictures from yesterday and today: 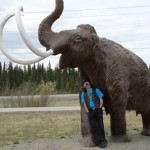 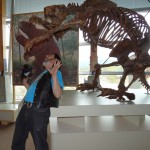 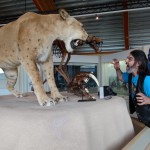 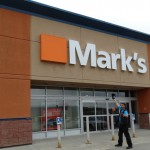 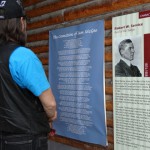 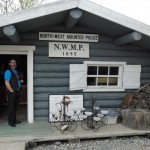 Mark paying his respects to the NW Mounted Police 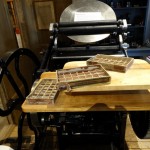 This one’s for Dad 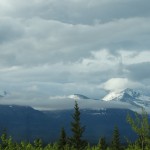 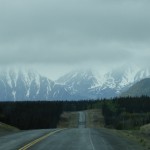 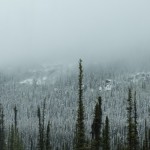 There’s snow in them thar hills! 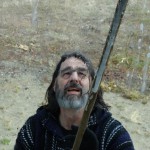 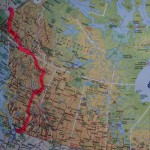 The full extent of our trip