Mark and I have been working on something for the last week that I’ve been keeping hush-hush about until it came to fruition.  Today we signed the papers for a 2005 Georgie Boy Pursuit RV!

This solves several problems.  The first problem was that when we tried to get Washington license plates for our 1999 Fleetwood Pace Arrow, we found out it was going to cost nearly $2000 because we bought it in Oregon and didn’t pay sales tax on it.  If we’d bought it in a state that had sales tax, we would have been OK.  Since the tags on our license plate were due to expire at the end of this month, this was the best way we could think of to get a Washington license plate that would be covered by our loan.

Things in our 1999 Fleetwood Pace Arrow were starting to fail.  Also, we’ve noticed a lot of Workamping jobs that say they won’t hire someone with a rig that’s older than ten years.  Our RV was just too old and worn out.

Another good reason is that we were able to work in paying off my sister and her husband for their loan for the old RV.  We have good relations with my sister and brother-in-law, but it’s never a good thing to overstay ones welcome with family!

The only real drawback to our new RV is that there isn’t nearly as much cupboard and drawer space as there was in the old RV.  Mark and I spent all afternoon and evening moving stuff from our old RV to our new one, but we’ve already maxed out our storage space and there’s still a lot of stuff in boxes and bags.  That’s just the stuff inside the RV.  We’re spending the night tonight in the dealer’s parking lot and tomorrow morning Mark has to get all the stuff out of the basement compartments and moved over.  We’re exhausted but we have to get our bed cleared off before we can get into it.

Here’s a picture Mark took of me in front of our new home: 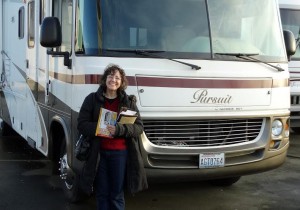 Happy camper in front of the new RV