Monday morning and Mark and I hoped to begin our new adventures here in Arizona.  Mark is hoping to start a new branch of his business down here in the winters, and I was hoping to find out which H&R Block office wanted me today. 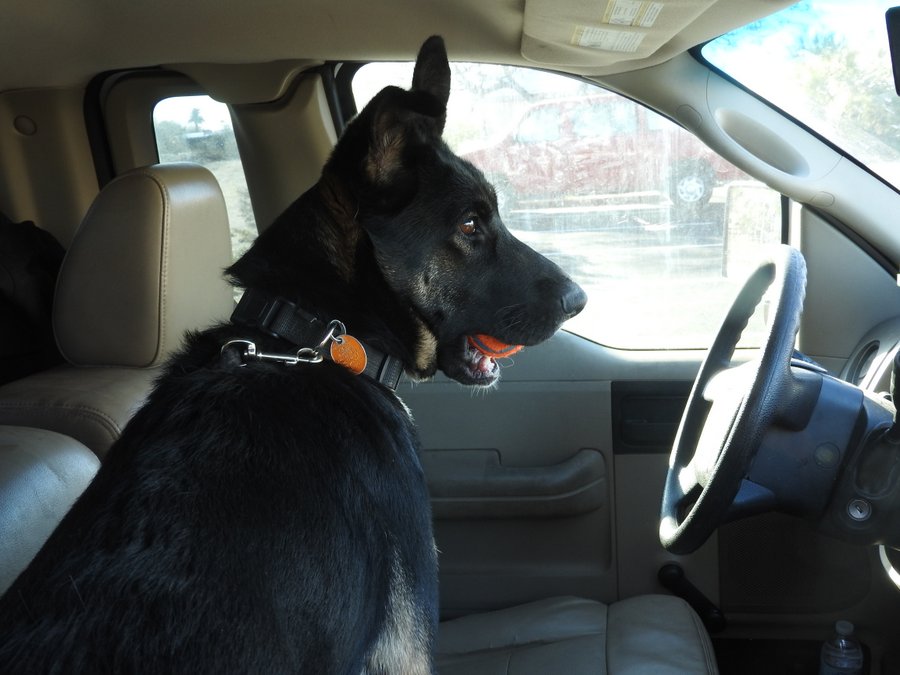 Mark tries to keep a lot of chew toys in the truck so that Tucson won’t eat through the seat belts as she did in Oregon.  > :-/ 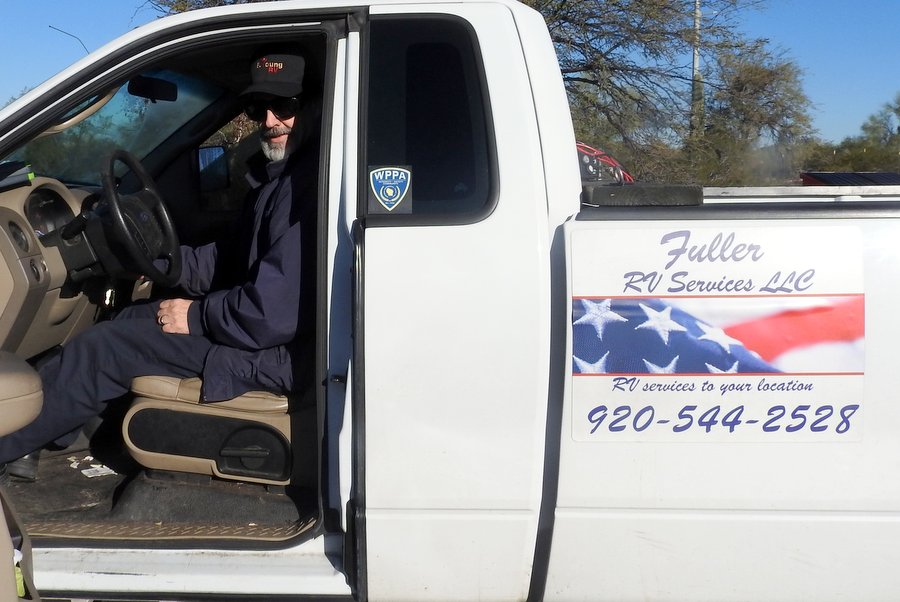 Mark is using our pickup truck for his business truck down here. 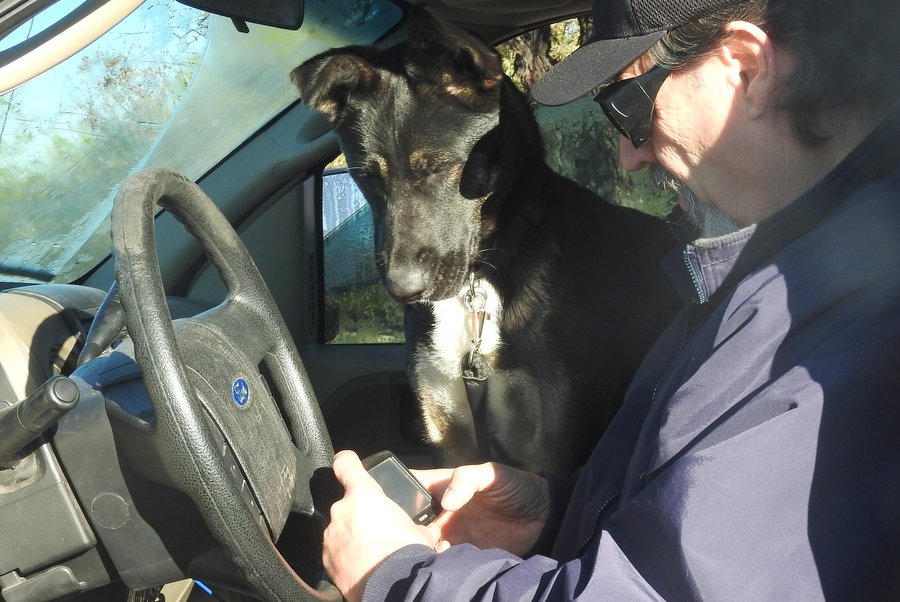 Mark and Tucson trying to figure out what route to take. 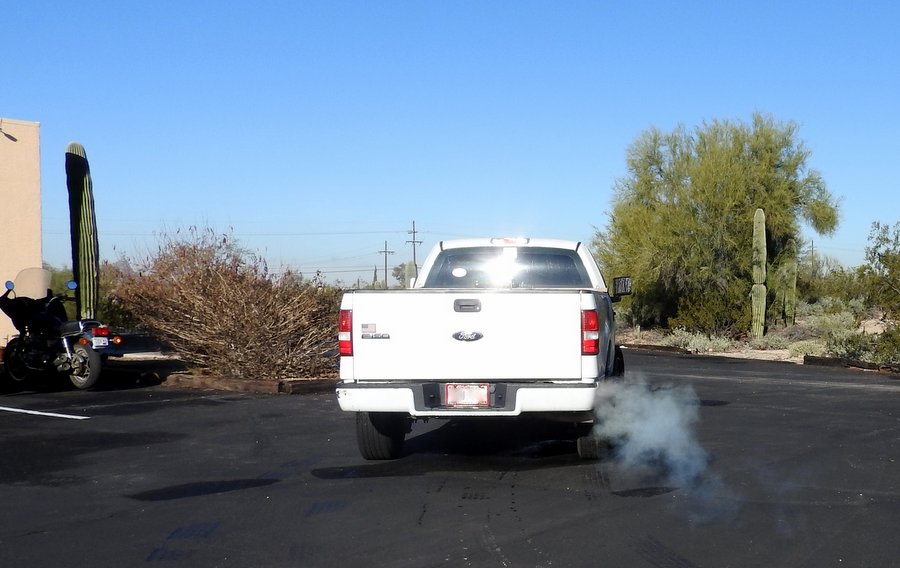 And off they go!

I had sent emails to two different H&R Block offices that I was told needed a Client Services Provider (CSP – a fancy way of saying Receptionist).  I had given them my phone number here and asked them to call, so I stayed home to wait for a phone call.

Mark headed to the south end of Tucson to the RV resort we had stayed at last year.  He told me later that when he got there, he walked in the office and said, “I’m back!”  The woman at the desk didn’t know what he was talking about, but last year’s manager happened to be in the office and remembered Mark.  Mark pointed to the brochure the park hands out with a map of the park.  Around the edges of the brochure are ads for things the RVers might want access to, and last year, Mark paid for advertising in this year’s brochure.  He left some business cards in the office and then went to a tractor farm store down there and dropped off some of his business cards in case anyone goes in and asks if they know a good RV repair person.  When he finished there, he called home to see if I’d heard anything yet.  When I told him I hadn’t, he suggested I look up the phone numbers for the two offices I was waiting on.

The two offices I was waiting to hear from are relatively near here.  One is three and a half miles away and one is eight miles away.  I decided to call the manager of the one that’s only three and a half miles away first.  She wasn’t at that office today but they gave me the phone number for the one she was at.  When I told her who I am, she asked me if I’d be interested in working from 9:00-5:00 Monday through Friday and I said an enthusiastic “Yes!”  Then she asked if I’d like to come to the office she was in so that she could train me.  Again I said “Yes!”

Mark was here between stops and it was nearly noon, so he took me to get some lunch and then dropped me off at the training office.  In years past, when I’ve done this, I have had to use a cubicle up front where people were talking around me and I couldn’t hear the training video very well.  This office had an actual training room that was spacious and fairly quiet.  My boss took me quickly through the instructor-led part of the training and had me watch a video and take a test.  I passed the test with flying colors!  Then she had me go out front and get hands on training from the CSP for that office.  The CSP there is very friendly and knowledgeable and a good teacher.  Some of the stuff was a refresher of what I’ve done in previous years, but H&R Block changes a few things every year to try to improve the experience for the CSP, so she taught me some new things as well.  When I finished up there, I called Mark to come and get me and while I was waiting for him, I visited some more with the CSP there.

When Mark picked me up, I asked him how things went while he was out.  The other campground his business is advertised at is at the Davis-Monthan Air Force Base which is a bit closer to where we live.  As retired military, he has an easier time getting in there than some repair people would have.  He said he went in and pointed to his ad in their brochure and gave them some of his business cards.  He also noticed that they have travel trailers for rent and reminded them that he can repair those too if they come back damaged.  Mark drove around the Fam-Camp on the base and said that there were some top-of-the-line RVs parked there, RVs that could cost up to $200,000.  He thought those might belong to retired generals or something.

After Mark finished at the Davis-Monthan Air Force Base, he stopped in at a huge Ace Hardware store that I had discovered for him last year.  He wandered around inside for a while and then gave them some of his business cards.  It was at that point that I called, so he came to pick me up.

When Mark came to get me, he still had one more store for the day that he wanted to stop at.  We went to Camping World so that he could see if he can get a business account there.  He’s going to need to be able to get parts for his customers.  They gave him the paperwork to take home.  While I was waiting, I looked around the store and found some things we’ve been needing for our RV.  As soon as he met up with me, I showed him the things I had found and we bought a few of the less expensive items.  We got things like a bag holder for grocery bags which we save for our waste basket and for dumping the kitty litter when we clean the cat box.  We also got a new porch light since ours has burned out, carpeting to replace the worn carpeting on one of our door steps, and a 2019 road atlas.  The one we’ve been using is from 2016.  I assume a few things have changed in the last few years!

Then we stopped at my new office and I met a couple of the tax pros there.  I told them I am their new weekday CSP.  They hadn’t heard that they were getting one, so it was a pleasant surprise.  They seemed nice.  I am so relieved to finally know where I belong!  The office is close enough that I’m hoping to see if I can ride my bike there and back.  At least I should get in shape this year!