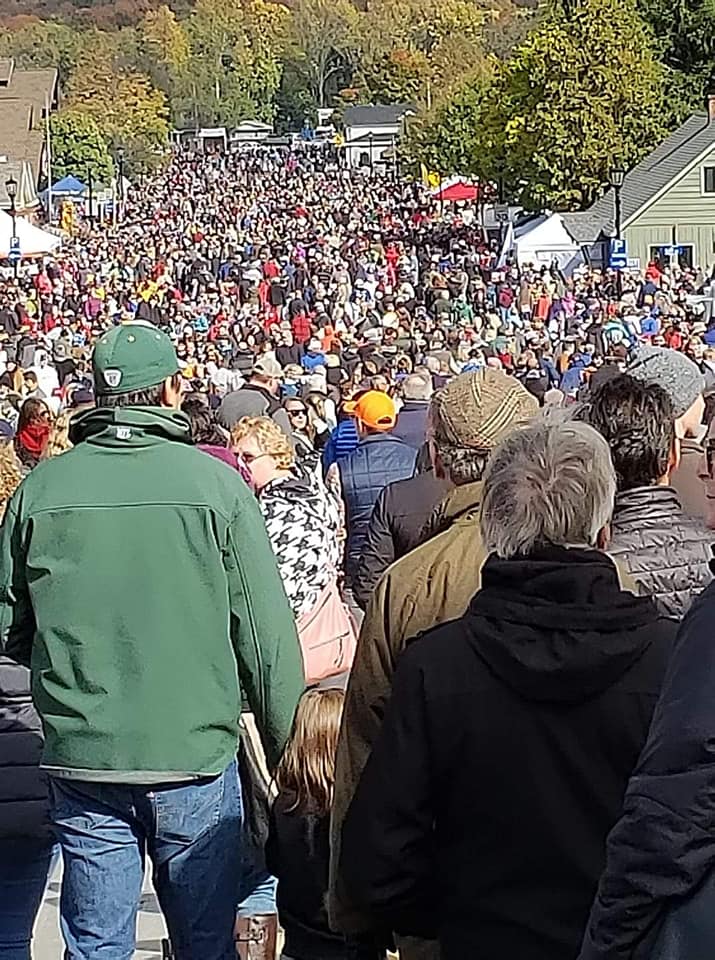 The above picture was something Mark found on Facebook.  I don’t know who the photographer was, but it shows what Sister Bay looked like on Saturday during their annual Fall Fest celebration.  That’s the last major event of the tourist season here.  Everyone said this was the biggest Fall Fest on record.  Mark and I avoided Sister Bay all day as much as possible.  On Sunday, after it was over, most of the tourists left.  Ahhh!

Monday I was working at the Visitor Center.  It was a freezing cold day.  I had the space heater turned up full blast and I still left my coat on for the better part of the day.  At one point in the morning, I looked out the window and there was a snow flurry.  SNOW?!  In October?  Well, it only lasted a few minutes and it didn’t stick, but apparently there were snow flurries all over Door County because Mark experienced it at a campground further south around the same time of day.

My boss at the Noble House had asked if I could work this week if she got enough inquiries for tours, and I said yes, but yesterday she wrote and said there wasn’t enough interest to open the house.  That means I have the rest of this week off and only have next Monday left at the Visitor Center.

This morning, early, I drove over to Wagon Trail Campground.  This last weekend was the last time they were open and yesterday, the staff cleaned the place one last time.  Today they were pretty much all planning to leave.  I went to say goodbye to those who are my friends from back when Mark and I worked there.

The fall colors are becoming more muted and leaves are blowing around everywhere.  Yesterday and today, Mark had a bunch of winterizations to do.  Most of the winterizations have been spread out throughout October, but because campgrounds are beginning to close down, a number of his customers wanted him to close them up the last couple days.  From here on out, the winterizations should begin tapering off.

We have just over two weeks to get the house winterized and the RV packed and ready to go.  Another season is nearly over.