Shortly before we left Florida I got an email from Our Daily Bread Ministries saying they were going to be putting on a one day Bible Conference in Detroit, MI on April 30th and it was only going to cost $10 per person to cover a box lunch.  It was on our way, it was at the right time, and the price was right.  Who could pass up such an offer? 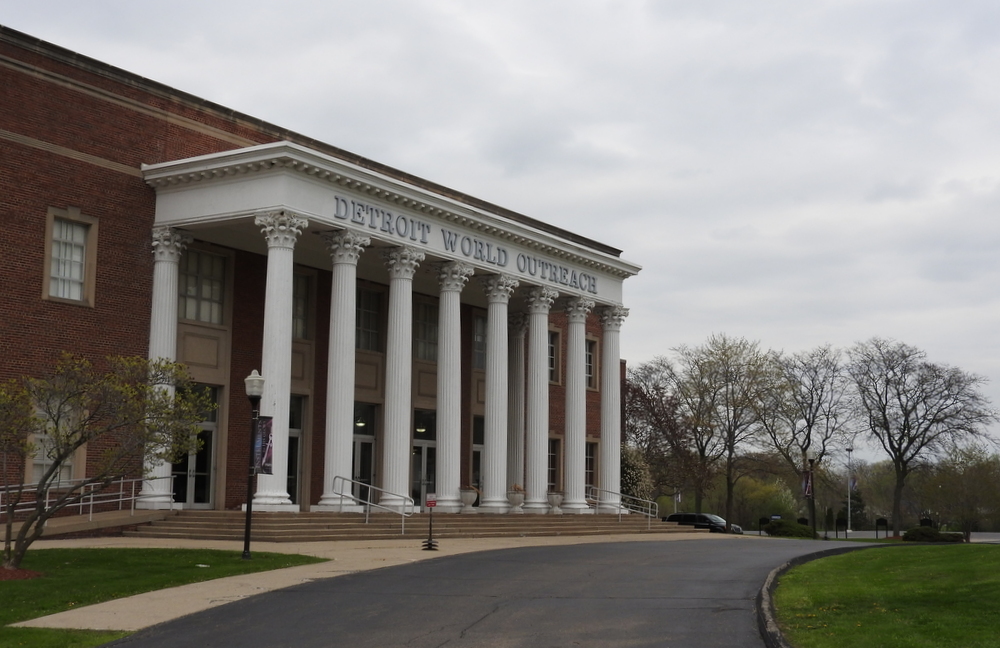 I hadn’t realized the conference was going to be so big until I saw the church it was meeting in. It was huge!

Our Daily Bread Ministries puts out a 90-day devotional four time a year.  The devotional contains a plan for reading through the Bible in a year and it includes writings by different authors to help explain one of the passages for the day.  I recognized at least one of the names on the program, Bill Crowder.  He’s a Bible teacher and one of the authors for Our Daily Bread. 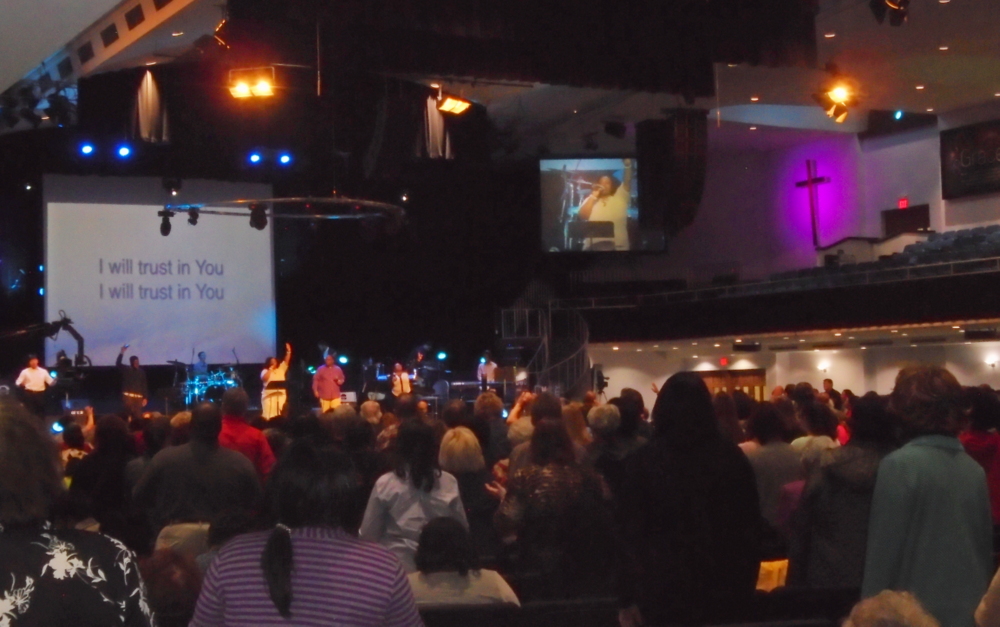 The day was broken up into four sessions and each session started with music and had two speakers.  (Check out odb1day on Facebook)

The first speaker was usually sort of an interview, like being on a talk show.  There was a host who asked them questions about themselves and branched into questions about their ministries or books they had written.  In session one, the person interviewed was Dr James Banks who has written several books on prayer, including the one I bought and had him autograph: Praying the Prayers of the Bible.  When he was signing my book I told him I am trying to discern whether I’m being called to chaplaincy, so he stopped and prayed for me.  I am looking forward to reading his book.

The second speaker of the session had time to deliver a talk, and in session one the speaker was Bill Crowder.  He used the passage from Matthew 5 where Jesus asked Peter to row Him out a little ways from shore so that He could preach to the crowds that had come to see Him.  Peter had been fishing all night with no success.  He was taking care of his nets for the next night’s fishing and then he planned to go home and sleep.  Out of all the boats on shore, Jesus asked to use Peter’s boat, in essence making Peter a captive audience.  Jesus acted as Rabbi to the people.

Then He turned to Peter and asked him to go out to the middle of the lake where the water was deepest and throw his net out.  Peter knew better.  You fish at night and you fish near the shore where you have the easiest time catching the fish.  He called Jesus “Master”, which in the Greek implies “Captain of the boat”, and said, “We’ve worked hard all night and haven’t caught anything.  But because You say so, I will let down the nets.”  Bill said that Peter was risking being the laughing stock of all the fishermen for taking fishing advice from a carpenter who was having him do it all wrong.  But when he threw out his nets in the deep, they became so full they were in danger of breaking.  He called for his partners in another boat and even between the two boats, the number of fish was so great the boats were in danger of sinking.  Bill likened this to the passage in Ephesians 3:20 which says that God “…is able to do immeasurably more than all we ask or imagine…”  I had never thought of it this story as being illustrative of how God can answer our prayers!

Finally, Peter fell to his knees and said, “Go away from me, Lord; I am a sinful man!”  In the space of an hour Jesus had gone from being Rabbi to Captain of the boat to Lord of Peter’s life.  And what did Jesus do with Peter’s request?  Rather than going away, He called Peter to follow Him and be a fisher of men.  Wow!  How could Peter have ever imagined he’d go from being an unsuccessful fisherman to being called to fish for men?  That’s a God thing!

Another of the speakers I enjoyed was Elisa Morgan who is a radio broadcast co-host on Discover the Word.  She also served for twenty years as the CEO of MOPS International (www.mops.org) which is an organization for Mothers of Pre-Schoolers.  She started out by talking about a day when a hanging hutch fell off her wall and all her grandmother’s china fell and broke.  She knew she couldn’t fix it, so she had to sweep it up and throw it in the garbage.  Some time later she was in a shop in Holland and she found a plate that looked like one of her grandmother’s dishes.  But when she turned it over it had a big crack with a couple staples in it.  She asked the shopkeeper about it and the shopkeeper said that was how they used to repair porcelain in the old days.  Elisa said, “Why wouldn’t they just throw it away?”  The shop keeper said that they either had to repair the plate or eat off a board, and they valued the plate.  It occurred to her that that’s what God does too.  She said He loves the broken and uses the broken to reach others who are broken.

What an affirmation for me!  As I say, lately I have been wondering if God might be calling me to chaplaincy, but I have a broken past.  Could it be that God brought me to this conference so that I could hear that He can do for me immeasurably more than I could ask or imagine, and that He can use my broken past?  We even sat at lunch today with a woman who has just become a minister under the tutelage of someone she respects and she said she came from a broken past too.  She took my contact information and gave me hers and said she’d pray for me.  I am asking God to open the doors He wants to open for me and close the doors He wants closed for me.  We shall see what happens.