Mark and I were in the men’s bathroom this afternoon cleaning when Kathy brought a couple in to look around.  Turns out they were the inspectors for the Good Sam Club.

For those of you who have never belonged to the Good Sam Club or gone camping at a Good Sam park, let me do some ‘splainin’.  There is a huge catalog about the size of a phone book where every Good Sam park (and many that aren’t Good Sam) is rated.  Every summer Good Sam sends inspectors to show up unannounced at every park and do an inspection.  Then they send a report to Good Sam about their ratings in various areas which go into the next year’s catalog, so it’s a big deal for those who want to attract campers in the future.

There are three rating categories listed in the catalog:

Restrooms and Showers – Rates the cleanliness and physical characteristics of toilets, walls, showers, sinks/counters/mirrors and floor.  If a park achieves a full point in each of the above, it receives a star that indicates exceptionally clean restrooms. Also rated are restrooms’ interior construction, odor, supplies, number of facilities, interior appearance, exterior appearance and location as it relates to park spaces.

Tim deserves a lot of the credit too.  He trained us, and every time we find something that needs repair he takes care of it.  Kathy also deserves credit because in between our checks and cleanings, she’s always going in to check.  One time she even had to clean up a major mess someone had made in one of the toilet stalls when they were sick.  There are also Bill and Barb, our counterparts who clean when we are off, and the women in the office who check the bathrooms when neither Kathy nor I are there to do it.  It’s a team effort.

Today is Tim’s and Kathy’s eight year anniversary.  I had been trying to think of something special I could do for their anniversary.  Hopefully a 10 star bathroom rating for the next year is special enough.  Happy anniversary, you guys! 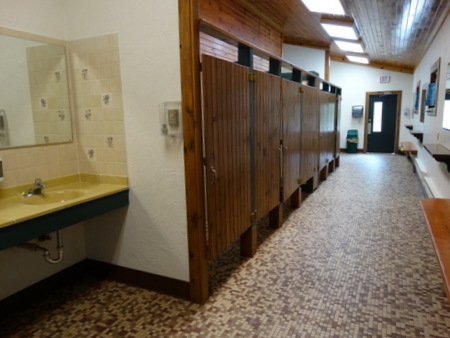 Inside the back womens’ bathroom