The first question that entered our minds when we came to Egg Harbor was, “How did it get that name?”  Today we took a trolley tour and found out.

On June 23, 1825, Mrs. Elizabeth Baird wrote an eye-witness account in her journal. She had been invited to join a boat that was going from Green Bay, WI (where she lived with her husband) to Mackinac Island where she came from.  It was one of several boats traveling with furs for the trading post in Mackinac Island.  Near nightfall they reached this bay and decided to make a race of which boat could reach shore first. The competition was heated and upon arriving at shore they found nests of duck eggs which they began throwing at each other.  A couple of the eggs even hit Mrs. Baird in the head.  The next morning the shore was so strewn with broken egg shells that they made a speech and named the spot Egg Harbor.

The trolley tour took us through Peninsula State Park in Fish Creek where Mark and I hope to take our bicycles someday.  There are vistas of some of the islands in the bay.  Here are some of the highlights: 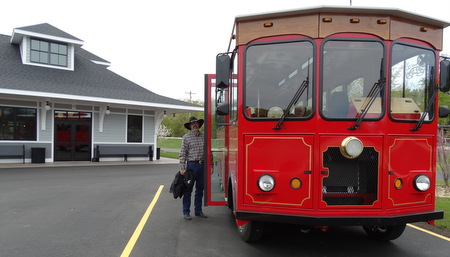 Getting on the trolley 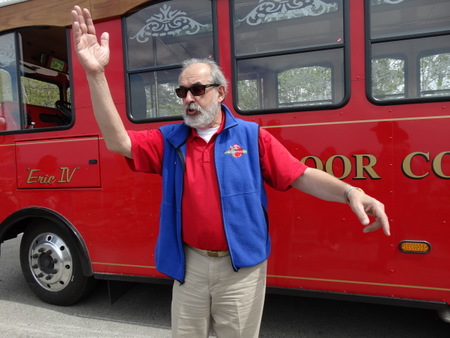 Our guide, Bob — “Spelled the same whether you’re dyslexic or not!” 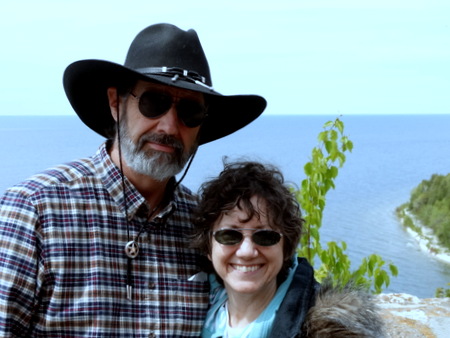 Us, on an overlook in Peninsula Park 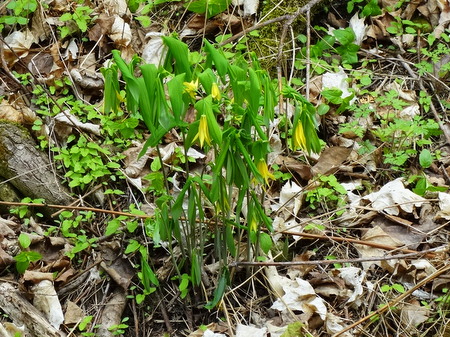 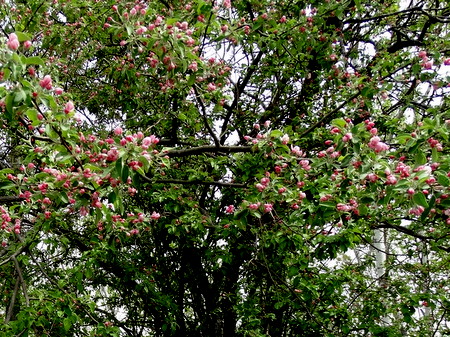 A crab apple tree in bloom 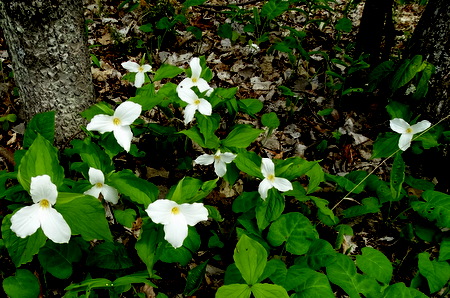 Horseshoe Island: You can just barely see the sort of “arms” of the horseshoe where ships have sought shelter during storms. The horseshoe is on the SE side of the island and most storms come out of the NW.

After the tour, we stopped in at a couple of the stores Bob told us about: 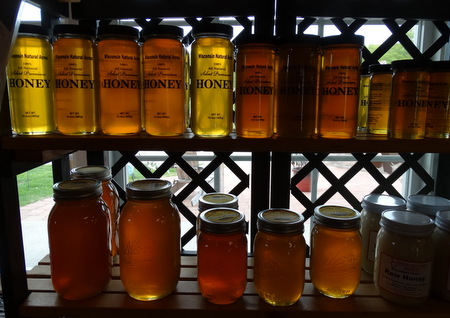 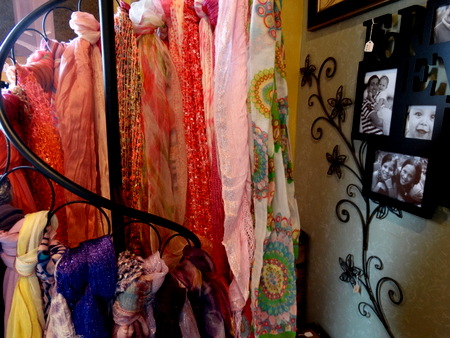 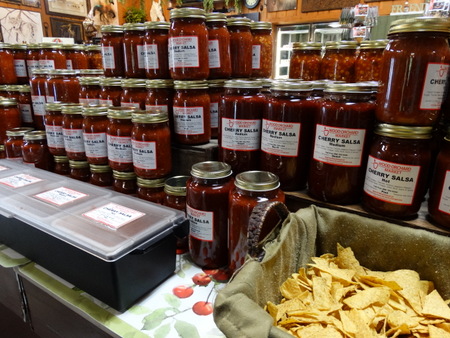 Cherry salsa…Door County is known for their cherries and you can find cherry products everywhere you go here. 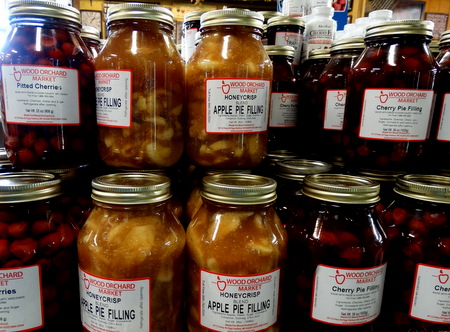 Pie fillings the way Grandma used to make them! 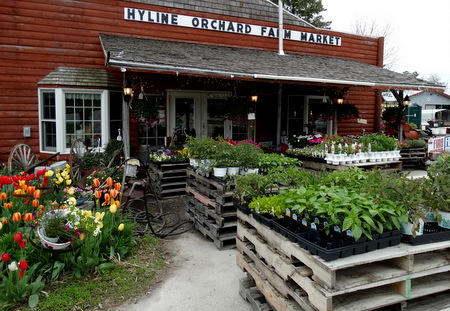 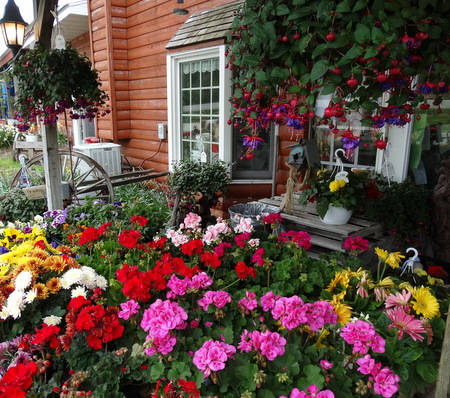 We also explored Juddville out of curiosity.  It’s so small that most of the locals don’t know anything about it, and what’s more, they don’t care to know anything about it. I found out in later research that Josiah Judd and his family were the first settlers in this area until the Scandinavians came in.  It makes me want to go back to my family history and see if Josiah was an ancestor of my mother’s. 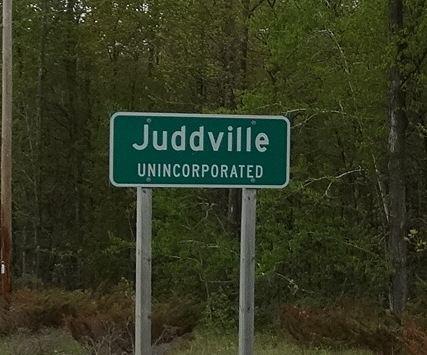 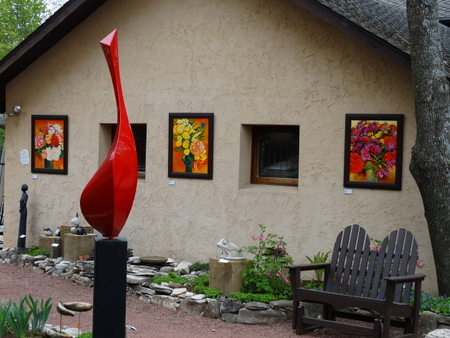 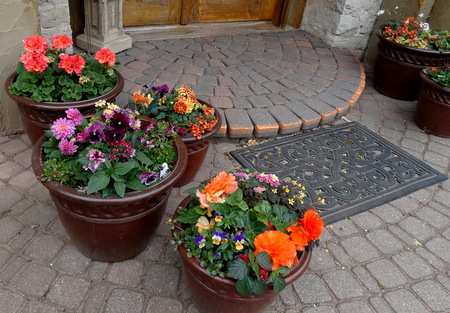 At the front door of the gallery 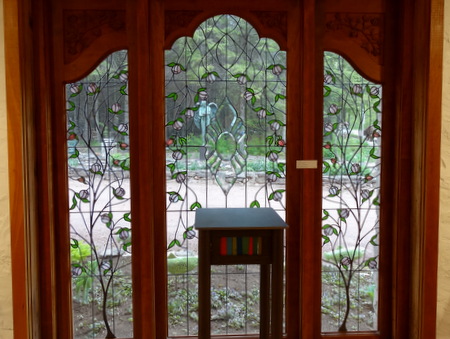 Looking from the inside out 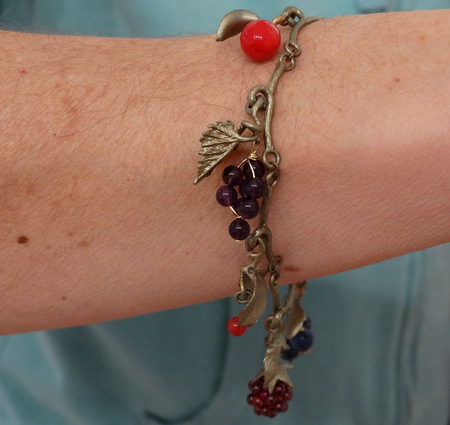 I fell in love with this bracelet and the docent let me try it on! I regretfully had to leave it there. 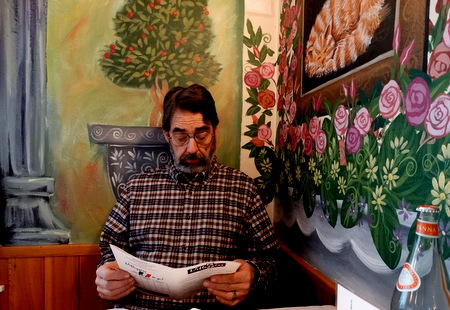 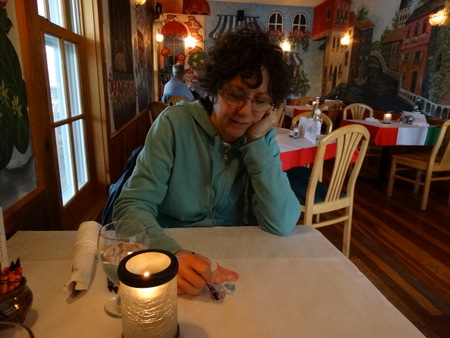 They had a paper tablecloth and crayons too keep us entertained while waiting for our order. 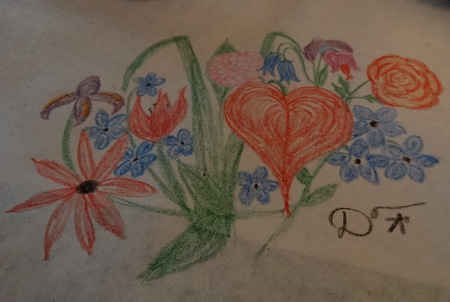