This is the first chance I’ve had to blog since last weekend, and I want to tell you all about the exciting duck race!

As of Friday evening we’d only sold nineteen ducks and we thought the duck race was going to be a bust.  The moment we opened the doors on Saturday morning we realized this was going to be a big thing.  We had a bucket full of numbered ducks and people came in and pawed through them looking for their favorite numbers.  By the time we stopped selling ducks we’d sold ninety-six of them!  Parents were buying one for each child in the family as well as for themselves.  We “sold” the ducks for $5 apiece, so you can do the math to figure out how much money was in the pot.

I thought we were going to have to have the Activity Center open during the race, but I soon realized everyone was congregating down by the river, so we closed Activities and went down to join them.  Two Workampers were on either side of the river holding a line between them for the finish line.  John was upstream with the bucket of ducks.  Three Workampers including our boss, Jeff, were standing in the river right behind the finishing line.  At exactly 11:00 John dumped the bucket of ducks out in a slip stream that had a current that took a bend and then headed for the finishing line.  Everyone was cheering their numbers on.  A purple duck was clearly in the lead as it crossed the line, but the next two weren’t far behind.  After the first three ducks had been captured, all the children ran out into the river and collected the leftovers and put them back in the bucket on the bank.  Another Workamper with a bullhorn read off the winning numbers, but as yet there were no names attached to them.

I carried the winning ducks back to the Activity Center and looked up the names of the people next to the numbers.  Several small groups came into the Activity Center as well as John and Jeff.  I read the names out and was surprised to find that the first prize of over $200 went to a pre-schooler, the second prize of over $100 went to a babe in arms, and the third prize of $95 went to a teenager.  There are going to be some good college funds there!

Here are some pictures from the day: 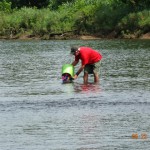 John dumping the bucket at the start of the race 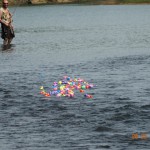 The ducks take the first corner 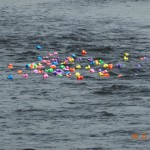 Coming into the home stretch 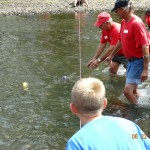