I find that when there are campers here, I can’t do much on my computer in the evening because they’re all on the internet, so I have a couple days worth of stories to tell.  🙂

Saturday morning we found ourselves in the middle of a lake just about.  I told you about the lightning storm we had on Friday night.  We also had a lot of rain (I guess about 2 1/2 to 3 inches) and the ground here doesn’t soak it up very well, so we had to step carefully when we got out of our RV.

The first thing Mark did for work Saturday morning was get into the Easter Bunny costume so that I could take pictures of the kids with the Easter Bunny.  (I will insert some of them at the end of this post.)  Mark is a natural ham and everybody loved him, except for a tiny girl and a tiny boy that were scared of him and didn’t want to have anything to do with him.

All of the staff congregated at the Activity Center to pick up bags of eggs to hide while we kept the kids busy here.  As the time approached for the Easter Egg Hunt, the sky had grown as dark as dusk and it was only about 11:00am.  Rain drops began to fall just as the kids were being sent out to hunt for the eggs, and as soon as they had scattered to hunt, the sky opened up and drenched them.  When they had found their eggs, kids were coming in with water dripping off their ears, their hair plastered to their heads, but with big grins.  A few of the eggs had prize tickets in them so the kids began opening their eggs looking to see if they’d won anything besides candy.  A good time was had by all in spite of the downpour.

The rest of the afternoon was sunny but quite muggy.  The only folks who came into the activity center in the afternoon were wanting to rent bikes or do miniature golf, so it was a very slow afternoon.

Last night after dinner, Mark and I went to the local store to get groceries.  As we were checking out, someone called our cashier and told her that a severe storm had hit Muskogee and it was headed our way.  We stopped in at our manager’s house on the way back home and he said he was watching the weather reports and he was about to open the storm shelters here in the park.  We came in and put our groceries away and then Mark and I walked over to check out the storm shelter we can see from our RV.  We’d never seen the inside before.  It’s like a hallway with no windows and only the one door.  No one was there, so we figured it wasn’t time to panic yet.

On our way back to the RV, we stopped under the porch roof of the club house to watch the sky.  Imagine if you will that two people have a large sheet of metal between them and they are waving it up and down.  Imagine lights and sparks shimmering on the underside.  Imagine the sound of the metal being constantly bent up and down.  That’s what I was imagining as I watched last night.  The clouds were constantly lighting up all over the place with lightning and the thunder was ongoing; one long rumble that lasted the whole time we were watching.  Without warning it started hailing and pouring down rain and Mark unlocked the Clubhouse door so we could stay inside.  There’s a bathroom in there with no windows or doors, but we didn’t feel threatened enough to go in there.  When the storm abated some, we ran back to our RV.  Turns out that was the tail end of a tornado, or a funnel cloud actually.  Our manager told us this morning that the storm had really broken up at that point and we weren’t in any real danger, but some of the campers at the other end of the park had availed themselves of the storm shelter.

This morning Mark and I got up an hour early and went up to ask Melanie if she’d like to join us for a sunrise service of sorts.  We had already talked with her about it a couple weeks ago and knew she wanted to be counted in.  She and Mark and I met by the river and I had Mark read the Resurrection account from John 20:1-18.  As he finished, the clouds in the east were rosy and the reflection of the sunrise through the trees on the river was lovely.  I could tell Melanie was soaking in the peace.  We talked a little about this and that, and she thanked us for inviting her to spend that little bit of quiet time with us.

Our work day started with a few children coming in to return equipment or pick up prizes and ceramics they’d painted, but then things got really quiet.  Everyone was checking out to go back to their real lives.  I’m so lucky this is our real life!  Mark and I took down the Easter decorations and began preparing for next weekend, but it really wasn’t terribly busy.  This afternoon Mark went off to help maintenance with repairs, and Melanie sent me around to a bunch of cabins to check and be sure the lights were off, the windows closed, the heat turned down, and that no food was left in the refrigerators.  I actually found an unopened candy bar, two boxes of toaster strudels, and the remaines of a fancy latte creamer.  They said I could keep it.  Jeff called it “booty for checking the cabins”.

Now the sun is shining and it’s fairly warm and Mark is building a fire outside to cook dinner over.  And speaking of Mark, here are the pictures I promised: 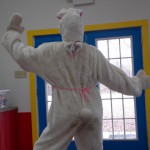 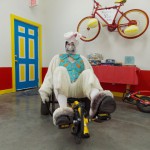 The Easter Bunny got bored waiting for the kids to return and decided to try one of our bikes. 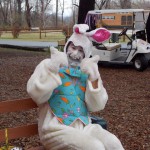 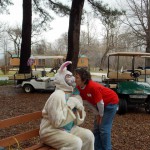 I got caught kissing the Easter Bunny! 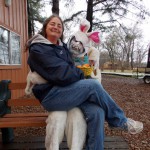