Next summer Legacy is going to make it mandatory for Activities to be closed for part of the day and outside activities to be planned.  Jeff had asked us to experiment with it this summer, so I decided that Family Olympics Weekend was the time to try it out.  The Activity Center was closed until 3:00 in the afternoon on Saturday and we had all outdoor activities going on.

I worked really hard on the field games for the kids.  Mark helped me set up the field and we just barely made it in one golf cart trip with all the stuff I had to carry out there.  In most cases I had more than one thing going on at once to accommodate different age levels and sexes.  There were six stations: 1) three different tossing games, 2) a sack race/3-legged race, 3) a leap-frog race and hula hoop contest, 4) a jump rope or ball kicking relay, 5) a water balloon tossing contest (to help them cool off), and 6) parachute games.  I had prizes for every single child for every game.

I did the whole thing by myself, but it was a hot morning and in spite of drinking water, I was a little ill by the time Mark came to pick me up with all my equipment.  We had lunch in an air-conditioned restaurant and I felt better.  Fortunately, for my afternoon activity I was able to sit in the shade and hand equipment out to the players and let them go do their own thing.

Of course, by the time we opened up at 3:00, everyone rushed in to do crafts in the air-conditioned Activity Center.  Within the three hour period that we were open, we did over $400-worth of sales and rentals.  Mark ran the train once and we left early because we had to go show the movie later in the evening.  The other two got so swamped they had to call in reinforcements.

I predict that this is what it’s going to be like when Legacy mandates that the Activity Center be closed for half a day every day next summer and outdoor activities be planned.  I’m glad I was directing this year when we could keep the Activity Center open most of the time.  Still, I call this a successful experiment because everyone had fun and said how much they enjoyed the weekend. 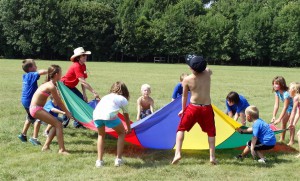