What a spectacular day today was!  It started out with a thunder shower between about 6:00 AM and 8:00 AM.  At the last big boom we finally woke up for good.  By then the rain was also calming down, but we were surrounded by water again.

I made oatmeal with raisins and nuts for breakfast and we took our time getting ready to go out, but by the time we left here the sun was shining and there was blue sky.  However, the storm must have shaken all the local turtles because we kept seeing them trying to cross the road to get to the other side.  I missed two of them, but I may have hit a third.  🙁

We went into Sallisaw first to tend to some business, get groceries we can’t get at Harps, and have lunch.  Then we headed to Fort Smith to go shopping.  There’s a place called Tip Top Western Wear that sells the real stuff.  Mark wanted to get me set up to look a little more like him.  He bought me some cowgirl boots and a straw cowgirl hat as well as a couple tops.  We also got some jeans at Wallmart later as well as some underthings.

Right after we left Tip Top, we found the Fort Smith Museum.  If you’ve read or seen True Grit, it’s about Fort Smith.  If you’ve heard of “the hanging judge”, Judge Isaac Parker, you can’t believe everything you hear.  True, he convicted 160 men and four women to hang, but only seventy-nine of those men actually were hanged.  Judge Parker didn’t believe in capital punishment, but the only sentence available to him at the time for murder or rape was the death penalty.  He tried to help the prisoners as much as he could, including buying new suits for those who were hanged.  Fort Smith was set up to try to bring peace between the Osage and the Cherokee first.  Then outlaws started fleeing to the Indian Nation and Oklahoma was in bad shape.  Even the first judge and his administration was corrupt, but Judge Parker brought law and order to the area.  More of his deputies were killed in the line of duty than the number of men he hanged.  We got to see what the jail cells looked like, Judge Parker’s courtroom, and even the gallows outside.

It was a day when Mark’s laughter sounded so good after a week of him being in pain.  It was a day when my son called and sang Happy Birthday to me and we were able to talk for nearly half an hour.  On the way home there was a pretty soft pink and blue sunset to add the final touch to the end of a perfect day.

Here’s a picture of us at the judge’s bench in court: 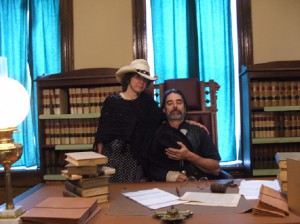