This is the final segment of my nephew, Nate’s, story about his trip to Africa.  After spending most of the trip working on the education team, he finally gets a chance to go on safari.  Here is his wrap up: 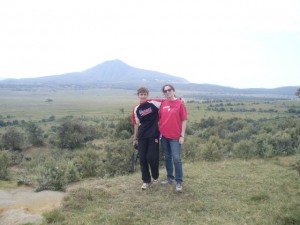 Nate and his mom, Lauryn, in the Great Rift Valley

From Eldoret, we got back into some tourist vans like the ones that drove us to Huruma and Kangundo and took the six-and-a-half hour drive to a town only an hour and a half’s drive from Nairobi, known as Naivasha.

Naivasha is a rather small town, but right next to some amazing national parks, including one that surrounds the nearby Lake Naivasha.  We stayed the night in another “resort,” which, sad to say, was even worse than the one in Eldoret.  To make matters worse, a bar next door to the hotel played music loudly almost nonstop the whole night, which kept my mom awake, but not me.  After breakfast, we hopped in a different vehicle, a tourist bus, and drove to a lodge in the Lake Naivasha national park.  There we boarded safari vans and actually drove through the park.

The park is in the middle of one of the planet’s most beautiful and dramatic landscapes: the Great Rift Valley, which runs through the eastern part of Africa.  The Rift Valley is formed from where two volcanic plates pulled away from each other centuries ago, and the park is in possibly the most beautiful and best-preserved part of it.  The park is also home to rhinoceros, leopards, giraffes, one male lion, two types of zebra, and several different species of antelope, including impalas, not to mention the huge herds of wildebeest (no, that is not a misspelling) and warthogs (African wild boar).  We saw all of these at one point or another, except for the single lion.  After our circuit through the valley, we had lunch at the lodge inside the park, where we got the safari vans.  Then we took the hour-and-a-half drive back down to the original guest house inNairobi.  After staying one more night there, we went to a souvenir market in the city, which, though describing it in great detail would fill the whole paper, I can say was a very wild and literally interactive experience.  Then, at night, we went to the airport, said good-bye to the drivers that had taken us most of the way throughKenya, and got on a plane bound for Amsterdam.  Once there, we had breakfast, then went onto another plane that went back home, where I arrived ten and a half hours later.

My trip to Kenya was a powerful experience.  I got a glimpse into the great sorrow that that country is experiencing, how something as simple as a motley band of confused American missionaries could bring joy to people who lived in a country where the only goal of life was to earn enough to support your family, whatever it takes.  It is a situation that I hope I live to see changed for the better.