Here is the third part of Nate’s story.  In this section, he mentions that the VHS band won state.  He is referring to his school, Vernonia High School, and the band he is in that won a statewide school band competition last year.  His original school was flooded and while a new one was being built, classes were held in modular buildings.  He refers to that in this section too. 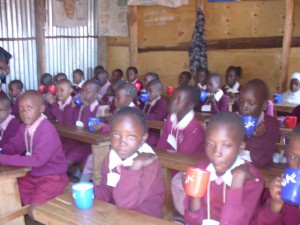 Students in a crowded classroom in Jamii school

The day after that, we had about a five-hour drive to one of the larger cities in Kenya: Eldoret, in the beautiful Great Rift Valley, where we would be teaching at an elementary school known as Jamii School.  Since our drivers couldn’t be asked to drive us ten hours a day between Eldoret and the guest house in Nairobi, we had to stay in a hotel in Eldoret.  It was a “resort,” which in Kenya just means a hotel that serves you excellent breakfasts and dinners.  The rooms themselves could be compared to a motel in America, except with a mosquito net over the beds.

Jamii School was in the middle of a humbler area of town (basically more slums).  It was surrounded by a wood and barbed wire fence that anyone determined enough to get inside could, with some effort, jump over.  But the kids and staff there were very friendly.  All three days we went, we would get off our bus (which actually was a bus) to the sound of the elementary school kids chanting a welcome to us.  The school building was a bit smaller than our old modular buildings, and was made of a hand-cut branch framing covered with sheet metal.  Each classroom was about 8 by 12 feet in area and each had several narrow desks with even narrower aisles in between them.  And all the floors were made of dirt, except for the concrete floors of the staffroom.  To make matters worse, each tiny classroom had to hold between 30 and 60 kids.  That means I don’t want to hear any more complaining about class sizes getting too big over here.  The members of the educational team split into groups that would teach each of the six classes for the next three days.  I was grouped with the oldest people in the group, who I got along with pretty well.  The one problem was that due to their large amount of seniority over me, I often deferred to them when something had to be taught, though, like at New Dawn, I did pass out materials often.

For three days, Wednesday through Friday, we taught the story of Noah’s Ark to the children, taught them some songs that one of our team members had written before the trip started, as well as some memory verses that went with the story.  The kids were practicing for a play they would do about the Noah’s Ark story on Saturday.  When the day came, I figured out that the play wasn’t the only thing that would happen inside the mainly empty shell of a church building a little ways from Jamii.  Sure, the day started with the play, which consisted of the school principal, whose name was Basilus, reading the story from the booklet we used to teach it to the kids, punctuated at times by the kids, who were lined up on stage, saying one of their memory verses and singing a song.  When the play ended, there was great applause.  I thought that it was over with then, but Basilus and the Jamii staff had something else in mind for us.  Basilus got up on stage and one by one, invited each of us to come up to the platform upon which the Jamii kids had just performed their play.  Once we got there, we received a thank-you note, each specially dedicated to its recipient.  Walking up to the platform myself, I experienced a sort of pride and sense of accomplishment that I had not felt since the VHS band won state last year.

Several minutes later, as I had joined the rest of the team up on the platform (we were all gathered there now), a friend I had met at Jamii and during a PE session (yes, they have PE in some Kenyan schools) had helped with soccer practice, gave me a beaded bracelet with the Kenyan red shield and the word “Kenya” in white letters.  The boy had an identical bracelet on his arm.  And the bracelet will forever remind me of the trip.  Since then, I have worn it every day, and probably will keep wearing it every day for a long time.