I haven’t had a chance to talk about Wednesday yet, and now I have news from today as well, so this could be a little bit longer than usual!

I spent a long afternoon in Sturgeon Bay on Wednesday.  I wanted to be down there for a presentation my quilt guild was going to be making at 4:00, so I planned several other visits while I was down there.

The first was visiting my pastor in her new winter home.  There’s a couple than plans to retire to Door County in a couple of years, but their accountant told them they should buy a place now because rates are low and it would help with taxes, I guess.  Since the couple really isn’t ready to live in the house yet, they offered to let my pastor and her husband stay there through the winters and use it for church gatherings or whatever.  What a blessing to my pastor!  She and Dave live in a trailer on her mother’s property, and she was dreading this winter when she will be doing chemo and living in a freezing trailer.  The house is near the church, close to town, and yet in a private setting next to a wetlands preserve.  And it’s beautiful and spacious.  I told Nancy, “You’re going to be so spoiled!”  God has been taking care of all her needs since she began this journey. 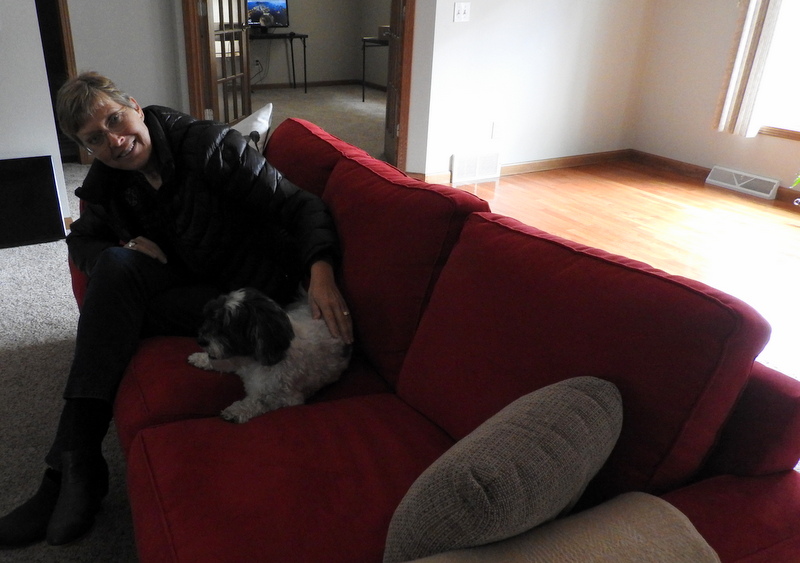 Nancy and Buster sitting on a couch one of the church members loaned them.

Nancy was telling me about her upcoming treatment.  (Medical technology has come a long way!)  This coming week, Nancy is going to be fitted with a skull cap.  Apparently, the reason you lose your hair when you get chemo is that the chemo goes after any active cells.  Hair follicles are active because your hair keeps growing.  When hair follicles are cold, they sort of go into hibernation.  So this cap she’s going to be fitted for will be put on her head when she is about to get her treatment.  Then they’ll put a helmet on her head that will have tubes going back and forth inside with cold water running through them to keep her head cold for about seven hours at a time.  To someone as cold-blooded as me, that sounds awful.  It doesn’t sound terribly fun to her either, but there is a local program that pays for this for cancer patients if they don’t want to lose their hair, so she’s grateful for that.  I remember this summer, one of the things that bothered her the most was thinking that she’d lose all her hair.  God is so good!

After my visit with her, I went to the Sunshine House in Sturgeon Bay.  They have a program for developmentally disabled adults where they can work for pay and learn new skills.  A friend of mine from church, Kathy, and I have been talking about putting together a sewing class for young people next spring, and Kathy contacted the Sunshine House to see if they might have anyone who would like to participate.  The woman I spoke with sounded interested, but she’s going to have to train several of her clients how to use scissors to cut a straight line and how to sew on a sewing machine.  The project I have in mind for them is those little hats I made a couple of months ago and demonstrated in one of my blogs.  It’s very easy, but it’s a good thing I am able to give her until next May to train a few of her clients.  She said that they like helping in the community, so it sounds as though this might be something they would be interested in.

My next stop was at a Habitat for Humanity house that was being dedicated on Wednesday.  The family has three children, one of whom is confined to a wheelchair.  The house they were living in was too small for her to really get around in her wheelchair, and she was having to share her room with her five-year-old sister.  Their room was so small that only one of them could be in it at a time.  The family looked all over for houses, but they couldn’t find anything that was accessible at a price they could afford.  They applied to Habitat for Humanity, but they really didn’t think they’d be accepted.  They were overjoyed when they heard they were, and the mom has put over seven hundred hours of sweat equity into the house along with other volunteers. 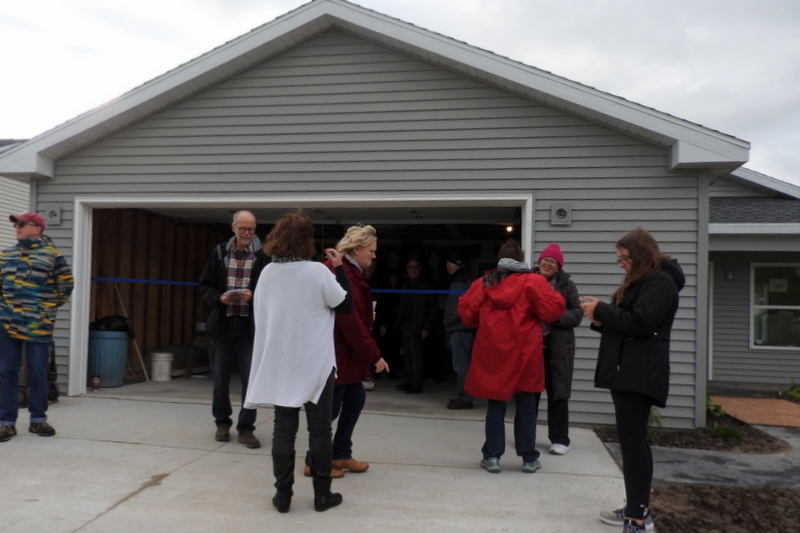 People gathering at the house 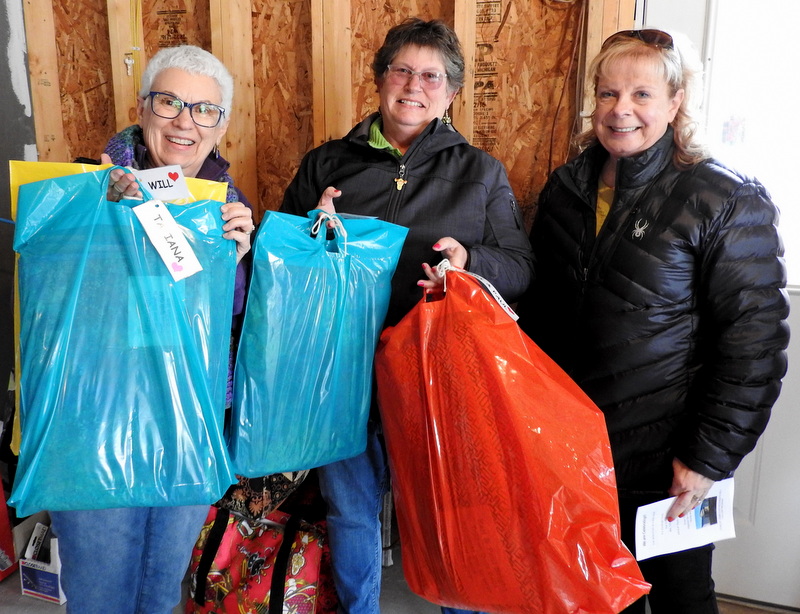 Three representatives from the Trillium Quilt Guild who came to present the quilts we made for the family. 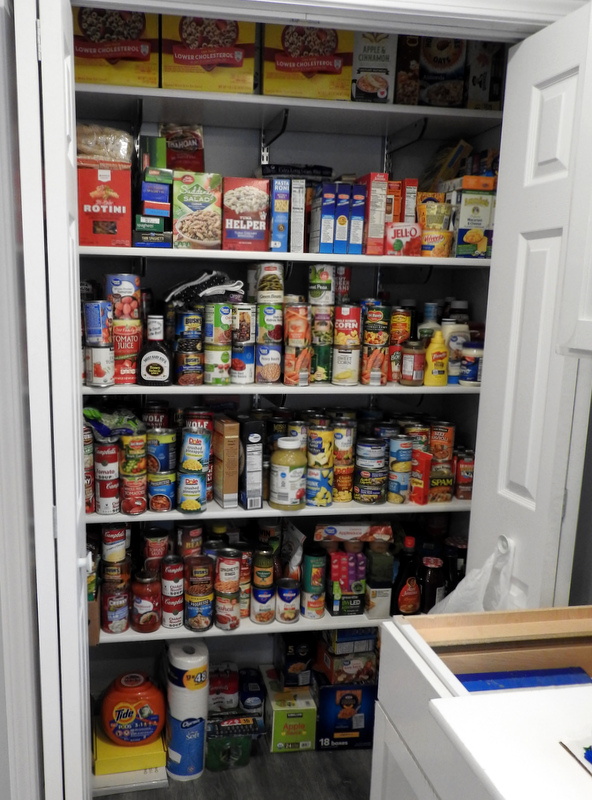 People had stocked their pantry from floor to ceiling with food and other things they will need when they move in! 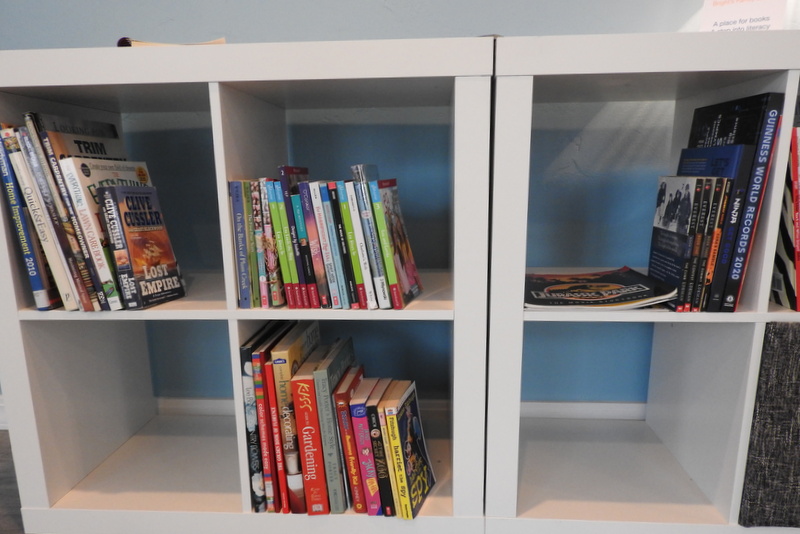 There’s an organization called Altrusa that promotes literacy, so they donated a bookshelf and filled it with books for the whole family! 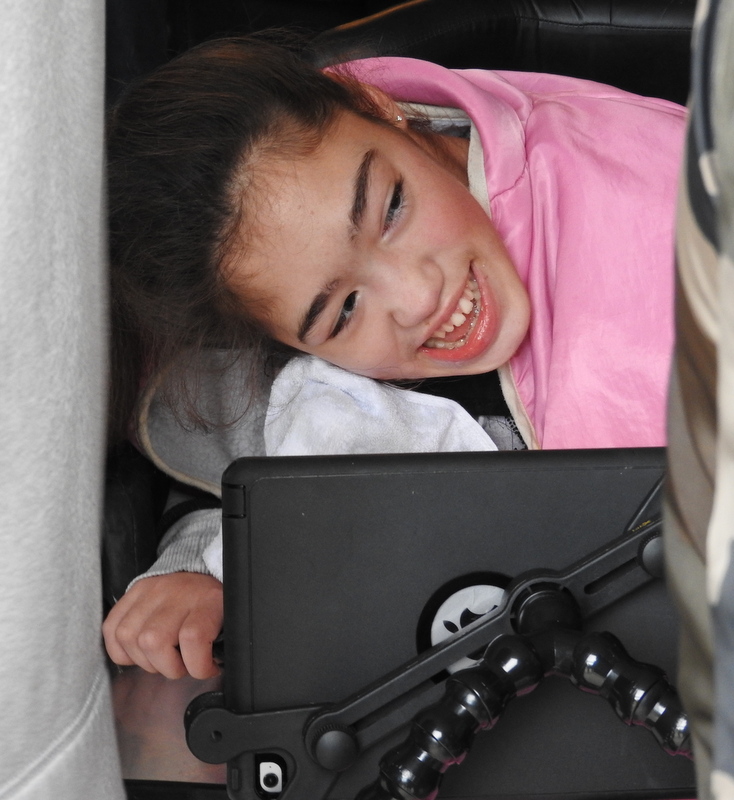 The girl who is in a wheelchair was full of smiles.  The computer that’s attached to her wheelchair gives her a voice. 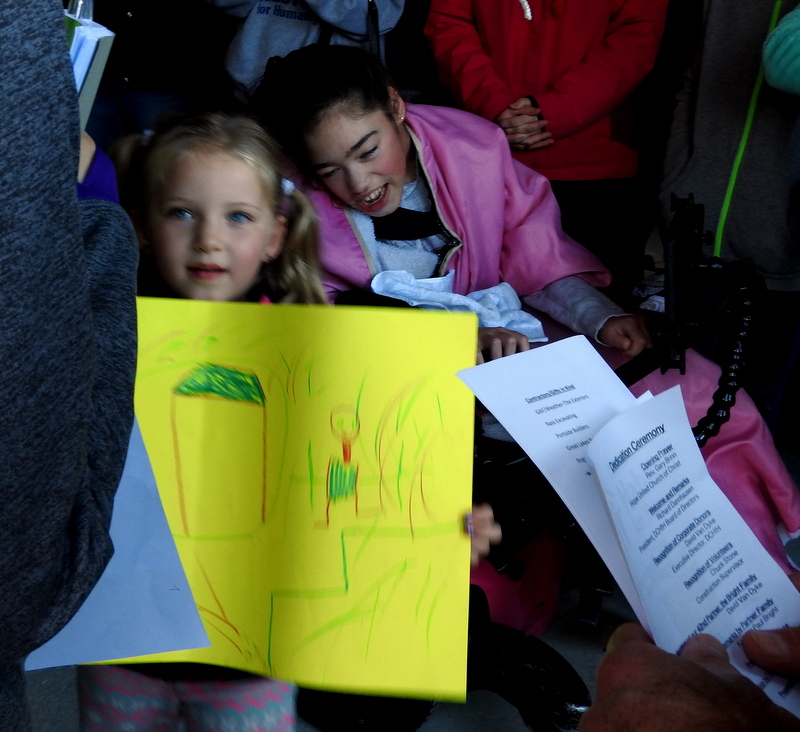 Her little sister drew a big thank you card for Habitat for Humanity. 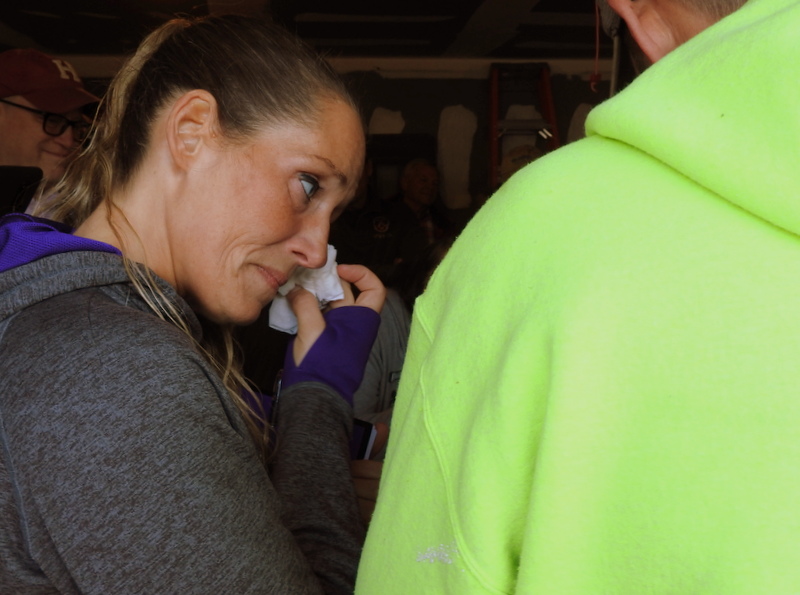 The mother was emotional as she shared their story. 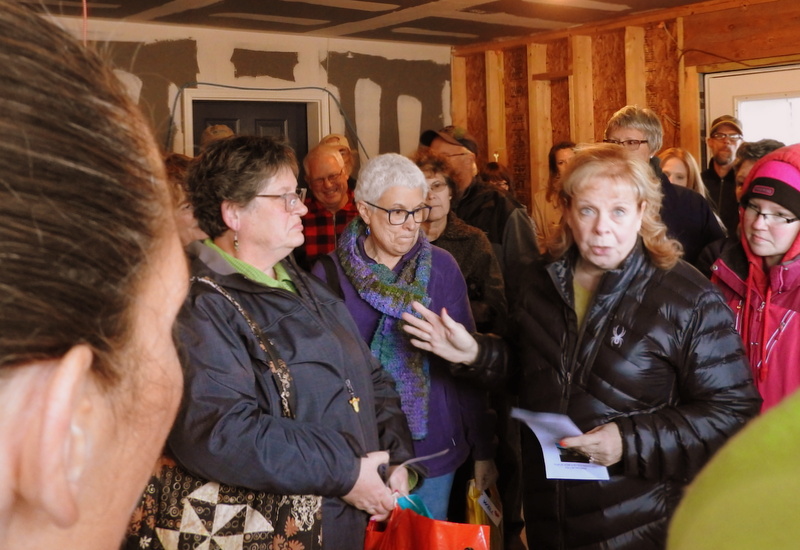 The presentation of the quilts 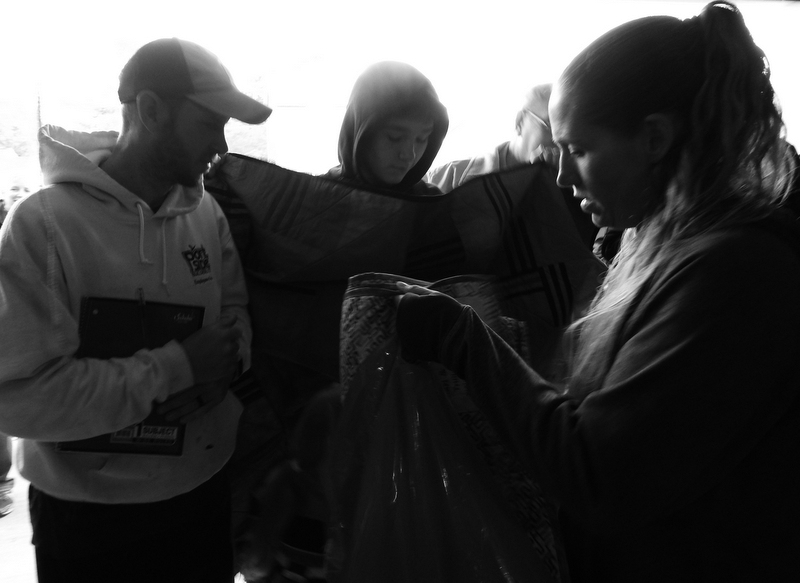 I accidentally hit the black and white button on my camera as I took a picture of the boy opening his quilt. 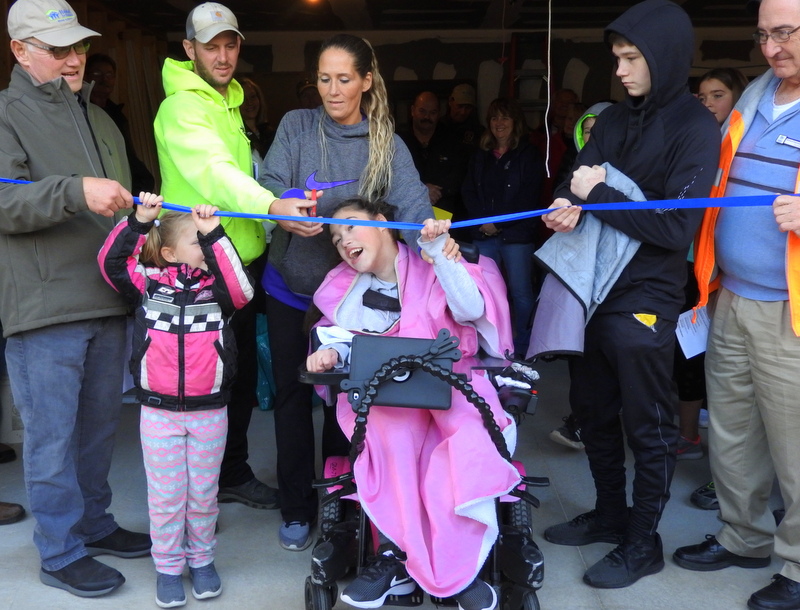 The family gathered to cut the ribbon to officially dedicate their house.

Afterward, two of the women from the quilt guild invited me to get dinner with them.  I had a really good time getting to know them better, and they seemed interested in my lifestyle as well.

You may recall that the last time I wrote, I said that Mark and I are planning to head to Oregon the first week of November, but we have no place to stay and neither of us has a job.  I wrote to say that between studying 66 Love Letters by Dr. Larry Crabb and listening to Lauren Daigle’s CDs about God’s goodness, faithfulness, and love, I was not as anxious about our future as I would normally be.  I asked for prayers that God would use the situation to teach me holiness and that I would put my trust in Him because He knows the future.

I have done a little bit of job hunting online, but I haven’t known for sure whether to look for work in Oregon or Arizona.  We know we can stay in the parking lot of my church in Arizona and Mark has been working on starting his business there, so if need be, we could go a couple of months early.  I would miss spending the holidays with my family, but I have been at peace about however things go.

Yesterday, I had a call from a woman in Oregon who had gotten my application and wanted me to come in for an interview.  I explained to her that I’m still in Wisconsin and won’t be there until November 11th, and she told me to give her a call when I’m settled in and she may still be interested in interviewing me by then.  Then today, Mark got a call from UPS.  He had worked for them several years ago before starting to work for the RV company that just told him they no longer need him.  UPS is interested in talking with him about coming back to work for them.  He hadn’t even applied there.  They just called him!  This evening I was catching up on my emails, and my best friend had written to invite us to park at their house for a couple of weeks when we first arrive.  She had even checked with her town to find out what the rules are and she’s willing to fill out the paperwork so that we can stay with them the two weeks.  She has apologized several times that it can only be a couple of weeks because of the town’s ordinances, but hey!  This looks like God’s leading to me so I’m not looking a gift horse in the mouth!

All along the way, I have been marveling that God has just been lining things up for us without me being anxious and trying to fix everything myself!  Isn’t God good?  And all the people said, “_____!”