I got Dobby as a kitten in 2005.  Mark got Kimba as a kitten in 2006.  They are old and they are beginning to have health issues.  The most sane thing we could do would be to leave them in peace until they go to that big litter box in the sky.

Mark and I had some grocery shopping to do at Walmart late this afternoon, and as we were carrying our groceries out to the truck, Mark spied a truck in another lane that had puppies in it.  He looked at me and said, “You want to see them, don’t you?”  Well, yes, I love to hold little puppies, but it was obvious that Mark was eager to see them too.

We were told they were purebred German shepherds.  Their sign said they were selling the puppies for $100, but they said they would sell them for $80.  There were five or six puppies in the back of the truck, but I was drawn to the smallest of them.  She fell asleep in my arms.

Mark and I talked about what it would mean if we bought her.  How would the cats react?  We would have to get puppy supplies.  What would we name her?  While I held her, Mark went back into Walmart and got a collar, a leash, puppy food, and a squeaky toy.  He also got cash back so he could pay for the little black puppy.

We finally agreed on a name for her on the way home — Tucson!  I carried her into the RV and Mark picked Kimba up and brought her close.  Kimba sniffed for a few seconds and then hissed.  Mark put her down and picked Dobby up.  He sniffed Tucson for a little longer than Kimba did, but it resulted in a hiss and an attempted swipe of Dobby’s paw.  It will take some time for them to get used to her.

We are working on house training her already.  Mark sets his alarm for every half hour and one of us takes her outside.  When she goes potty we lavish praise on her.

This is the first time she has been away from her parents and siblings.  She’s been whimpering, but she is finding comfort in her interactions with us.  She is adorable! 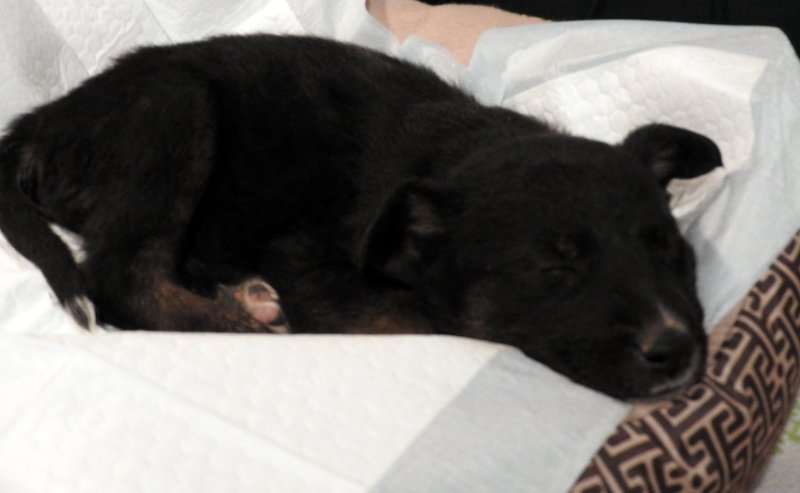