We find ourselves in an enviable position.  We are wanted in two different places next summer!  Here’s the scoop…

All last winter I was in contact with a man who was interested in working where we worked last summer in Alaska.  Unfortunately, he was the only Workamper of all the ones they hired who actually showed up which meant they needed more from him than he was willing to give.  He left their employment part way into their busy season.  Last year there were Mark and me, another couple, and a solo Workamper there and we all stayed through the summer.  They had mentioned then that it was the best summer they’d had for help.

Mark and I loved Alaska and we really liked the people we were working for even though we had problems with the other Workampers.  We have maintained a friendship with the Jernigans.  This afternoon Mike Jernigan asked if we’d be interested in coming back next summer.

We had talked about maybe going back again some day, but we have set a goal of spending at least one night in every state on the continent, and so far we’ve slept in every state west of the Mississippi River except Hawaii.  With Wisconsin we’re starting on the east side of the country and I had intended to be somewhere near southwestern Michigan next summer so I could see where my maternal grandmother was born.

In the meantime, we’ve fallen in love with Door County and everyone here seems to like us and want us to come back next summer.  Even the campers and the seasonals frequently tell us how much they appreciate the work we do to keep the bathrooms clean.

Talk about being tugged in three different directions!

I wish we had this kind of thing happening in the winter too.  We don’t have a definite job lined up for this winter, although by then Mark will be a certified inspector and could do something with that.

Speaking of Mark’s certification, he has completed his two mock inspections.  Tim and Kathy graciously let us inspect their travel trailer and their class C motorhome.  The first inspection has come back as a final approved report.  We’re still waiting to hear on the second one.  Here are pictures of the two vehicles Mark inspected: 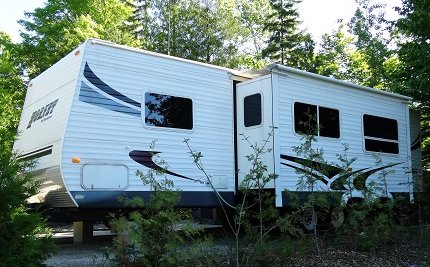 This is a travel trailer that Tim and Kathy rent out to campers.  Our report on it has been approved and sent to Tim. 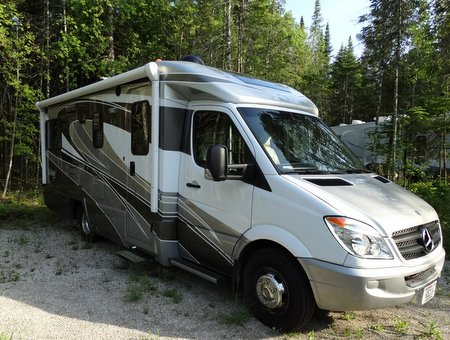 This is their class C motorhome.  We’re still waiting for final approval on the report we did on this one.

2 thoughts on “So nice to be appreciated and wanted!”