So let me fill in what we’ve been doing the last few days.  The activity center where we’ll mostly be working has three rooms.  There’s a large craft room, a medium-sized room that will be our snack bar, and a tiny room that’s been used for storage, but which we plan to use for an office.  At one end of the craft room is a little store for selling crafts, and along one wall of the craft room is a line of three-wheeled bicycles for rent.  We are in charge of all this, plus the arcade next door.

The first two days we spent cleaning and sorting through boxes and bins of supplies.  We moved a glass-doored refrigerator into the snack bar for beverages, and it’s my understanding that we’ll also be getting a freezer so we can sell ice cream bars and such.  We have two display boards outside and Caylee and I got one of the display boards changed before she had to go to school.  We’ll get the other changed next weekend.

Mark photographed the trout fishing tournament on Saturday, and on Sunday he photographed the awards “ceremony”.  I think you can see the pictures if you look at Marval Resort’s Facebook page.

Today we focused on the craft store.  Mark brought his laptop so he could make an inventory list and he got things better organized on the shelves.  I was given some paper crafts that weren’t selling in the general store, so I set up a display of those.  Mark decided he’d like to have twelve of each kind of T-shirt in the shelves in the store, and there were bins of the shirts in our office area, so I inventoried those and filled in where I could in the store.  We also began making labels for the shelves.  We were so into it that we hardly wanted to stop at the end of the day and we brought work home with us.

The first two days it was bitterly cold and I wore my boots.  I was exhausted and foot sore both nights.  However, last night the air became balmy and today I wore my regular shoes.  I ended the day much better.

To celebrate the end of our first partial week, we went out for pizza tonight at one of the two restaurants we’ve been able to find in town.  When we pulled into the parking lot, we saw a bunch of young people around a truck in the parking lot.  Two of the young people were wearing white dress shirts, so we knew they were LDS missionaries.  We parked next to them and when we got out of our car, Mark started talking to them.  He explained who we are and that we work on Sundays and asked if they had anything going mid-week.  There was another man with the group and he took Mark’s information to see if his records have come to their ward.  Mark told them where we live and the missionaries said they’d like to come and give us a lesson sometime.  Mark promised me he’s not going to let me be ganged-up on again!

Now we are going into our mid-week weekend and we have all sorts of ideas how we want to spend it.  It’s good to be working full time.  So far we are loving our work, but it’s nice to have a couple days off too!

I’m going to try again to add pictures of our new home: 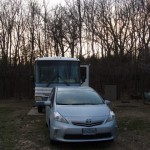 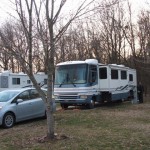