I was born into a family that belonged to a very small sect called the Thompson Brethren.  Actually, they didn’t call themselves much of anything except The Meeting.  The Thompson Brethren were started back in the early 1900s by a series of tent revivals led by a man named Nels Thompson.  They were (and are still) very Bible based.

My grandfather, Dee McCroskey, was the head minister of the Portland Meeting.  There are a handful of meetings spread throughout the western United States.  My grandparents converted early in their marriage, and my dad was raised as the oldest son in the meeting.  On my mother’s side, her mother didn’t convert to the meeting until after her divorce to my maternal grandfather.  My mother may remember a few early Christmases.

The meeting didn’t believe in celebrating Christmas.  To kind of make it up to the kids, they got together for a winter conference in Gerber, California every year during the school break for Christmas.  I hadn’t even heard of Christmas till I entered school.

My parents often opened their home to ministers and missionaries, and one year when I was still pre-school aged, we had a man staying on our couch in the livingroom.  I believe his name was Walter Forberg.  It must have been sometime in December, and during the night we had snow.  I remember waking up to the brightness in my room from the snow outside, and the quietness.  I was still in my jammies and I tiptoed out to the livingroom to look at the snow through the floor to ceiling windows.  No one else in the family was up yet, but Walter was up and dressed.  He was sitting on the couch, blankets and sheets neatly folded, watching the snow fall.  He saw me come in and he beckoned me to come and sit on his lap.  I think he probably wrapped his blanket around me because our house could be cold in the morning, and then he sang Silent Night to me.  I had never heard the song before, and I was entranced!  To this day, that is one of my favorite carols.

When I was about 9 or 10 years old, my family left the meeting and began attending Walnut Grove Baptist Church, a small country church in Vancouver, Washington.  We decided that first Christmas that we would celebrate, but it still felt kind of sinful to us, so we decided to celebrate on Christmas Eve instead of Christmas Day.  My maternal grandmother, although she still attended meeting, was always up for anything where she could give her grandchildren presents.  She came over to celebrate with us on Christmas Eve, and she brought an evergreen branch that had been blown down into her yard.  My older sister, Sherill, and I knew a little about how to celebrate Christmas by now because we attended Clark County Christian School.  We made a paper chain with scissors and glue and crayons and put it on the branch Grandma had brought over.  That was our first Christmas tree.  I can still remember the first Christmas gift I gave.  I didn’t have a lot of money, so I bought a diamond needle for our family’s record player.  That was my gift to the whole family.  The very first Christmas gift I was given was a small New Testament and Psalms with my name engraved on the front cover in gold.  I still own that Bible and it is with me here in the RV.

Most of you can’t remember your first Christmas as vividly as I can, but there’s one thing I hope you will remember:  Christmas is Jesus’s birthday, or at least it’s when we celebrate His birth.  Long ago I grew weary of holiday specials on TV that proclaimed they were about the true meaning of Christmas.  Invariably they were about family and love and getting what you most want for Christmas.  They don’t get to the heart of it!  The true meaning of Christmas is that God sent a Savior to the earth to teach us what the kingdom of heaven is like, and then to take away the barriers between us and God through His death and resurrection.  That’s why I thought it so appropriate that my pastor was preaching about Christ’s death and resurrection up until this last Sunday.

Before opening presents or sitting down to a feast with loved ones, read the Christmas story in Luke 2, and remember to say “Happy birthday, Jesus!” 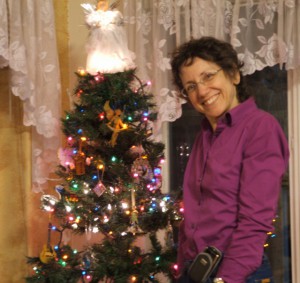