Wendy picked me up this morning for the second day of our reunion.  Today was, I had thought, supposed to be a tour of our alma mater, but it turned out to be self-led.

Jamey and Sarah met us at the flagpole outside Wilson High School.  I was trying to explain to them what it was like growing up in the early 70’s.  Nixon signed the peace treaty and brought our troops out of Viet Nam.  He was impeached and resigned.  There were demonstrations against the war, against pollution, for equality.  Flower children put flowers in the ends of guns.  Kent State.  Haight-Ashbury.  Man, it seemed like our generation could accomplish anything! 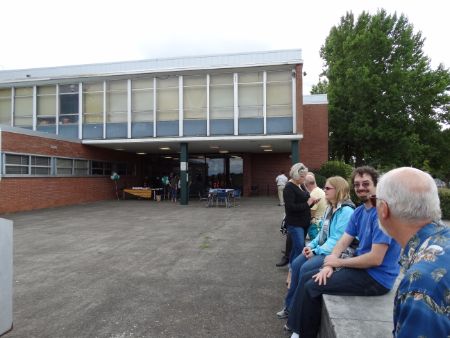 Then the doors to the building were opened.  I half expected to have to walk through a metal detector at the door, but there wasn’t one.  Someone made a crack about the bathrooms in the north hall.  Jamey asked me what the joke was.  That was the bathroom where the kids smoked, and sometimes the smoke smelled kind of funny.  I told Jamey and Sarah about the teachers who had been influential in my adolescent life, the classes I enjoyed and those I didn’t.  I relived the day I took a picture of a girl being loaded into an ambulance while I was on assignment from my photography class, only to learn later that day that she had died.  That was a traumatic event for me…to realize that at our young age we were not invincible.  I told Jamey and Sarah about the year the black [sic] students had been bussed in to integrate our school, and the tensions on both sides.

We ran into someone who was taking a picture of a mural she’d painted in a stairwell forty years ago.  She said she’d donate money to the school just so they could afford to paint over her “awful” painting.

The only real change I could see at the school was the pool.  They’d added a water slide and some other stuff.  I told Jamey and Sarah about having to run across the snow to jump in the heated pool in the winter. 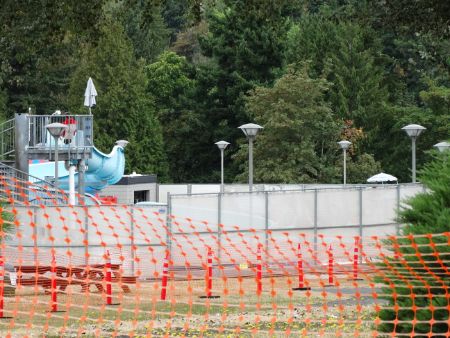 Is that a water slide I see in our old pool?

What a trip down memory lane!  That alone was worth the flight back here for the reunion.

After that Wendy went her way and I went with Jamey and Sarah for lunch.  Then back to Mom’s house where Jamey helped me with some technical difficulties I’ve been saving up to ask him about.  They stayed to visit for a bit with their grandparents and have ice cream and then left. 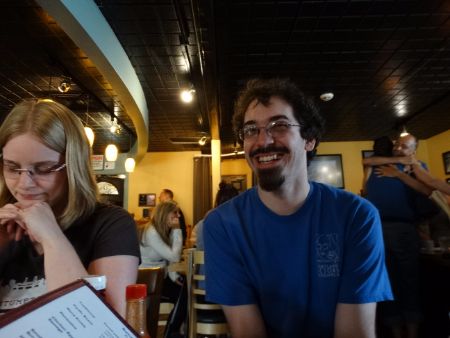 Lunch with Jamey and Sarah 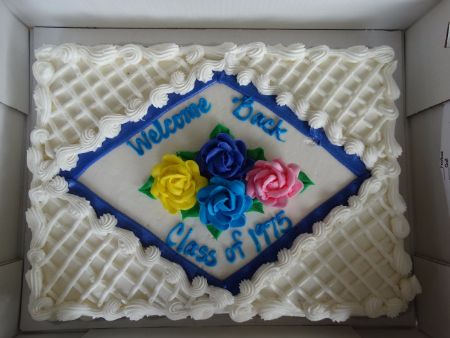 A cake in honor of our class