We leave on Wednesday for Ellison Bay, but in the meantime we’ve been working on getting some things done.  This weekend we ceased working for a bit and had some fun.

It’s been very cold and we even had a couple days of snow last week, so we put our bird feeder out.  We’ve been enjoying the critters who come to it: 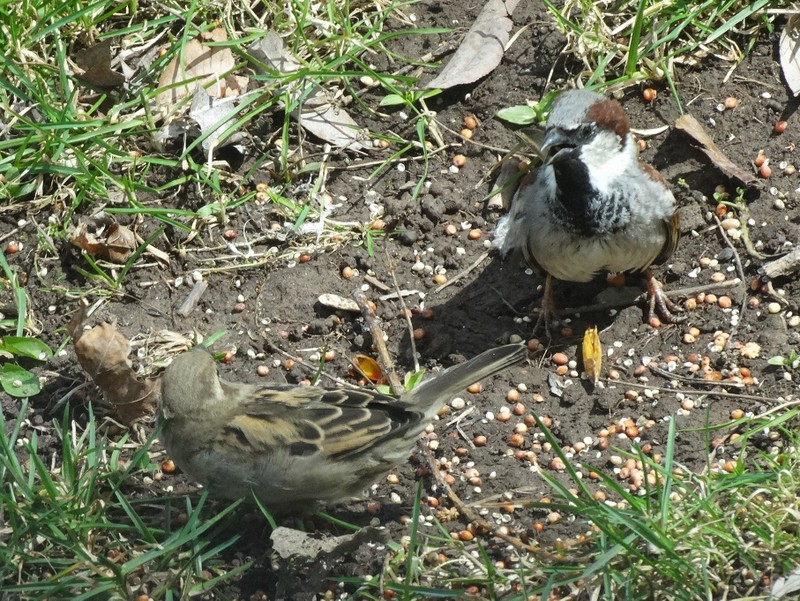 Meet Mr and Mrs of some species. Anyone know what these are? 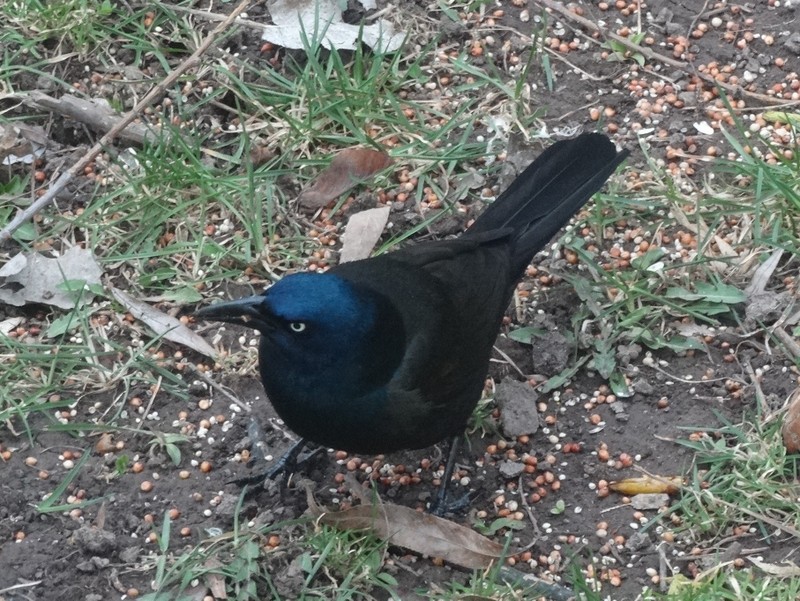 This angry looking fellow has a shiny teal-colored head and neck. What is he? 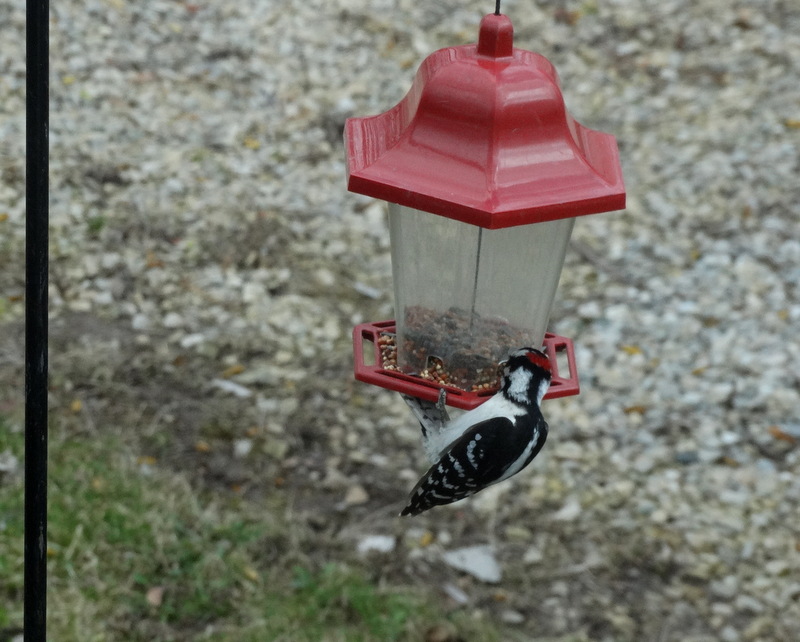 What’s black and white and red all over? Can anyone tell me? 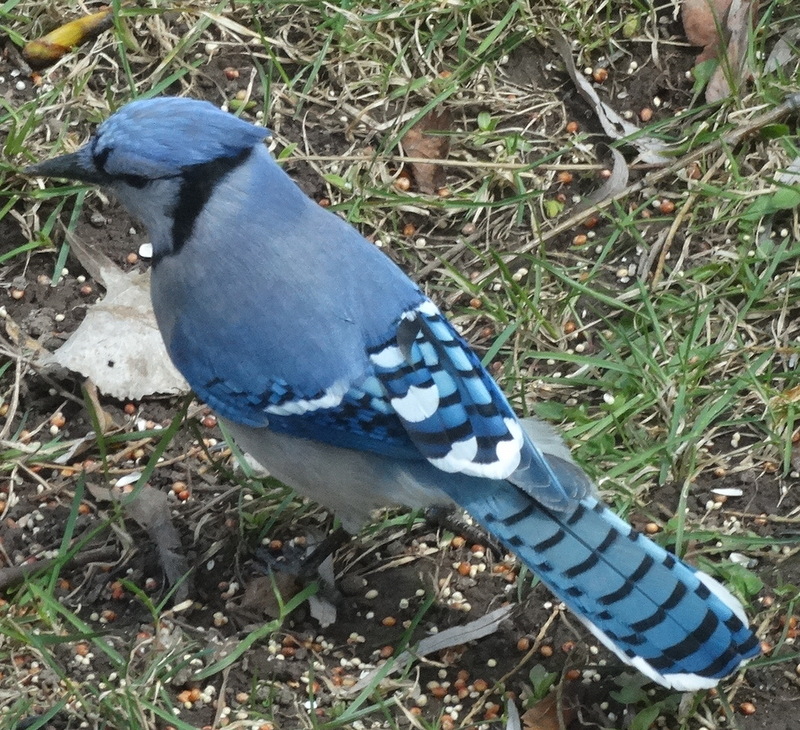 I’m pretty sure this is a blue jay. Correct me if I’m wrong.

Technically, this goose didn’t come around our bird feeder, but he does live in the creek behind us. 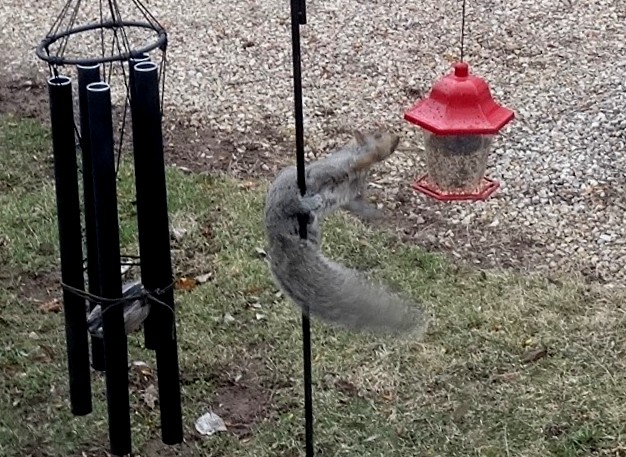 There’s a story behind this little guy…

The squirrel (above) was eating the seeds that had fallen on the ground, and as I watched, he looked up and saw the bird feeder.  I know he was thinking, “Ah! There’s the source and if I can reach it I can have it all.”  He took a running jump and actually managed to climb up the skinny pole opposite the bird feeder, but what then?  He hung on tight with his back paws and reached out with his front paws flailing in the air, but he lost his balance and fell to the ground.  He tried it several more times before finally giving up.

Saturday Mark and I decided to explore this area a bit.  There’s a largish lake south of us called Lake Winnebago.  I thought at first this must be the area where Winnebago RVs are made, but upon doing some research I found that they’re made in Winnebago County, Iowa.  The area still has a claim to fame in that there is a town on the western shore called Oshkosh (Oshkosh B’gosh, maker of children’s clothing).  I was expecting to see a clothing mill in Oshkosh, but our first time through all we saw was a military equipment plant.  How disappointing!

We continued south till we reached Fon du Lac at the south end of the lake where we stopped for lunch.  The hostess saw the camera around my neck so she seated us at the only available table next to the windows with the lake view.  As I was looking over my menu, a woman at the table next to us told me that there was a bald eagle flying low over the lake.  I grabbed my camera but I was too late to catch the eagle.  However, I did get some good shots of the lake: 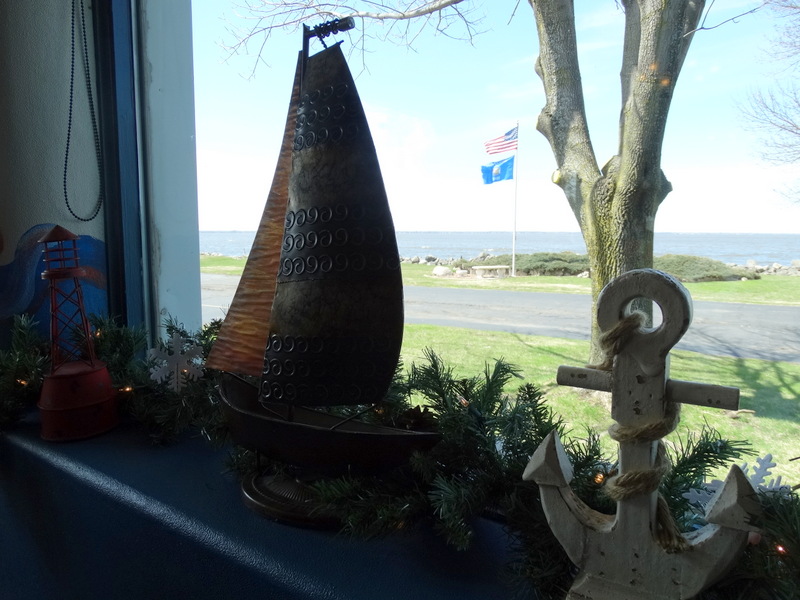 The decorations at our window 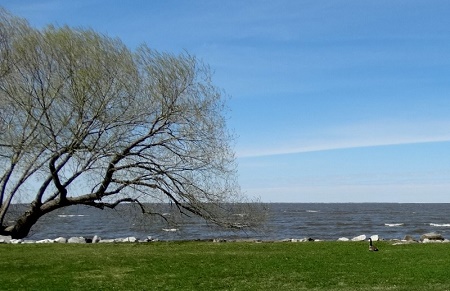 A view of Lake Winnebago 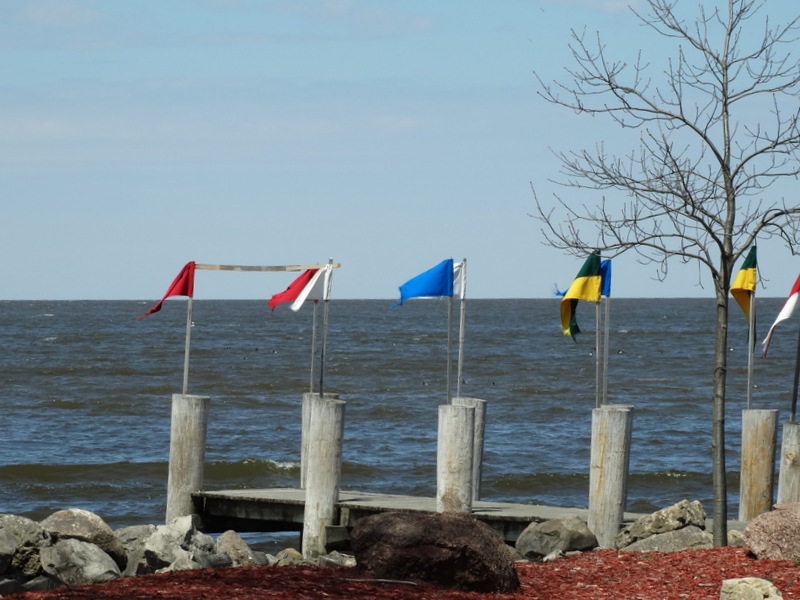 The dock behind the restaurant

So I struck up a conversation with the woman at the next table.  She told me that a few miles up the road was the Sheephead Capital of the World.  I asked if there were bodies to go with those sheep heads and she laughed.  She explained to me that sheepheads are an invasive, bad tasting fish and that Wisconsin would be willing to send them all down to Texas if they’d like.  Apparently they’ve had no takers.

She told me that in the winter the lake freezes ten to twenty inches deep and that one could drive a car across it if one so desired.  In fact, people pull fishing shacks out onto the ice and do ice fishing.  I couldn’t envision how they could stay warm in their fishing shacks without melting the ice and Mark explained to me that the shacks are like small trailers with a hole in the bottom.  You can see one in this picture: 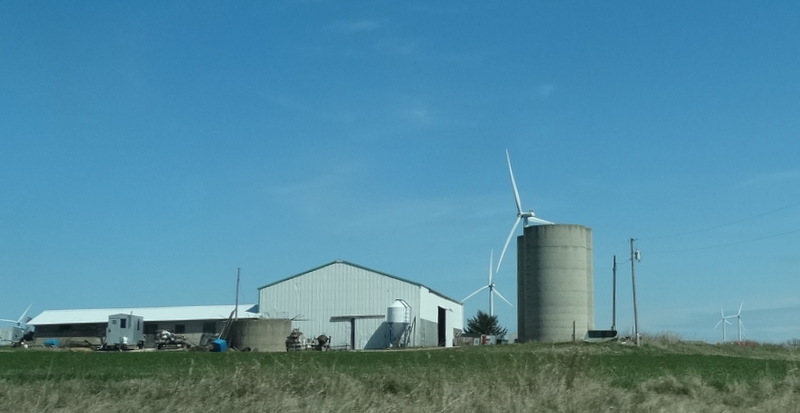 After we finished lunch we continued driving up the east side of Lake Winnebago.  There is a contrast between farms, like the one above, and mansions around the lake. 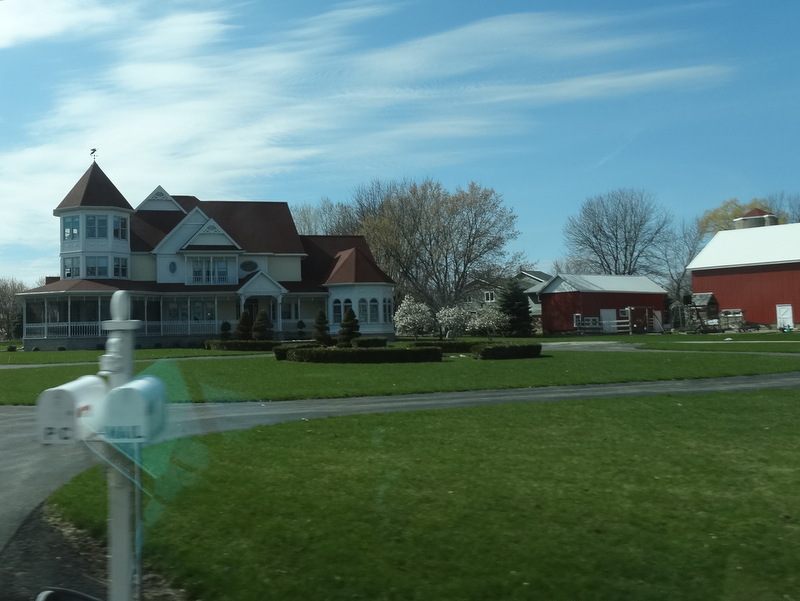 There were even more impressive mansions than this, but I had a hard time capturing them

When we got back up to Appleton at the north end of the lake I thought we’d be heading back home, but instead Mark turned south again to Oshkosh. 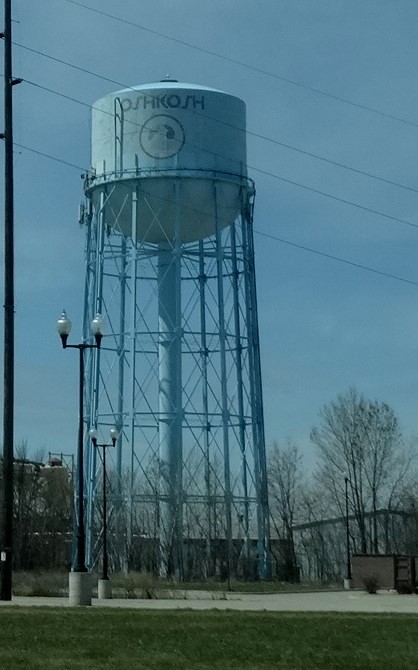 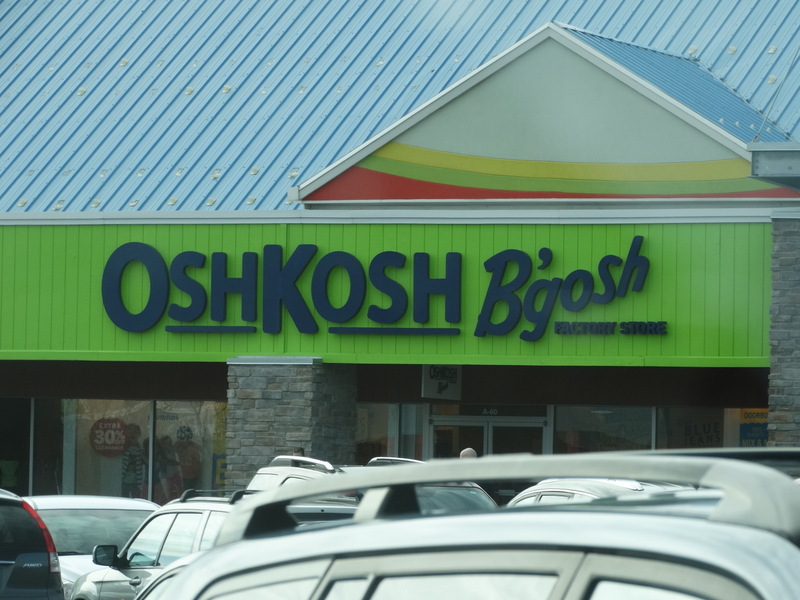 Mark and I went into the store and looked at all the cute children’s clothing that had me cooing and wishing to be a grandmother.  There was also a Carter’s store next door (they do children’s clothing as well) so we went in there.  This whole mall was factory outlet stores.  I’ve never been to one of these places before because generally I don’t approve, but since we were there we walked around the whole mall and went into whatever stores suited our fancy.  We bought a few things and I got all twelve lights on my Spark People activity tracker lit up, meaning I walked at least 4500 steps around the mall.  Now I can say that I’ve been to one of those factory outlet malls.  I don’t have a burning need to go again in the near future, but at least I can say I went to an Oshkosh B’gosh store in Oshkosh, WI!

Sunday we found the closest LDS church and attended services there.  Then we had Sunday dinner and afterward, Mark took his Harley for a ride.  The weather was in the 60’s, which is the warmest it had been all week, so it was a good day for a ride.  I walked around our RV park several times to get my steps in and spent the time talking with God. I prayed for some of you.  Did you feel it?  When Mark came back we had a campfire.  It was a good day at the end of a good weekend.