Mark and I have been busy in class this week.  The guys spent two day inspecting the instructor’s 5th wheel.  Then us wives had to learn how to fill out the sixty-some point inspection report on the computer from the tests the guys did and the things they observed.  In the late afternoon they would put each of our reports up on the screen for critique.

We have until Tuesday to perfect our reports based on comments from the instructors and our classmates before we turn them in.  Then within two weeks we need to do a mock inspection on our motorhome.  After we pass, Mark will be a certified RV inspector.

The next step after that will be taking an online class and doing two premier inspections.  If we pass that we could be accepted into the RV Inspection Connection (RVIC), which is our ultimate goal.

There were four students in the class (not counting us wives).  Mike is my new friend, Betty’s, husband.  He and Mark are the only two that are aiming toward becoming part of the RVIC.  Mike has a background as an insurance salesman and Betty comes from the banking industry — both industries being potential strategic partnerships for RV inspectors.  They have a leg-up!

Ricky is a guy Mike and Betty met at their first class and they’ve become friends.  Ricky is the manager of a campground in Indiana and plans to use his training there.  He spent a good part of his life singing in a country band, but he gave that up when he became a Christian a couple years ago.  Mike and Betty plan to go up and help him at his campground for a couple months this summer.

Lance used to work at an RV dealership.  If he wanted to be part of the RVIC I’m sure he’d get in because he was like the A student in class.  He knew what he was looking at and what buyers would be interested in knowing.  Mark got teamed up with him the second day of the inspection and tried to watch and learn from him.  Lance is planning to go into business for himself and do inspections for sellers, with the idea that sellers would get more value for their RVs with an NRVIA (National RV Inspection Association) inspection report.

We have spent every evening having dinner together with our classmates and getting to know them.  We’ve also spent several dinners with the instructors, Bob and Sally, in attendance and picking their brains about the business.  The RVIC is on the cusp of some exciting collaborations and just needs to get more inspectors in place around the country.  We’re getting in on the ground floor.

The really cool part is that all of us are Christians!  Every meal we’ve had together we’ve started by saying grace.

There were running jokes in the class.  One of the questions on the inspection is about looking for problems with the toilet mounting and the guys kept teasing Bob about  problems mounting his toilet.  Mark was kind of like the class clown, so today one of the guys gave him a disposable bootie (worn over the shoes while inside the client’s RV so as not to track in any dirt) and he put it on his head.  This was a fun group and we made some good friendships here.

Mark with a bootie on his head! 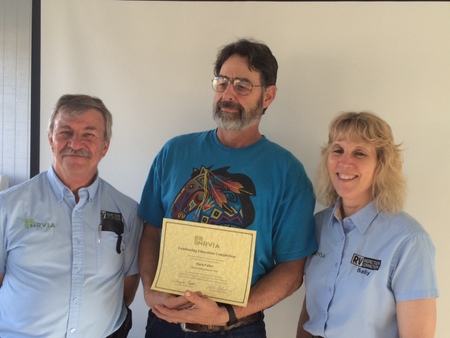 Mark getting his certificate from Bob and Sally at the end of the class.