I know that most of you won’t get this in time for Easter, so happy belated Easter.  This evening we took Aunt Marg to see Heaven is for Real.  It’s based on a book by a pastor named Todd Burpo.  Reverend Burpo tells the story of his four year old son, Colton, who had a near fatal illness and came back saying he’d been to heaven.  If you haven’t seen this movie or read the book, I highly recommend it.

At the end of the movie, Reverend Burpo came across a painting by a young girl named Akiane Kramarik.  Mark and I once went to a show of some of Akiane’s paintings.  It was recommended to us by my father and first stepmother when my stepmother was fighting a losing battle with cancer.  Akiane’s story is as interesting as Colton’s.  Her parents were atheists.  At the age of three she began telling them about visions she was having of heaven and of Jesus.  She began drawing her visions at the age of four, and by the age of six, she was painting.  Her parents became Christians as a result of her visions.

The reason I mention this is because in the movie, Todd Burpo was looking online at one of her paintings of Jesus, and Colton said, “That’s Him!”  I leave you, on this Easter evening, with the painting both children said was of Jesus: 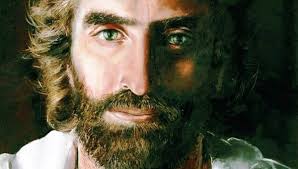 "Prince of Peace" by Akiane Kramarik