The kids that have been here all week that I thought might be Mennonite turn out to be Holiness.  I’m glad they aren’t Mennonite because yesterday the boys broke Mark’s jousting pole in front of several Workamper witnesses.  Mark built that left-handed, so he was pretty upset.  It’s fixable, but he’s waiting till just before the jousting tournament today to put it back out.

Mark had his lab appointment yesterday morning, but I went in costume all day.  When Mark got back he put on his costume as well.  For those who haven’t seen our costumes, I’ll include a picture at the end of this blog.  We had pictures taken of us with various campers throughout the day and everyone loved our costumes!  At the end of the day, one of our neighbors asked to take our picture.  When he took it on his phone, we appeared to be glowing!  It was probably an effect of the humidity, but it looked really cool!

Linda spent all day working on cardboard decorations for the train Mark will be driving today.  She’s going to turn the train into something a little Medieval.  She’s got a dragon for the engine and she’s turning the cars into wooden carts.  I’ll try to get a picture of that to send later.

A whole bunch of ceramics and crafts I ordered arrived yesterday, so I was busy opening them, pricing them, and stocking the shelves.  We should be set for a while.  It was hot work to do in my costume though.  Here’s a picture of our costumes: 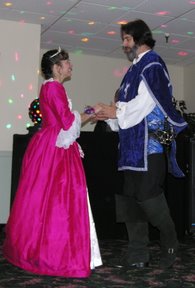