This morning we got up and got the RV all set up for another move.  We left Silver Falls State Park and came up to “Our Park” in Oregon City — Clackamette Park at the confluence of the Willamette River and the Clackamas River.  I said in my last post I’d tell the story of how this came to be our park.

Mark and I were planning to get married on August 8, 2008.  We were going to have my brother-in-law, Rob, marry us.  But that summer my step-mother was put on hospice for breast cancer.  Things weren’t looking good, and Mark and I were uncertain what to do.  We had had a pre-marital counseling session with Rob on June 13 (Friday the 13th) and we were driving back and feeling a little depressed when Mark said, “I have a crazy idea.  Why don’t we get married today?”  I said “OK!” so we headed straight to the courthouse and got our marriage license.  However, it being a Friday afternoon, all the judges had gone home.  We didn’t want to tip off anyone we had invited to the wedding that we were eloping ahead of time, so we started calling every pastor we knew between us.

My Quaker minister, Ken, was studying, but he said he’d marry us if we could find two witnesses who knew us.  We did some more frantic calling around, again trying to find folks who wouldn’t otherwise have gone to our wedding, because we still hoped to have one.  No one could come on the spur of the moment like that until Mark thought to call the missionaries from his LDS church.  All of us converged on Clackamette Park that evening, and one of the missionaries took pictures of us as my pastor married us.  Ever since then, we’ve called Clackamette Park our park.

Tonight a couple from Mark’s church invited us to dinner.  I really like them — Linnell and Craig.  Linnell wanted to see a video I had told her we had of us, so we took that along and watched it.  We also told her our story.  Here’s a picture from the evening we eloped, June 13, 2008: 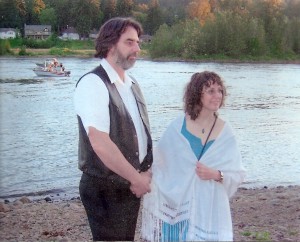 Mark and Denise on their wedding day.

1 thought on “From Oregon City”