The president of my Wisconsin fan club, Judy Boldt, was after me today for not writing anything since my bicycle accident, so I’m dedicating this post to her!  This may be a bit of a mish-mash because I can’t quite decide which of several things to write about, but here goes:

We all made it through the busyness of the Labor Day weekend, and Tuesday morning before I even woke up to say goodbye, Chris and Deb Hoover left.  Our counterparts, Bill and Barb Zimmerman, will be leaving tomorrow, as will Captain Doug who has been staying in the staff area for the better part of the summer.  Captain Doug isn’t an employee here, but he was giving the captain of a tour boat company some time off.  Tim and Kathy were letting him stay with us as a favor to the tour captain who gave our whole staff a tour in June.  As soon as Chris and Deb left, Joe and Kari Velez moved from next door to us into Chris and Deb’s site across the way.  The changes around here are beginning to be mind-boggling!

We have been so busy with the remodel this summer that we haven’t gotten out to do very many fun things.  Tonight Kathy gave us tickets to see a play put on by the Peninsula Players.  The play was a sort of farcical remake of Alfred Hitchcock’s 39 Steps.  Oh man!  Three men and a woman played 150 characters in the course of two hours.  They changed costumes so fast they’d walk off stage in one costume and turn right back around in another.  At one point two of the men played three characters each just by changing hats right in front of us.  It was hysterical!

That’s another thing to love about working at Wagon Trail Campground:  Tim and Kathy give us free stuff all the time, and while we’re out having fun on them, they’re covering our evening walk-throughs for us.

Well, I’ve mentioned the remodel so for that, at least, I have pictures.  Here is the progression throughout the summer: 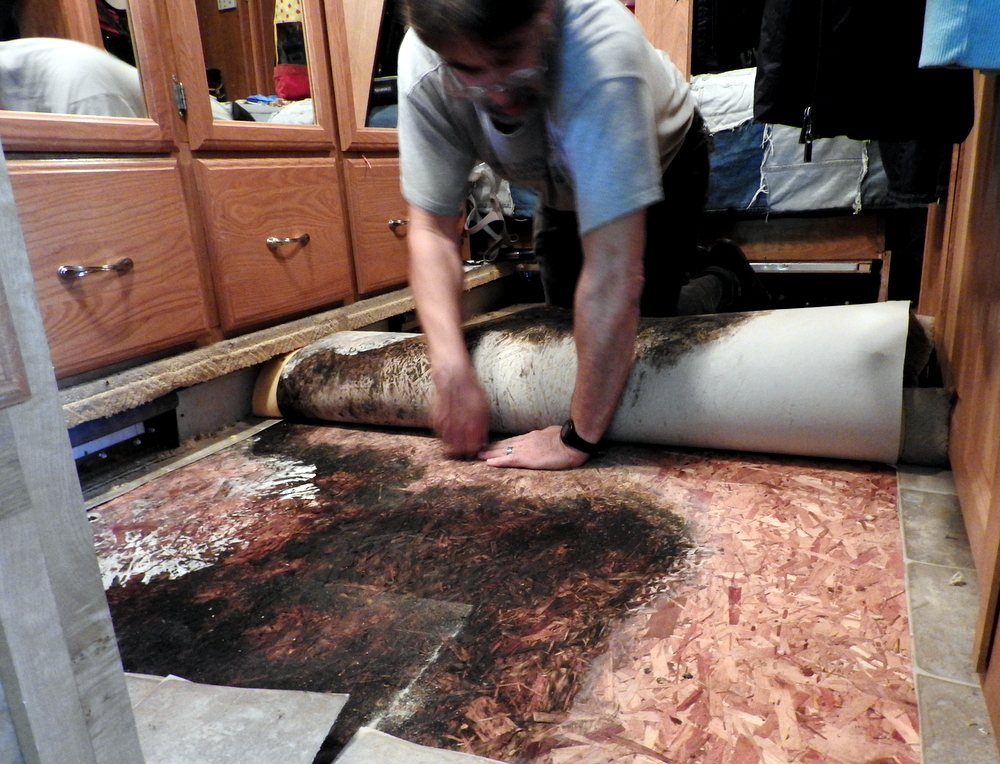 We felt a soft spot in the floor, so Mark pulled back the carpet and found this. 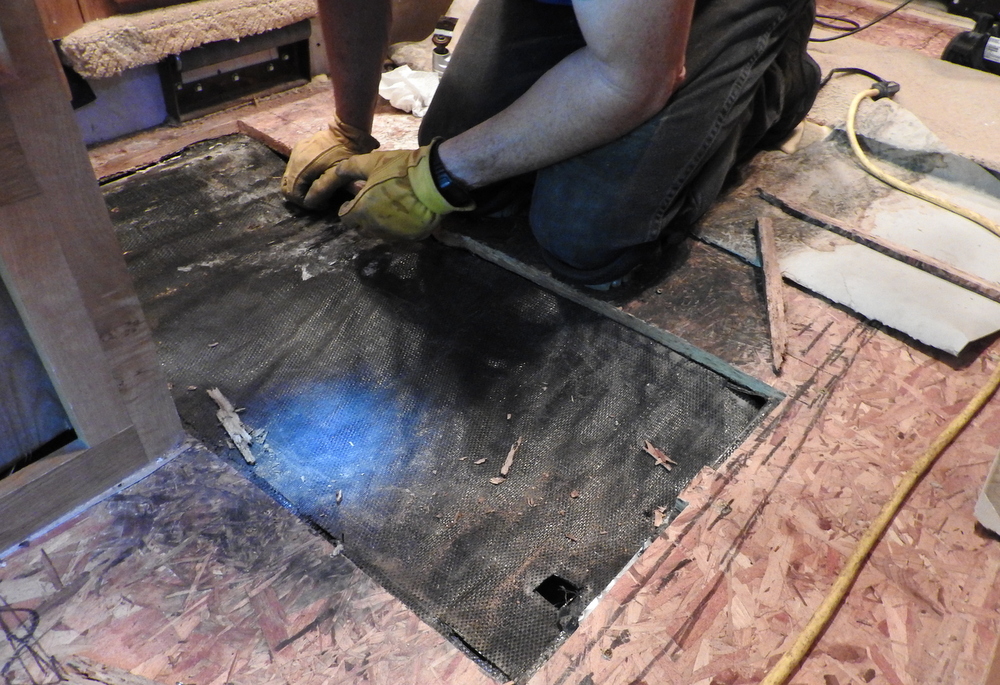 He cut the bad sub-floor out in several pieces. 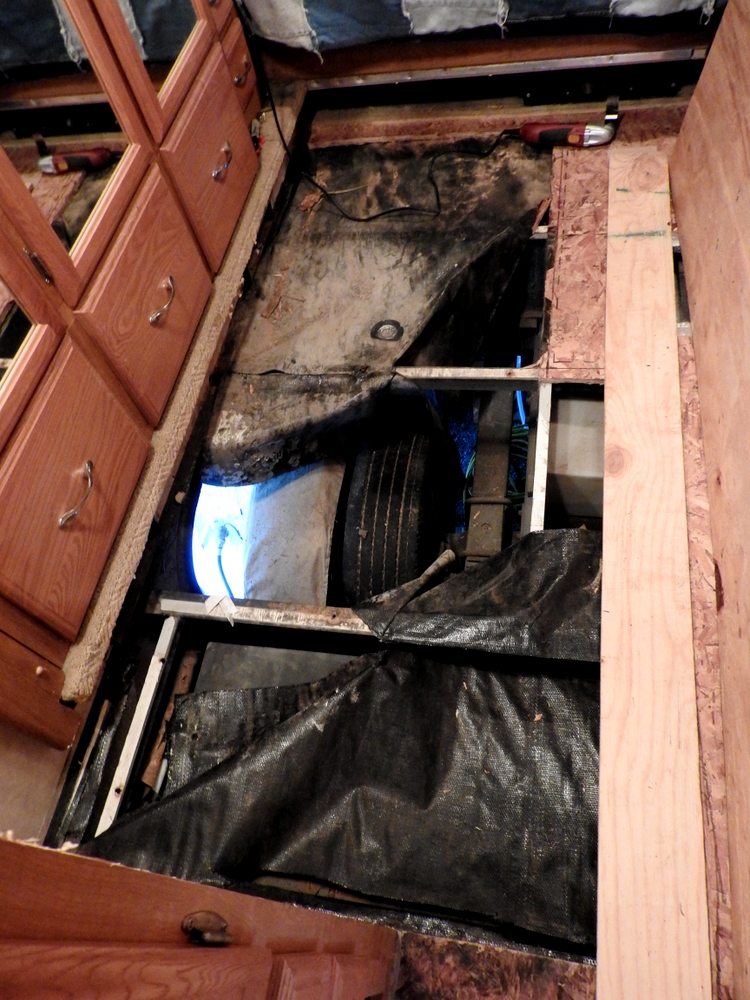 Eventually we had a big hole in our bedroom floor that went clear through to the outside. 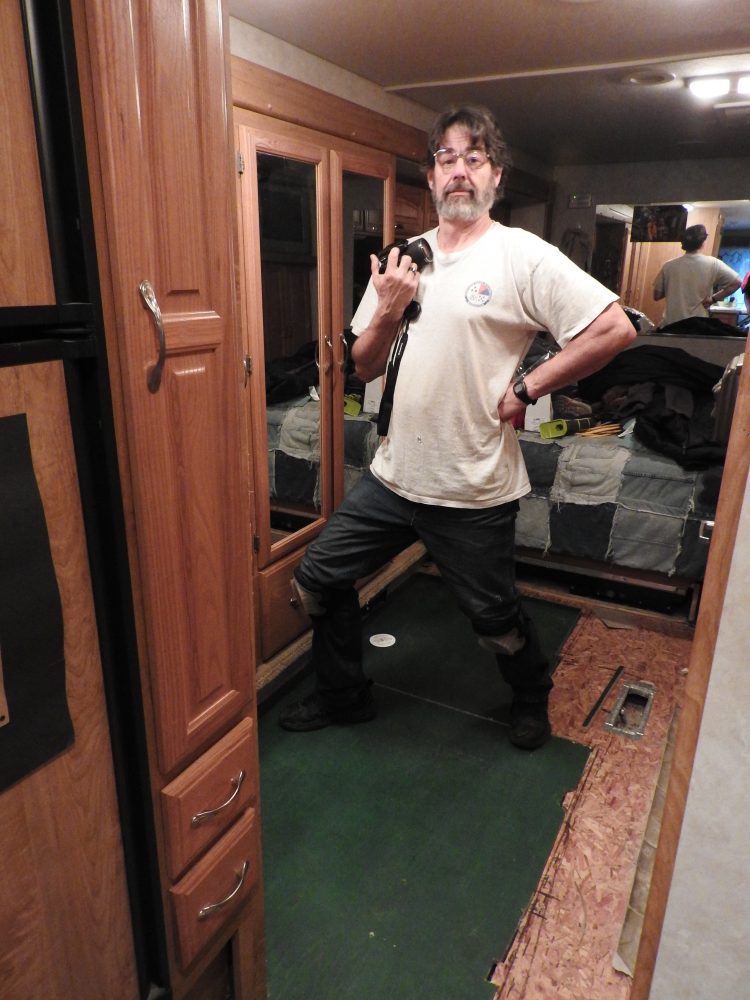 Mark was so proud of himself when he finally got new sub-flooring in. The green paint is waterproofing so that hopefully we won’t have this problem again. 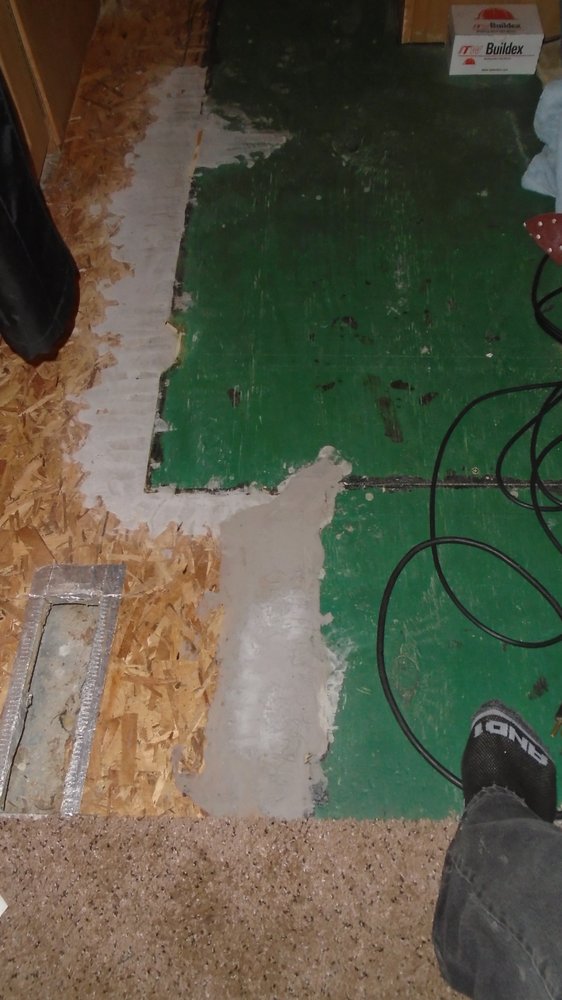 The edges needed to be filled in. 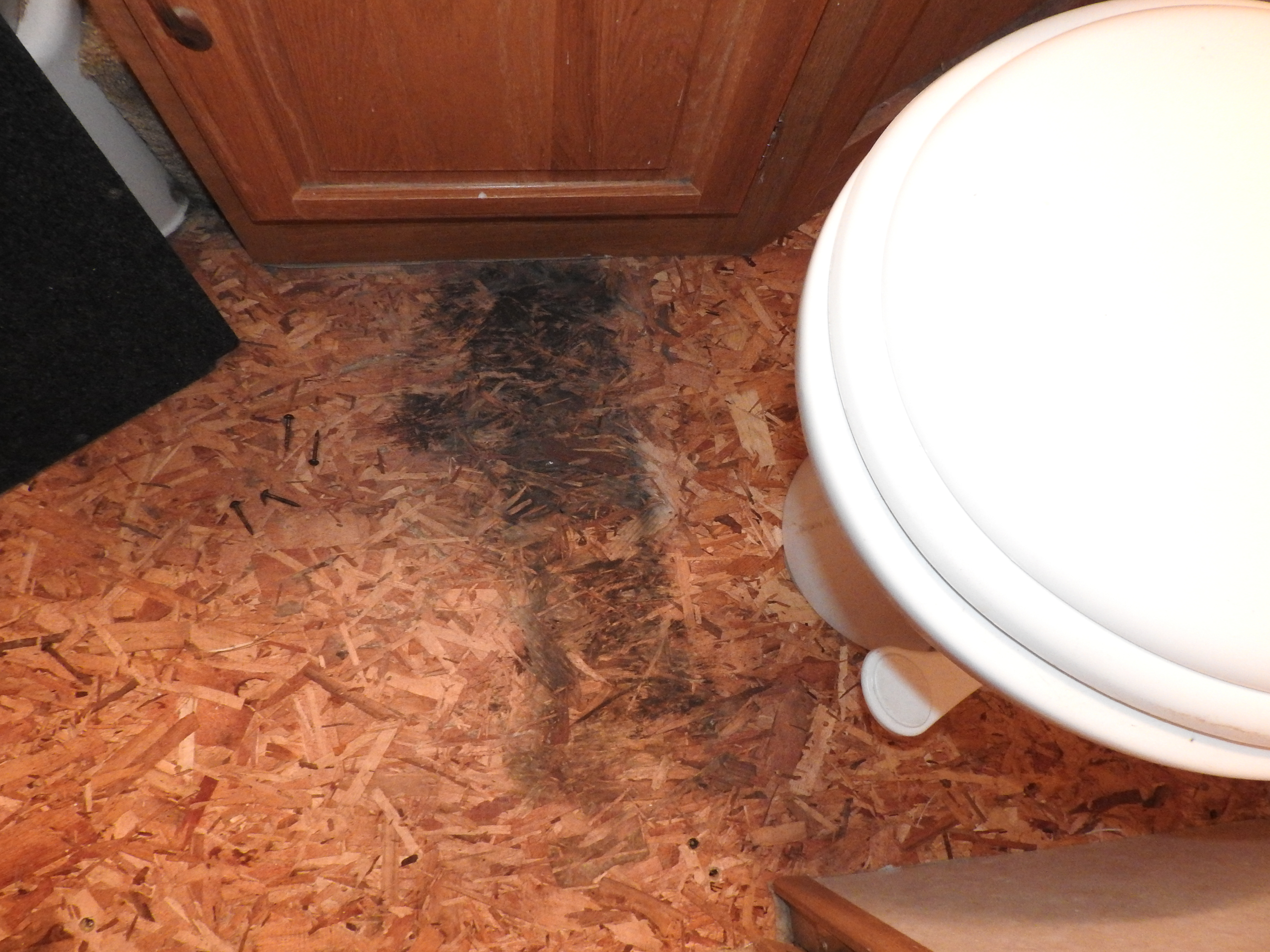 He was dreading it but we decided we should look under the bathroom linoleum too. There was some rot there as well. 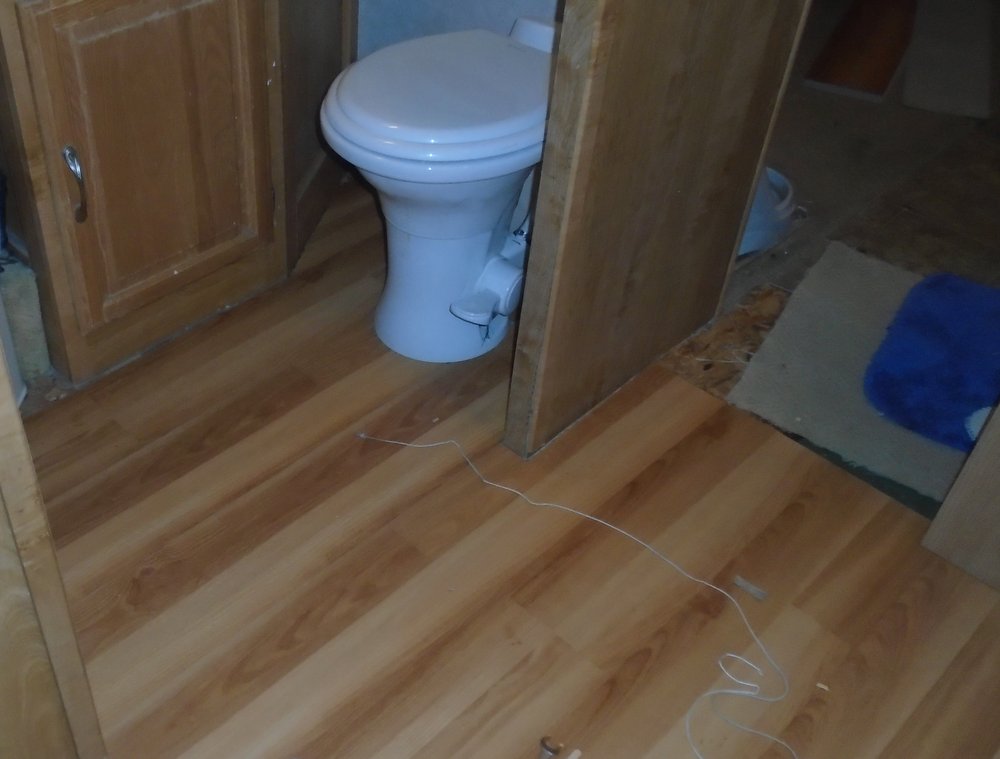 Mark finished fixing all the sub-flooring and began putting our new flooring in. 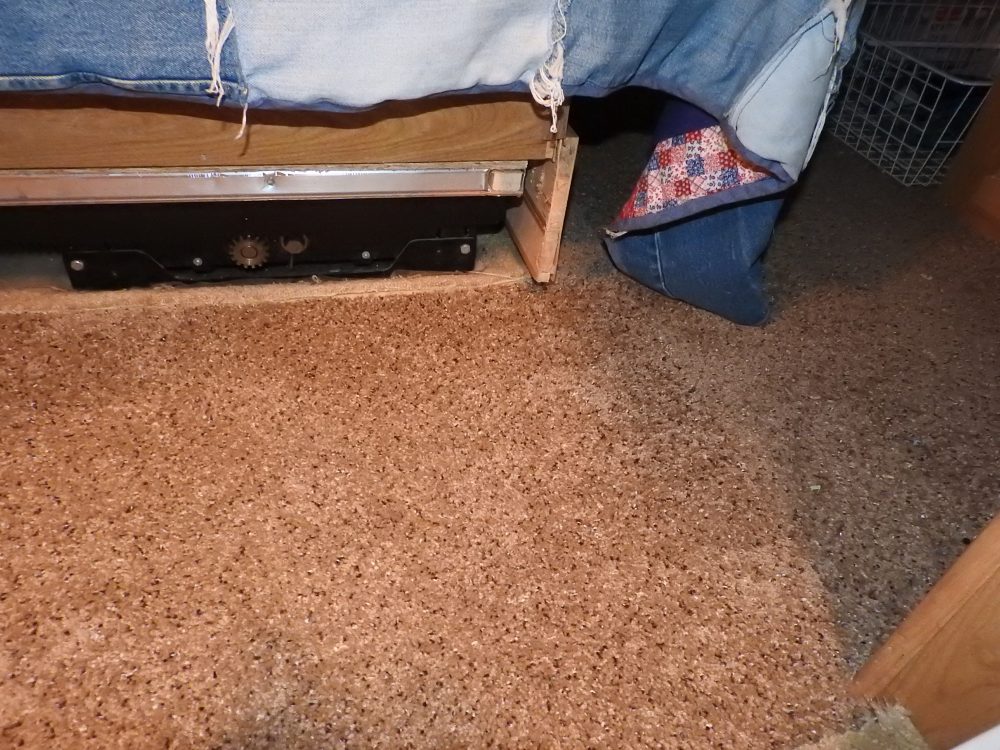 We pulled out the ugly gold carpeting and put carpet tiles around the bed. 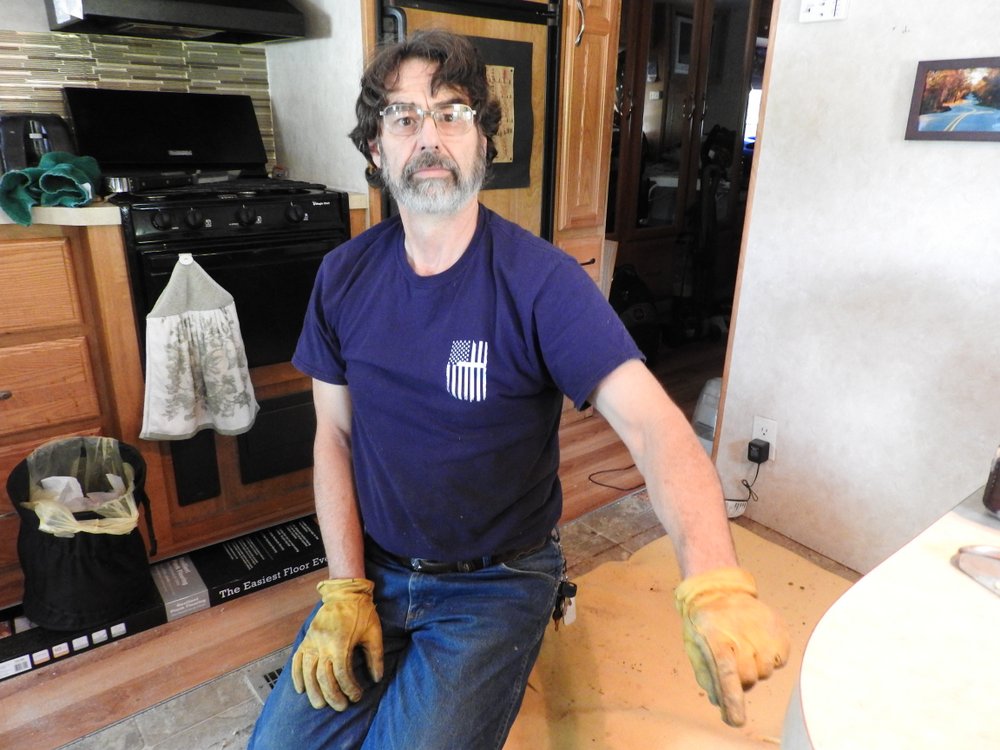 Time to start out here in the living area! 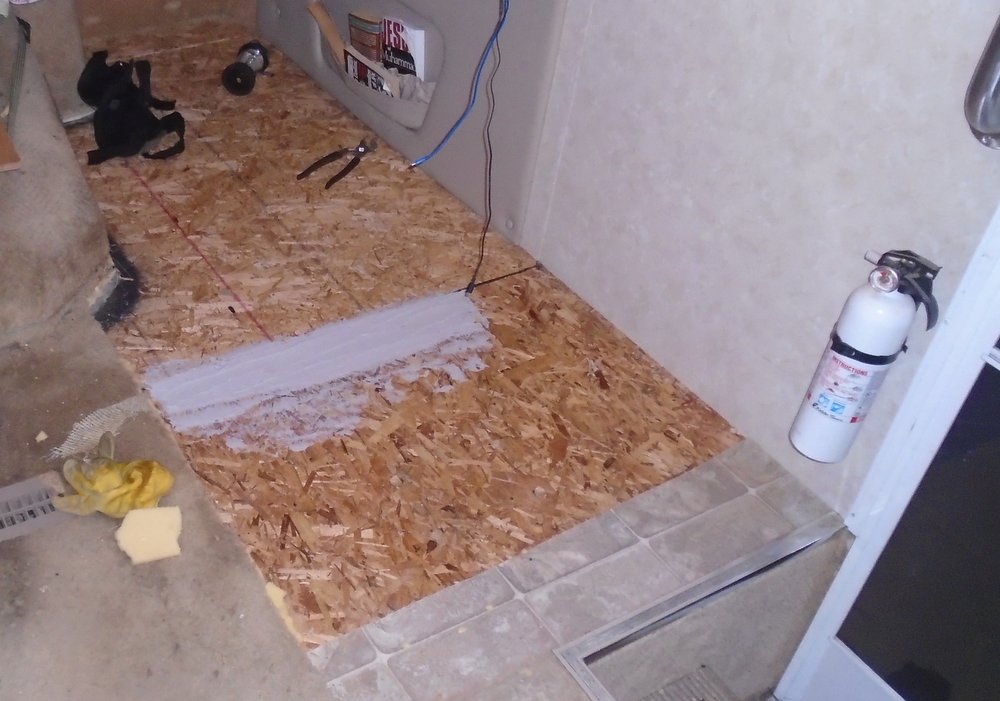 We pulled out the driver’s seat and the passenger seat so Mark could put the new flooring in.  We put them back when we were done. 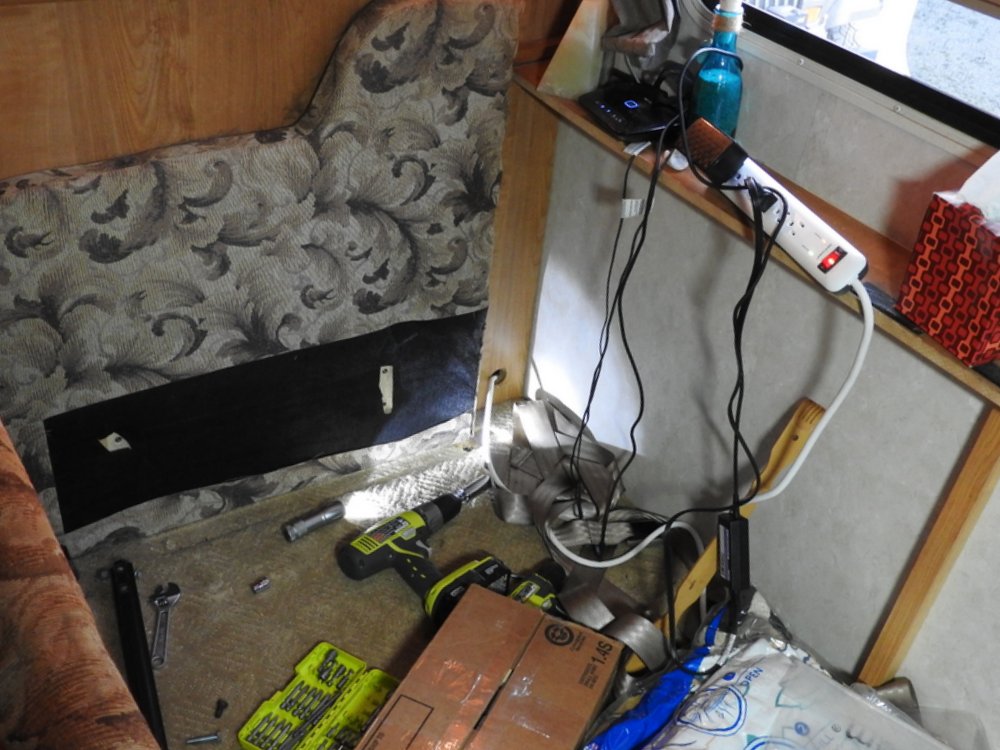 Mark also took the couch out in pieces. 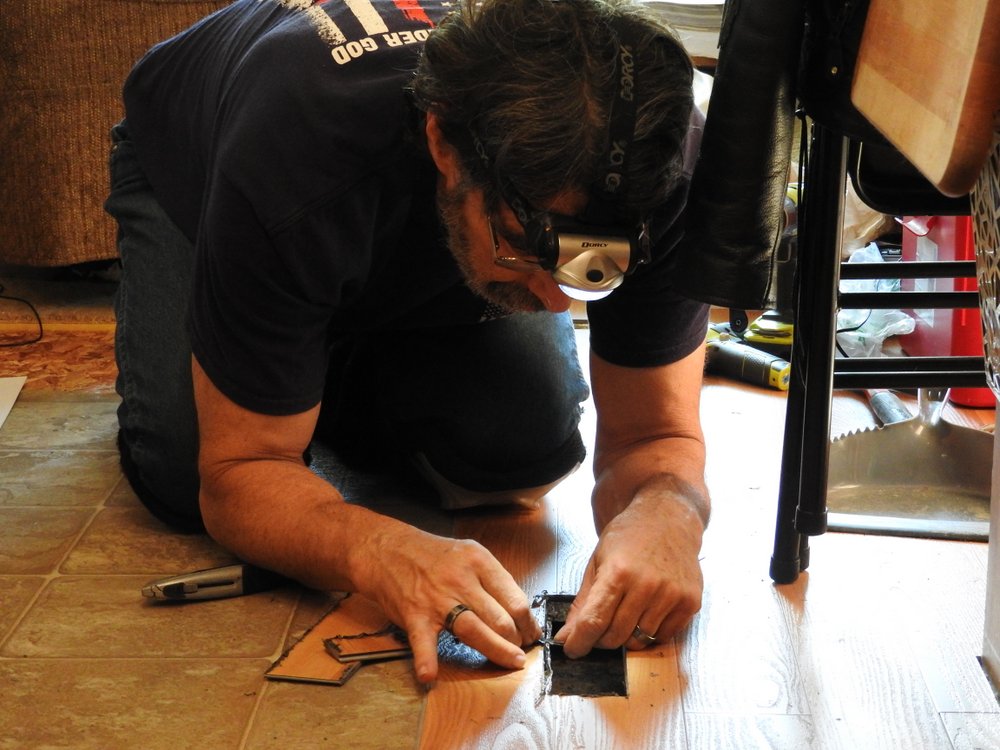 Cutting holes for the registers. 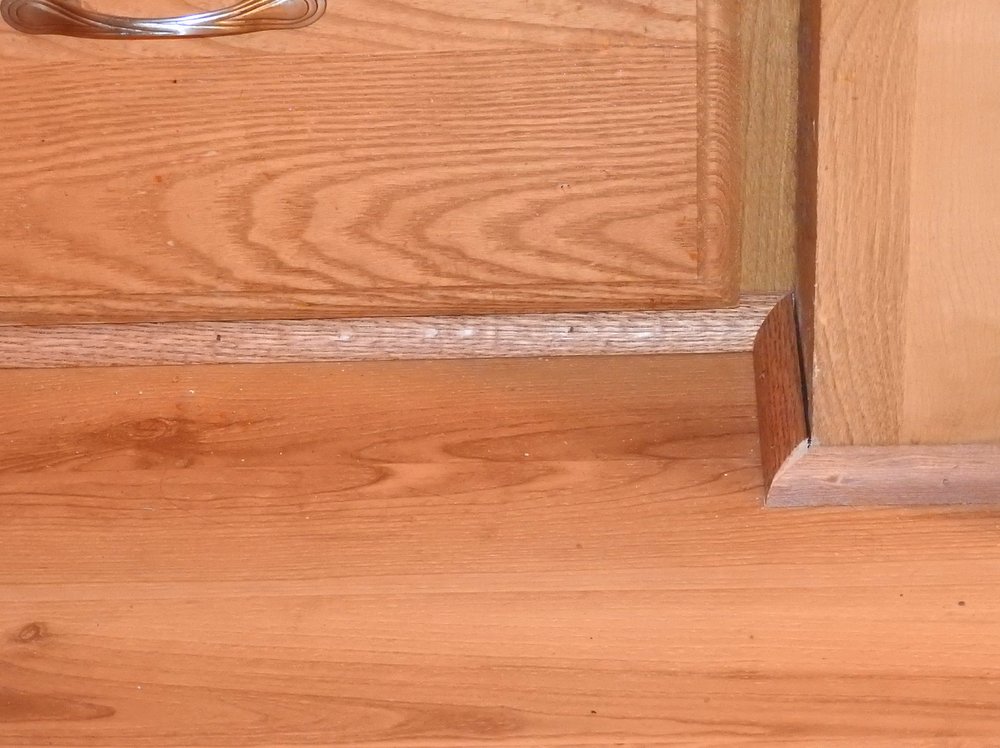 Trim around the walls 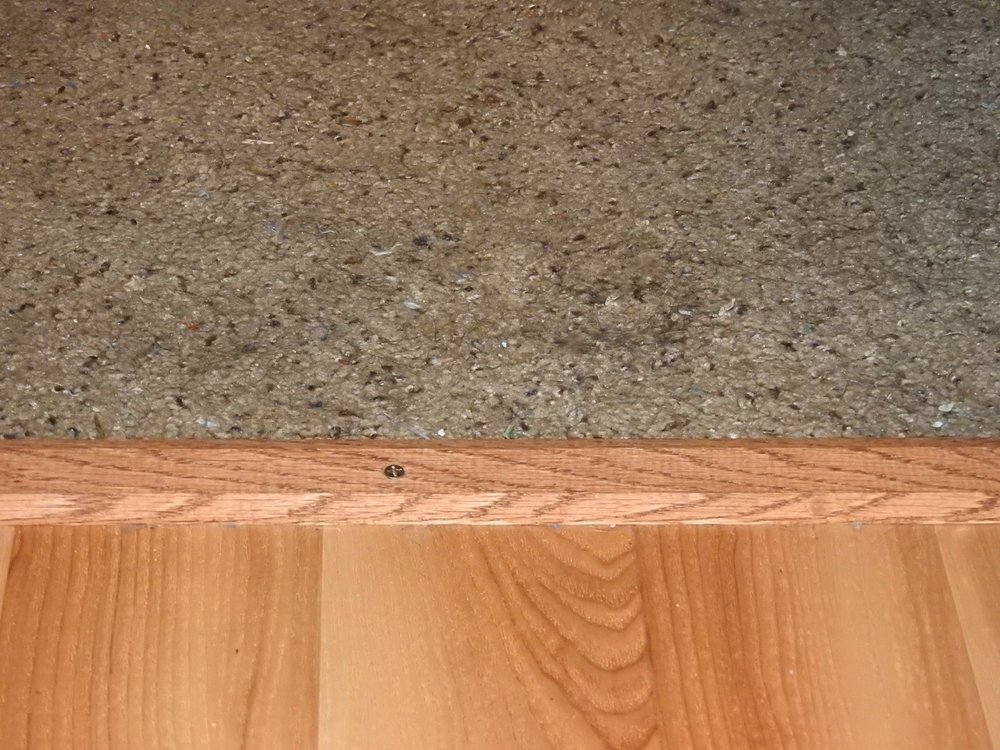 Trim along the edge of the carpeting 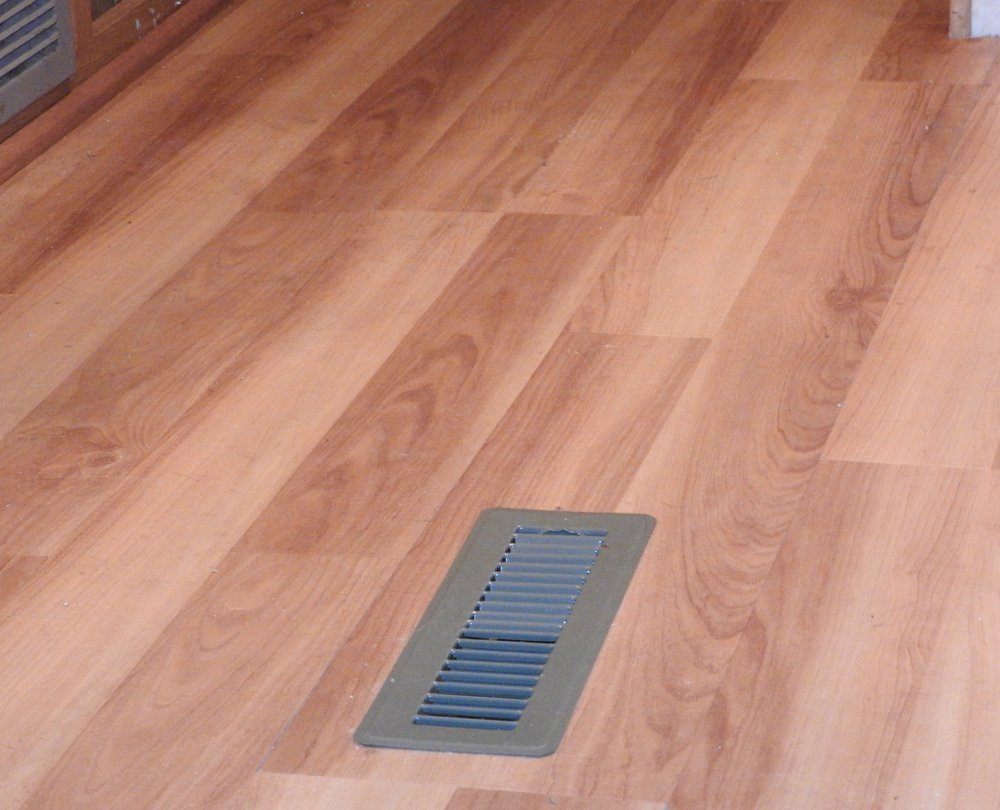 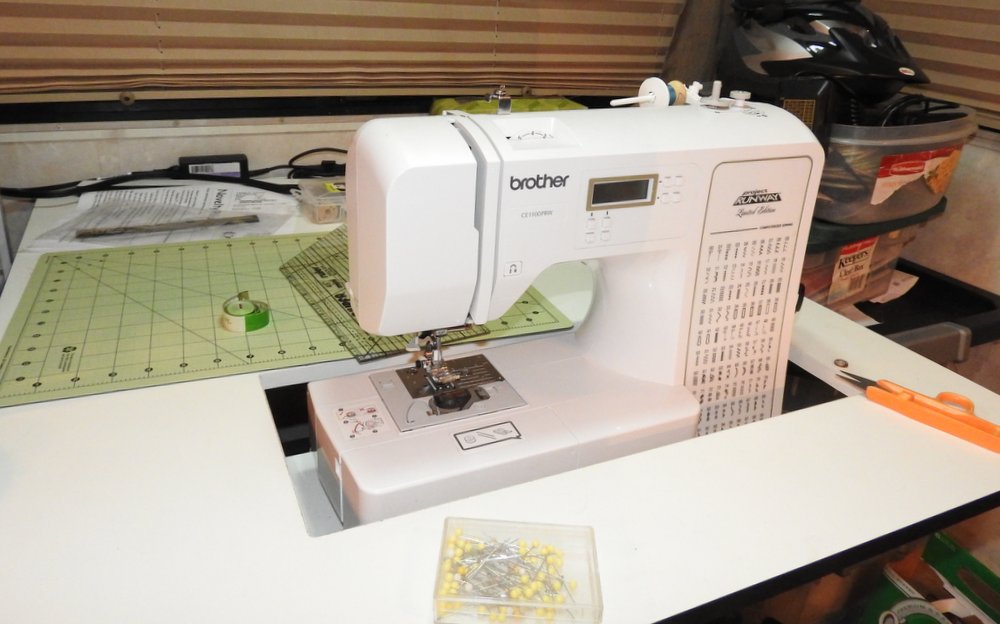 Mark got me a sewing machine table to put where the couch used to be. He can also use it as a craft table or a drafting table because it can tilt.

There are still some things left to do, but we already like our RV better.  Hopefully when we come back next summer we can go back to spending our time exploring Door County.  There’s still an awful lot to see!

2 thoughts on “By request of Judy!”