We have hot and cold running water for the first time in a week.  Praise the Lord!  We took a shower in the bath house before church, and when we got home from church Mark worked on the plumbing and finally got everything running.  It’s lovely to be able to flush the toilet and wash dishes again.  In fact, the first thing I did when Mark told me it was working was get a big glass of water to make lemonade.  I was thirsty!

After church this morning there was a potluck and a cookie exchange.  With no running water last night, I made Pillsbury refrigerator cookies.  We were supposed to bring five dozen in packs of six and pick up as many other cookies as we brought, so I brought home a wide variety of cookies.  Yum!

Tonight is the third Sunday of Advent.  After dinner we will light three candles and read Luke 1:26-56.  This is Mary’s story.  She was a young virgin, betrothed to be married to Joseph.  Yet when God told her she was going to bear the Promised One, she was willing to be the vessel.  God knew she would need support because others wouldn’t understand, so Gabriel, the messenger angel, told her that her relative, Elizabeth, was pregnant.  Mary went to stay with Elizabeth for several months and Elizabeth, filled with the Holy Spirit at her first greeting, attested to the fact that Mary’s child was the long awaited Messiah.  I’m sure that Mary was afraid to tell people she was pregnant, and as we know later Joseph was considering breaking the betrothal because of it, so to have these months of support from Elizabeth must have bolstered her courage for what lay ahead.  God knows we need each other, and that’s what’s so great about being part of a church body that knows us and supports us in prayer.

I’m going to end this post with a Show and Tell.  I think early in our stay here I mentioned that one of the Workampers reminded me of one of my cousins.  I asked my aunt to send me a picture of my cousin, Dave, smiling and she sent me several to choose from.  I showed the picture to Bob and Paige and Bob saw the resemblance.  Today I went over to their RV and took their picture so that I could post the two pictures to show you.  In the picture of my Brim cousins, Dave is standing to the right of his sister.  Compare him with the picture I took of Bob and Paige in their RV and see if you don’t think Dave and Bob look more alike than Dave does with his siblings: 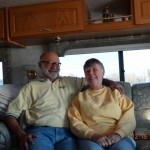 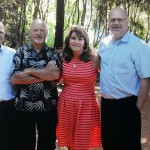