Today started out as usual.  Mark and I were working as tare helpers on piler one.  At one point Mark finally got to use his skid steer skills and you should have seen him…he looked like a boy playing with a new truck!

But things took a dramatic turn a little later.  I’m going to paint a word picture for you here because I don’t think we can get the photo Mark took with his phone onto my computer.  🙁

I’ve shown you what a piler looks like; it’s a big machine with a long arm (called a boom) sticking out the front.  On either side there’s a ramp that trucks cross to dump their beets onto a conveyor belt.  In between the ramps and the boom on either side there are wide conveyor belts sticking out and upward like a bird in flight.  These belts take the dirt that dropped off the beets on their way up to the pile and drop it back into the bed of the truck when the truck has pulled up under them.  The ramp on one side is a high ramp for smaller trucks and the ramp on the other side is lower for semis pulling trailers.  I have a photo of one of the Savage pilers that I took before we started this job. 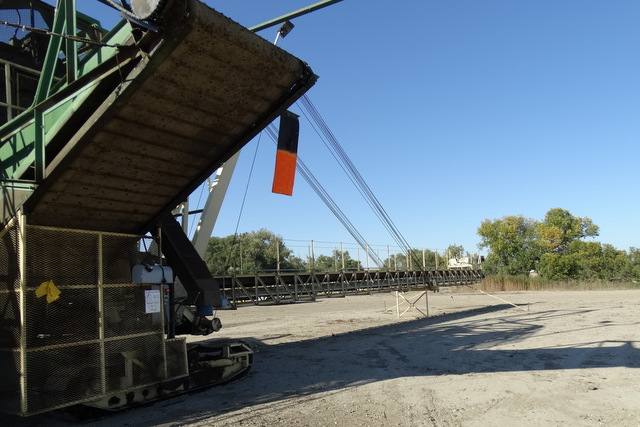 The dirt return in the foreground, the boom sticking out. Picture the boom raised with a 20′ pile of beets in front of it. Then picture the truck bed being lined up with the orange flag for the dirt return!

OK, so now you have an idea what a piler looks like and the function of the parts.  Mark and I were both standing on the low ramp side because there were no trucks coming in on the high ramp side.  We had one of the longest trucks that comes to dump.  The bed of the truck doesn’t go up like a pickup truck; it has a conveyor belt of its own in the bottom that pushes the beets out.  These trucks are so long that they sometimes have a hard time turning away from the pile to get out.

We were watching the dirt return when we heard a noise behind us and looked up.  This part seemed to go in slo-mo in my memory of it.  The boom dropped, then it twisted and the end landed in the pile of beets.  I tried to grab Mark and step back, but the driver of the truck had opened his truck door and was standing outside his cab watching the show.  There was a popping sound and something else fell off the boom and hit the ground.  I tried to pull Mark and myself back even farther but we were trapped.  We weren’t hurt but I was never so happy to have a truck pull out.

As the boom was falling and twisting I was reminded of the news images a few years back of the bridge in San Francisco as it twisted and collapsed in an earthquake.  After the truck left one of the guys that had been working around the piler came running over and realized that the motor was still going.  A switch that was supposed to have been triggered to turn off didn’t, so he had to manually shut it off.  The guy that had been operating the piler was our friend, Rob.  He was kind of shaken up too.

Someone called Todd and told him what happened and as it turned out he wasn’t far away so he came to look at it.  Those of us on piler one had gone over to piler two to see if we could be of any help to them.  Since there are only two pilers and ours was down, all the trucks got re-routed to them.

After Todd called a mechanics service to come and assess the damage, he came over to piler two and called us all together for an impromptu meeting.  He said that he needed several volunteers to work a graveyard shift since we’re down to one machine and these farmers need to get their crops in before they rot.  Rob was the first one to volunteer himself and his wife, Cindy, so now my friends aren’t going to be working with me unless our piler can be fixed soon, which doesn’t look too likely.  Then Todd had to go have a meeting with the farmers and get some of them to agree to bring their beets in at night.

Later Todd came back and brought us all a candy bar.  He said the best thing was that nobody got hurt.  I credit God with that one!